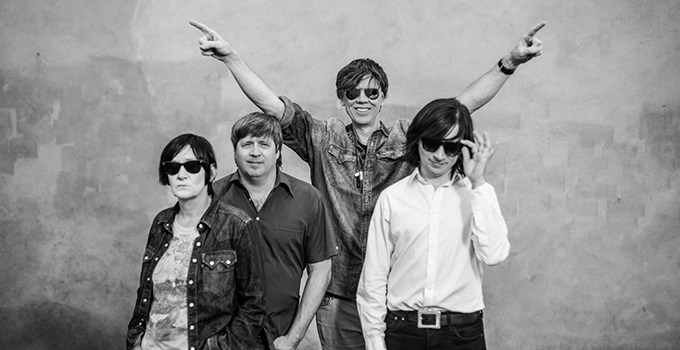 Since 2007, Live At Leeds has been promoting all sorts of new music by getting a whole host of indie, electronic and rock bands together for one day only. Previously Bombay Bicycle Club, Alt-J, and Royal Blood have all played the festival before going on to achieve monumental things. This year's crop will be no different.

For 2015, the Live At Leeds brains have curated an eclectic line up with a huge amount of new and established acts. Headliners for this year include the mighty Cribs following the release of their sixth studio album, For All My Sisters; alt-rock band Dry The River, singer-songwriter Lucy Rose, rapper George The Poet, indie pop act Saint Raymond, garage punk duo Slaves and many more across the 20 venues. Previous Fresh Flesh, Brawlers will be making an appearance alongside the likes of other rising bands, Nothing But Thieves and Pretty Vicious.

To make the day easier for you to enjoy, we’ve collated a list of five acts that you have to see...

Shoegaze and pysch rock are the main ingredients to Menace Beach. Their debut album, Ratworld, released earlier this year, flaunted the band's potential as they created their own little idyllic universe. Transporting from the mundane Monday morning drudge into a world of surf and pysch is exciting enough when done through listening to the album, let alone when face to face with the riffs themselves. We have high expectations for how well these guys will translate live.

Six months ago we cited noise rockers Hyena as Fresh Flesh, and since then the band have been bubbling away creating new riffs and recording live sessions for the like of Steve Lamacq. We’re in no way saying that this is all down to us, but we certainly know how to pick ‘em. Hyena supported alt-rockers Beasts back in January as part of Artrocker’s New Blood Festival and made headway in proving that they have got what it takes on stage. Frontman, Jacob Ball has the confidence to entice the audience, as he hammers out his heavy rock riffs whilst Joshua Taylor, Dom Farley and Reuben Gwilliam nail the rest of the well constructed racket.

Local lads (sort of) The Cribs are taking a headline slot at Live At Leeds this year. Since 2002, these guys have been playing shows, festivals and putting out album after album before recently going on a break to record new studio album, For All My Sisters (out today). Whether you’ve been with The Cribs for the long haul or not, with indie-rock gems ‘Men’s Needs’, ‘Hey Scenesters!’ and ‘Mirrors Kisses’ in their back pockets – pandemonium is surely anticipated.

Brighton-based surf rock band, Black Honey, are sure to make a lasting impression. Lead vocalist, Dakota Clayton has a soft and sultry voice that compliments the seductive surf rock guitars; like a beefier Lana Del Ray sound. Whatever trickles from their guitars and bass makes for a wonderful concoction of indie and surf rock that will be heavenly live.

Distortion, deep tones and scratching vocals are all synonymous with Bloody Knees. Bradley Griffiths' coarse vocals allow for the band to flicker from garage punk to grunge effortlessly, with plenty of room for their versatility. With both genres being dominated largely by Drenge and Slaves, Bloody Knees are slowly but surely making their way to the top. With a reputation of the frontman ending up in A&E after a live performance supporting Wolf Alice, there’s no wonder we at Raw Meat are keen to catch them.

The day before the festival, Live At Leeds are giving aspiring artists the opportunity to make connections in the music industry through the Live At Leeds Unconference. As part of this event, James Brown and Tom Hudson from Pulled Apart By Horses will be giving a keynote speech on the music industry. Live At Leeds are also the offering the opportunity for bands/ artists to submit their own music to a panel of experts who will give advice on recording, releasing and promotion. Afterwards, Leeds locals Pulled Apart By Horses, Dinosaur Pile Up and Allusondrugs will be putting on a party to open the festival.

If you're in Leeds, we don't think there's any better way you could spend this May Bank Holiday weekend.