Halloween season – if you could call it a season – has been and gone, bringing with it a lovely little rock festival in Camden Town called Nightmare Festival. 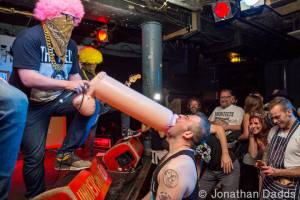 Halloween season – if you could call it a season – has been and gone, bringing with it a lovely little rock festival in Camden Town called Nightmare Festival.

Despite the disappointing amount of Halloween costumes; Nightmare was full of exciting acts that are close to breaking point (in a good way).

Walking the streets of Camden, it was difficult to tell who was a part of Nightmare festival and who was not, but nevertheless, there was still a leftover Halloween buzz throughout the town. With its quirky shops, dirty venues and the ability to lose all inhibitions without fear of being judged, it’s clear that Camden was the best place to hold Nightmare Festival.

The first band we saw at Nightmare did not disappoint. Amongst the many, many bands with ‘dead’/’death’ references in their name, we caught a band simply called Dead. These guys were full of energy that was on par with the energy tumbling out of the amps. For one of the first bands on the bill, they managed to play a smashing set and the audience loved it. Now for the difficulty of finding the band somewhere on the internet… (Don't worry, we've done it for you)

Up next was Tigercub. After just being signed to Blood Red Shoes very own record label and for all the buzz that surrounds Tigercub, you would have expected them to have pulled in a bigger crowd. But, in spite of this, they still pulled out a blinder of a set and blew our minds – again. Unlike other bands, Tigercub don’t try to involve the audience and prance around the stage like idiots because they really don’t need to. Yes, they have energy, and yes, they rule, but they don’t need to do that whole, “let’s go fucking mental” thing because that just does not fit who they are. Tigercub play ace moody grunge music that translates even better live.

Nightmare Festival’s line up was dominated by all kinds of rock, punk and metal, but hidden amongst this were some hidden indie gems, eager to be found. Sykes were one of these bands. Sykes are an electronic indie band that are play some incredible alternative pop music. Singer, Julia, has such a sweet and soothing voice that combined with the electronic sounds perfectly – she’s like Ellie Goulding but not annoying.

Next act we saw, Falls were all kind of epic. The quartet were sprawled across the miniscule venue, The Good Mixer and caused complete and utter carnage – but in a totally good way. Describing themselves as “FUCK ROCK” on their Facebook page you kind of get a sense of what this band are all about; heavy rock music full of insidious riffs and killer hooks and yet, they somehow managing to instil a kind of pop element into their sound. These guys put absolutely everything into their performance. And by everything, I mean they ripped part of Taylor Swift’s ‘Shake It Off’ song into one of their songs and I’m pretty sure no other band will ever top that. They’re like a tamed version of Baby Godzilla, so you can actually watch their set without being in full fear of your life. They were insane and the best band of the day.

The Beasts lads played a storming set at Nightmare. Full of thrashing drums (definitely thrashing as Tom snapped his drumstick in half midway through one song) and gritty guitars, Beasts blew The Good Mixer apart. Playing new releases, old tracks from their debut EP and new, unreleased tracks, they all had the same Beasts essence that will no doubt take them far in the industry. These guys already look like their destined for bigger things.

The Hell. What to say about The Hell. These guys were something else. Launching onto the stage in multi-coloured wigs, wearing their own merch and chucking round inflatable dicks, it makes you question whether what you were drinking was just alcohol. The Hell are a hardcore band from Watford who know how to throw a party. For a hardcore band, it’s surprising how long you can keep a smile on your face for during their performance. Until you get hit in the face with an inflatable dick, that’s not so funny.

Nightmare Festival was another festival full of incredible bands, artists and some weird and wonderful memories. We’ll be back next year for sure.

While at Nightmare Festival Emily also caught up with the lovely Dedwardians' guitarist Gaff, to pick his brains on what he loves, what he hates and what the Dedwardians are all about. Click here to read the interview...

The featured image of The Hell is by Jonathan Dadds.