Garage punk band, Dedwardians, ended our night at Nightmare. It turns out Dedwardians consist of just the right amount of different genres. 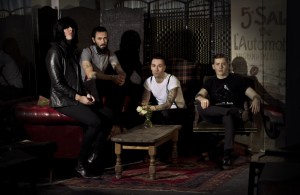 Garage punk band, Dedwardians, ended our night at Nightmare. It turns out Dedwardians consist of just the right amount of different genres.

Dedwardians are an amalgamation of rock n roll, punk and garage and they don’t really sound like anything in particular. Their live performance at Nightmare presented the bands talent as Paul (lead singer) managed to encompass the vibes of an Elvis Presley meets John Lydon presence in his vocals and the drummer completely destroyed his drums.

Here’s what happened when we had a chat with Gaff from Dedwardians before their set. Just to let you know, he was lovely.

Raw Meat: I am in The Bucks Head with Gaff, the guitarist from Dedwardians. So, you excited to play tonight?
Gaff: Yeah, definitely, going to be a hot and sweaty one I reckon. We’re on at nine o'clock so we’ve got a late stint this time. We played the festival a few years ago and we were on like graveyard shift, like one in the afternoon.

So everyone’s going to be drunk this time.
Yeah, well hopefully, it makes for a better audience.

It’ll be really rowdy.
[Laughs] Yeah, that’s what we aim to do anyway.

Okay, so what can we expect from your live performance?
High energy, a lot of sweat and just a good time really.

When you listen to Dedwardians, it’s quite varied; you can’t actually pinpoint what your sound is, so how would you describe it?
Well, a lot of people have said a lot of different things really. There are elements of garage, elements of punk, a bit of rockabilly in there as well. People have said glam but I can’t really hear that but you know, we go with it, whatever. I think they’re the main three elements people really think of but with our sound altogether, we think garage punk - that’s what we define ourselves as.

Is that what you go for, did you want to get a unique sound?
Well yeah, with punk, we didn't kind of say, "We’re gonna go down this route", but it was always in the back of our minds. We didn't want to have a bit of everything and force every genre in there.

No, that would be a bit messy.
Yeah exactly, because as you said it destroys the sound but we wanted to go down a retro garage route.

Good route to take. So your new single, ‘Love Sick’, it got premiered on Clash?
Yeah, yeah that’s right.

What kind of reaction did you get from that?
Yeah, we got a really good reaction actually. We weren’t really expecting The Clash to grab onto it the way they did and it really took off really well. We were really surprised by it and really grateful for it. We had a really good response from it and it’s really helped. Big up The Clash.

When I listen to it there’s got kind of like a dark feel to it, was that an aim?
Yeah, that’s another element that we have – it’s not just a play on the name. We don’t want to be squeaky clean, polished, you know, here we are;  Foo Fighters, stadium rock. We want to be like a bad boy rock band and we wanted to have a sort of twisted feel to it. Not sort of unsafe and unhinged but just… not nice. [Laughs]

When you’re writing your music, what’s the kind of process to it?
Normally, it’s me and Ben, the bass player, we get together ideas and we form a demo of the music and then we put a rough track over it and send it to Paul and Dan. Paul (singer) comes up with lyrics and so forth and then we get into the studio together and just thrash it out really and work it out that way.

So it’s kind of like a team effort then?
Yeah, yeah. It could be one person coming up with an idea but it completely changes once we all get hold of it, and it all just becomes, Dedwardians.

Nice. So there have been loads of good rock albums out this year, what’s been your favourite?
To be fair, as a band - well me personally - we don’t really latch on to new stuff. We’ve seen a lot of stuff written about Royal Blood recently, which is good… I think the new Death From The Above album is really good.

A lot of people have said that, I need to listen to that.
Yeah, it is a really good album, but I can’t think of anything that really strikes me at the moment. I’ve heard a lot from Death From Above and what I’ve heard is really good. Isn’t it a coincidence that they came back when Royal Blood started kicking off as well? Coincidence? Maybe.

I’m not sure what I feel about the Royal Blood… their album, like, I don’t know if you’ve listened to it but it seemed to be a lot of their singles.
Yeah, yeah, I’ve heard a bit and it’s a lot more polished than say Death From Above but I don’t know… there’s obviously a lot of money behind it and they’ve been marketed a certain way but fair play to them y'know, they’re doing well, they came out of nowhere. There is obviously a lot of things going on about them.

Yeah, I think as well a lot of people go on about the fact that they’re a duo but there’s loads of duos.
That’s the thing, that’s the norm now. It started off with White Stripes early 2000, and now people like the Black Keys. It seems to be the thing to do now. I think it’s important for a band to be a band again. It seems more organic to me.

It kind of seems like there’s something missing on stage as well.
Yeah, with the Black Keys, they say they’re a two piece but there’s a whole array of musicians behind them.

Yeah, exactly. Now at Raw Meat, we like to know what you like at the moment, in the past and what you hate. So what’s a thing you love from the past?
Well band-wise, I listened to these before I came out actually, I love The Jam, I really love The Jam. Pistols as well. Um present day… I wouldn’t really say present day but I love The Horrors first album Strange House. I loved the sound of it. It came out in like 2007 so it’s not really that present but yeah, definitely The Horrors’ first album.

And what do you hate?
Everything [laughs]. From the past... Boybands overall. In the present – X Factor.

Good choice. Okay, and what can we expect from Dedwardians next?
The plan is that we’re going to go back in the studio to finish off tracks for the album and to go on tour next year. There’s been talk of a couple European dates as well.

Well thank you for talking to us, it’s been great talking to you!
Thank you very much!

Read the rest of Emily's thoughts on Nightmare Festival by clicking here.