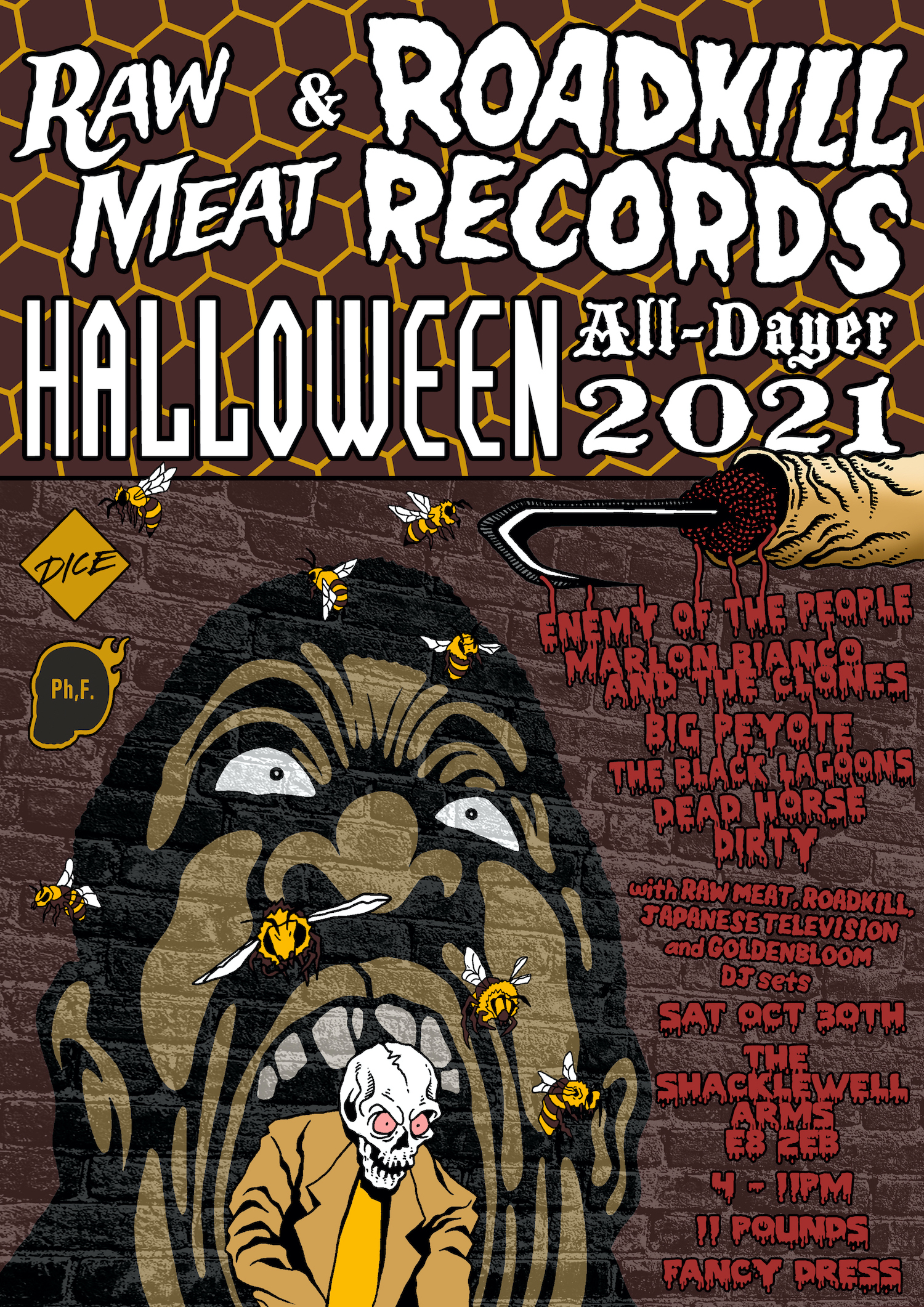 What duo goes together like Carrie and a bucket of blood? Why it's Raw Meat and Roadkill Records of course. We're getting the band back together. And by 'the band' we mean the triumphant return of our annual Halloween extravaganza. And this year the vaganza is more extra than ever.

Firstly, because we didn't get to do a party last year and we're spoilt brats, we're making it an all-dayer (sort of, it kicks of at 1630 because, honestly who has the time). As ever, fancy dress is highly encouraged and we'll be throwing prizes around for best dressed like it's going out of fashion - merch, tapes, vinyl... and, of course, the highly coveted Best Dressed trophy.

So that it isn't too terrifying, here's a little of what you can expect.

As the doors creak open the first DJ set of the day will be from the awesome post-punks Goldenbloom, whose latest single 'FINE' is out now. But first band of the day are the absolutely filthy, Dirty.

Grubby psych-grungers, Dirty are coming up from Brighton to start the day with their suitably nightmarish stoner riffs and gothic-inspired lyrics. Once we've waded through their sludge, we're stepping the energy up a notch with Dead Horse.

These gross ponies bring high energy garage punk with humming organs (pardon?), hazy reverb riffs and sleazy, growled vocals thundering alongside whipcrack beats. Dead Horse will see us through until Roadkill Records' own Chris Blake takes over DJ duties, dragging us through to The Black Lagoons.

These Leeds-based cowboy-psych rockers are drenched in darkness, atmosphere and swaggering riffs. Perfect listening as the dark sets in and the evening begins. Next up, yours truly (Raw Meat DJs) will straddle the decks. Playing... well, probably just 'Monster Mash' and the theme from Buffy The Vampire Slayer, but we'll do it with real conviction.

Next onstage are the absolutely humungous Big Peyote.

Big Peyote's seventies rock riffs and swirling vocals are totally addictive. They bring stadium rock energy to classic British indie songwriting, and will knock your haunted socks off. Time for a quick touch up of blood dripping from your eyes before the blissed out Marlon Bianco & The Clones kick off.

Suddenly you'll find yourself and the stage awash with space-brained doowop as you hack your way through Marlon Bianco's brand of glistening synth jungle. Shuffling lo-fi beats will scuttle between layered synths and laserweapon lead lines until the Japanese Television team take their turn DJing. It's usually around this part of the evening that our editor Finn stumbles to the stage and hands out prizes to the most grotesque among you before collapsing into a Pistonhead-sponsored heap.

Our headliners this year are surf-headed extraordinaires, the one and only Enemy of The People.

Massive party band, Enemy of The People bring an unhinged energy to their surrealist garage surf rock. It's danceable, ridiculous and really loud. A non-stop onslaught of killer riffs, they're an excellent finale before Japanese Television DJs take us late into the night.

We absolutely can't wait to see you at your most revolting. It's been too long. Let's be gross together.