Whilst we’ve been in recovery mode after a messy, painful, dirty and delightful weekend at Reading Festival – we've had time to reflect over the incredible live performances we saw. 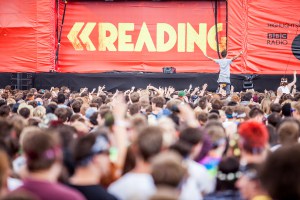 Whilst we’ve been in recovery mode after a messy, painful, dirty and delightful weekend at Reading Festival – we've had time to reflect over the incredible live performances we saw.

From power failures to mosh pits double the size of the NME stage, Reading was as ever, legendary. We asked two of our writers two give us two different perspectives on this year's Reading Festival.

Here are some of the bands that made up Emily Pilbeam's weekend.

This year saw a co-headlining performance from Paramore and Queens of the Stone Age – both of whom were more than deserving of their separate headlining slots. Paramore’s Hayley Williams totally owned the stage, as usual, with her energetic live performance and flawless vocals. Whether you’re Paramore’s biggest fan or one of those people who thinks they’re ‘too cool’ to listen to Paramore because you’re not 12 years old anymore – stop being a prick, you can’t deny how incredible they were at Reading. Not many bands, especially headlining bands, would have taken the well reported power outage so well, but the guys from Paramore laughed, joked and sang a cappella to ‘The Only Exception’ making the night totally unforgettable.

Putting Paramore and QOTSA on the same bill is a bit of a strange one, but to have them co-headline a festival together is just plain weird. Surprisingly though, it worked. Queens of the Stone Age took to the stage with ‘You Think I Ain’t Worth A Dollar’ before quickly launching into ‘No-one Knows’. Each member of the band played with total ease and just oozed cool and confidence, which makes you wonder why they haven’t been headlining festivals for years. Not only was the band’s setlist and live performance insane, but the strobe lighting was hypnotising, creating a mystifying atmosphere that went perfectly with the band’s sound. Queens of the Stone Age just completely killed it. In a good way, obviously.

Rock-duo Slaves seem to have exploded of nowhere this year. Since their tour with Blood Red Shoes and their slot on the Radio 1 Rock Week back in May, Slaves have grown and grown. Their set at Reading this year proved just how much this band has achieved in their short career. Slaves played to a packed out tent at the Lock Up and put on a performance and a half. Gracing the stage in their braces, seventies style and wonderful Kent accents, Slaves put out the sort of raucous punk sounds that are sure to put them on the NME stage next year.

Dolomite Minor brought their gritty rock n roll to the Festival Republic Stage and it was packed with a punch. Singer and guitarist, Joe Grimshaw’s moody stage presence and eerie vocals sent chills through the audience whilst riff upon riff were bellowed out. Be sure to see this band all over the rock scene next year.

Bombay Bicycle Club’s recent album So Long See You Tomorrow was the album that launched the band to further heights. Most people – most good people – already knew a bit about Bombay Bicycle Club, but since So Long See You Tomorrow was released, Bombay have been on everyone’s mind. Their set at Reading this year was absolutely phenomenal and one neither the band nor the audience will be forgetting for a long time. From the background animations, the strobe lighting and the purely magical performance – Bombay had it all.

Somehow, Marmozets found themselves on the bill for Reading & Leeds twice in one day – even if this was by mistake, the band took it in their stride and totally destroyed both the NME tent and the Pit stage. It’s very rare for you to have such a powerful and captivating singer as Becca Macintrye; her performance shows just how much she feels towards and believes in their music and it’s actually really enjoyable just watching her without pushing and shoving people in a moshpit, like you might normally expect to. Playing two shows within hours of each other, you might expect their second set to be less impressive, but no. Rising to the circumstance, Marmozets played their powerful math rock with vengeance and nailed both sets.

Our lads in alt-rock band, Beasts had the honour of opening up the Pit stage on Saturday and boy did they do a good job. With a set full to the brim of riffs, thrashing drums and ferocious vocals, the band caused general grunge-like chaos; making them ones to watch in the coming months. From Kurt Cobain-esque tones and Pulled Apart by Horses’ style hooks -  Beasts have got it all.

Yep. That’s right. You Me at Six were amongst our favourite acts at Reading this year. Whether you think that’s cool or not does not concern us. Their performance was tight, well-rehearsed and, to be honest, pretty fucking amazing. Josh Franceschi’s character and raw passion seared through their whole set, and Chris Miller’s guitar instrumental showed that this band aren’t just about their frontman. Although Alex Gaskarth’s (singer of All Time Low) appearance on stage was slightly questionable, the rest of the set was flawless. This band put on an impeccable live performance and it just proved that these guys are more than worthy of a headline slot in years to come.

Drenge have been slowly rising to the surface all year and their set at Reading was the summit of that climb. The tent for Drenge was packed to the brim of 'lads who were ready for it to go off'. The crowd were lethal for ‘Gun Crazy’ and ‘Bloodsports’ and by the end of the set, there was a moshpit twice the size of the stage. Pretty impressive considering the sound system wasn’t tip-top. Dressed in girls dresses (pretty sure Rory was wearing a dress I own better than I ever could, but whatever), Drenge were dressed to impress.

So, there you have it, another year, and another Reading festival gone. Now it's just a matter of recovering in time for next year.