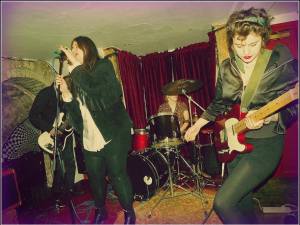 If you like garage, psych, surf, punk and plain old rock n roll then chances are you will have already been to Roadkill, one of London's most exciting sixties influenced nights. Aces & Eights is the perfect venue for this sort of night, specialising in whiskey and pizza, and Heavy Leather have already played host to bands like Loom, (our favourites) Love Buzzard, Voodoo Binmen and Dedwardians.

Roadkill is the first Friday of every month (so you've just been paid), they put on three bands before the DJs go on until two in the morning, and it costs £3. There's not much not to like.

07.11.14 will see Deathbeams play their grungey alt rock before Miscalculations freak everyone out with electro punk rock. The headliners, The Cracked Belles are not new to us at Raw Meat towers. We've seen them at The Garage and the 100 Club and every show has blown us away. They play modern blues over hip hop influenced beats, and every one of the Belles puts mad energy into their instrument. They fall somewhere between Janis Joplin and The Sensational Alex Harvey Band, with a bit of The Gossip thrown in.

Amazing as all of that sounds, the real reason we'll all be there drinking whiskey and eating pizza is the Raw Meat DJ slot. Last time we let Darren DJ this happened.

See you at the bar.