Roadkill Records are back with another incredible Summer weekender, and yours truly are DJing the Sunday hangover shift. Enjoy a run down of what we think of Sunday's line-up. 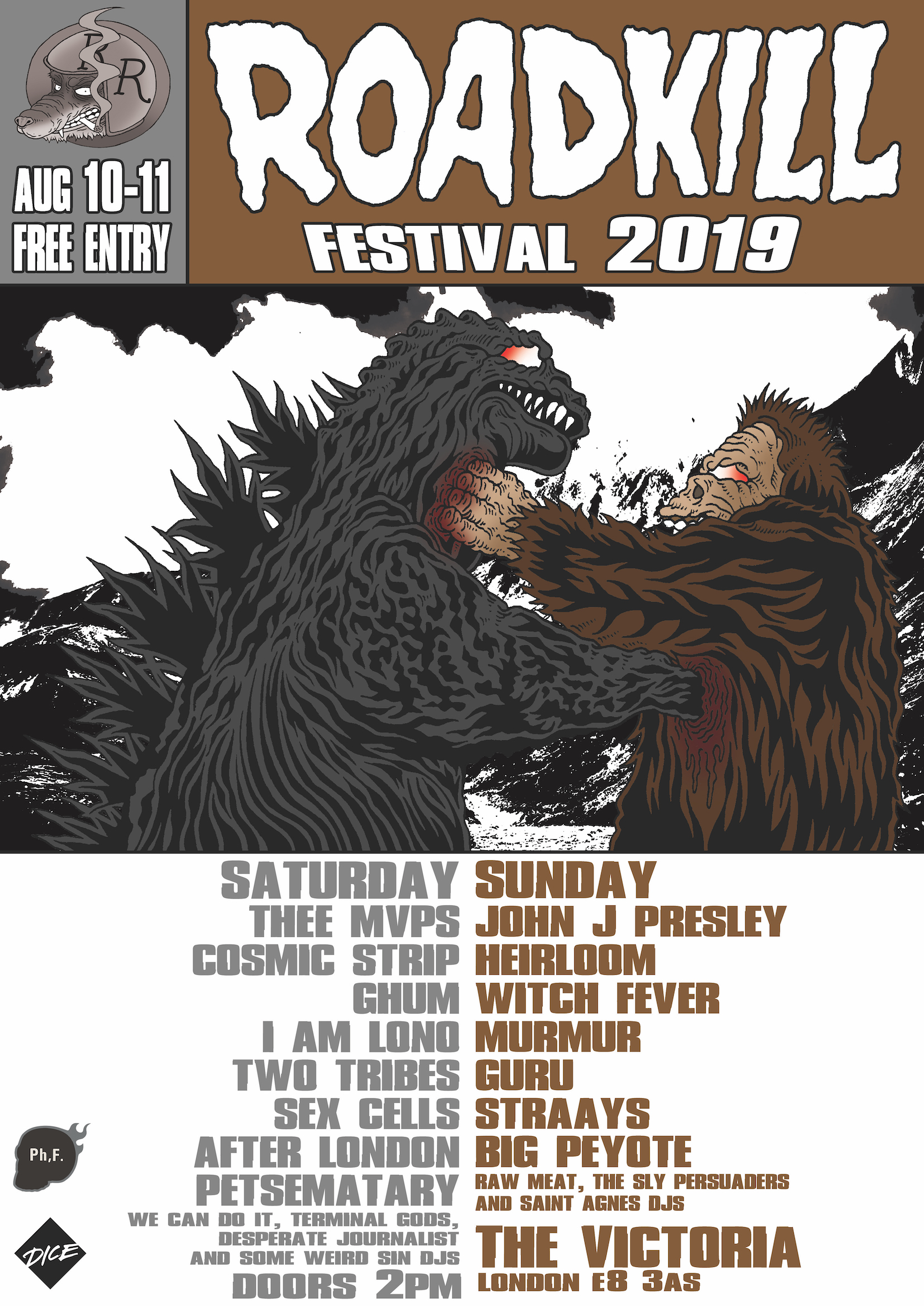 Roadkill Records are back with another incredible Summer weekender, and yours truly are DJing the Sunday hangover shift. Enjoy a run down of what we think of Sunday's line-up.

Here we are. Day two. (Not literally.) You woke up in your clothes half on your friend's sofa, half on the floor. But it's two o'clock now (not now, in the future) and you're starting to feel ok. Actually you're ready for round two, and what's that? The greatest DJ you've ever heard? It is! It's Raw Meat DJs easing you in to that first pint of the day and it actually... yes, it tastes good. You're good to go. (Again, not now, on Sunday).

The sweet melodies and Americana-tinged indie of Big Peyote will be the first band to soothe your sorry soul this Sunday. Look forward to full arrangements, beautiful harmonies and sneaky little fuzz-lines creeping through the cracks.

Straays are up next and there's not a lot of their music lying around the internet (yet), but from what sleuthing we've been able to do we can tell you that they're built on stonking riffs, big choruses and (deep, deep down, hidden really well) a grungey love of sixties girl groups. Similarly riff-heavy Guru will then take the baton, offering up relentless vocals and brick-wall bass lines. The vocalist is a serious force to be reckoned with and, coupled with the band's wall of grunge-punk goodness, will surely absolutely kick the teeth in of their early evening set.

Staying lad-heavy for the time being, Brighton's Murmur keep things fuzzy with scorching hot guitar lines and winding vocal melodies. They're grunge through and through, meaning you'd better get ready for those choruses.

And, as the evening draws near so the grunge gets sludgier with Manchester's brilliant Witch Fever. They're heavy without losing the power of the vocal melodies as they roll off killer bass lines and into tidal wave drum beats.

Main support on Sunday will take the shifting form of Heirloom. With vocal lines soaked in drama and guitar lines that straddle The Doors and Television while post-punk droning synths and hammer horror organs ominously rumble in the distance.

Finally, topping off a day of sheer darkness, the one and only John J Presley. Bringing Nick Cave lyricism to spaghetti western shimmering guitars and foot-stomping fuzz, John J is a bit of a legend to be honest. Screaming guitar solos and jack hammer beats frankly struggle to keep up with dust-n-whiskey-soaked vocals. In a word; epic.

We asked Roadkill's Josh Cooper if he wanted to say anything about the weekender. He replied, with characteristic gleeful enthusiasm,

"Just that we’re stoked I guess! The last one was special because it was the final gig we did at The Lock Tavern, which is where we started the weekender. So we really wanted this one to be a step bigger - bigger venue, bigger garden, more bands. Most of the line-up are friends and artists who’ve played for us before, but there are a few in there we’ve been aching to have on for years and finally got ‘em - namely our two headliners.