It is time, my friends, once again for us to get spooky. 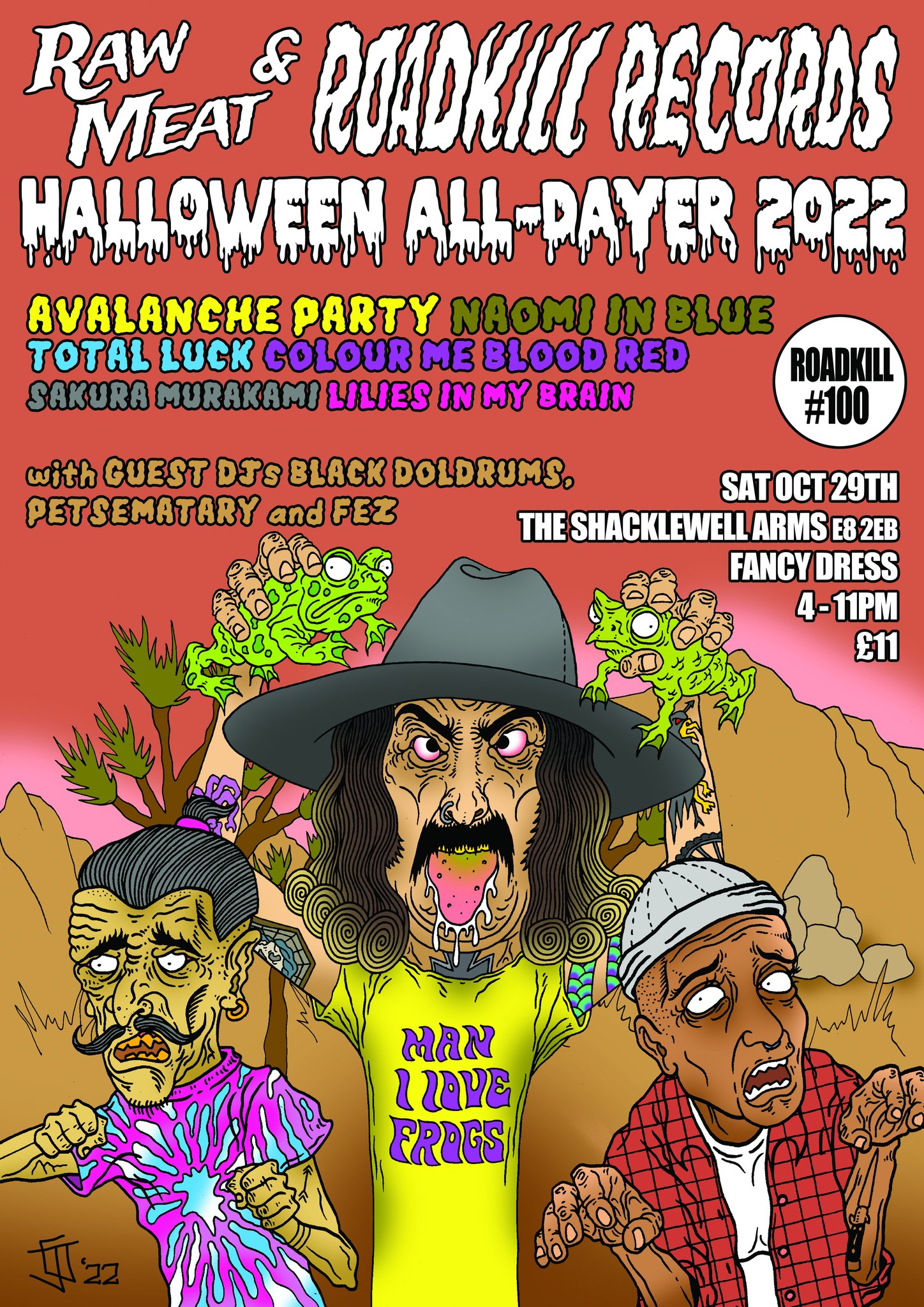 It is time, my friends, once again for us to get spooky.

At Raw Meat towers there are few things we like more than dressing up like idiots. But those few things are bands, beers and our friends at Roadkill Records dressed up like idiots. So you can probably imagine how excited we get when this time of year comes around.

First up you'll see Lilies in My Brain, formed in 2020 the duo write rhythmic hooks with just a brush of distortion. They combine PJ Harvey delivery with Bloc Party whip-crack riffery. Their album 21 = 2a + 7 is out now.

Next onstage is the cyclical psychedelia of Sakura Murakami. There's minimal listening available, but what there is shows a meditative appreciation for the hazy, wavy and wobbly world of groove-jam songwriting.

As the darkness draws in we can enjoy the latest project from members of Sly Persuaders. Now known as Colour Me Blood Red, the band wade deep into synth driven psych-rock soundscapes, but retain the surf scuzz riffs of their previous releases. Kind of like if you imagine Dead Boys were darkwave and had Hendrix on guitar. With nothing released yet, we'll have to keep this one a surprise, but if you dig into their Insta you can find some sneak peeks.

Next, the haunting and vindicating panic of Total Luck. A perfect slice of the No Wave that's taking over, the Brummies bring screeching riffs and art punk intensity to their hardcore tinged alt-noise magic.

Our penultimate act is the irrepressible Naomi in Blue. A dangerous, snaking master of melody, the band wind country shuffle rhythms around shimmering riffs and charismatic, honest lyricism. Their live shows shift between emotionally raw and raucous, absolutely not to be missed.

And, finally, the brooding garage punk of the one and only Avalanche Party. Weird, wonderful and built to party, the band manage to creep between swaggering glamour and feral reckless abandon. Expect huge sweeping vocal lines over thundering anthem riffs and moments of melodramatic rock n roll.

Somewhere between this wall to wall line up, we'll be giving out goodie bags of Raw Meat and Roadkill Records merch to the best/worst dressed. And you can also look forward to DJ sets from none other than dark-pop peddlers Petsematary, progressive psych rockers Fez, and none other than post-gothic electro dark-punks Black Doldrums.

So dust off the fake blood and brush up your bats. We'll see you there for murder on the dancefloor.