Brighton three-piece Spit Shake Sisters play a messy blend of garage and psych, evoking Ty Seagall as much as the Stooges in their reverb-drenched, lo-fi sound. 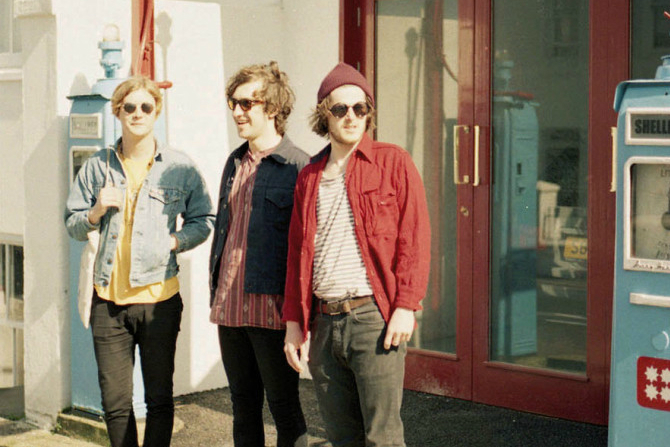 Brighton three-piece Spit Shake Sisters play a messy blend of garage and psych, evoking Ty Seagall as much as the Stooges in their reverb-drenched, lo-fi sound.

Spit Shake Sisters have earned a reputation for their excellent live shows, especially in their hometown of Brighton, but they’ve just come off of their first big European tour, which could spell big things for them. Raw Meat got a chance to chat with Harrison, Spit Shake’s guitarist and vocalist, and had a chance to pick his brain about Brighton, Marseilles and the Psych resurgence.

Raw Meat: How's it going?
Harrison: Not too bad - we just got back from our first European tour, our first real tour. We’ve all just got back to England, and we’re just exhausted. Our last show was only two nights ago.

But it went well?
Oh yeah, it was great. An amazing experience, and better than we expected. The furthest we’d ever been in England was Nottingham. So this was really new for us, you know?

Anywhere you really liked?
It might sound odd, but I really loved Marseille. I had a great time there - it’s a beautiful city, and I’d absolutely love to go back. And so many people turned up, it was absolutely rammed. I mean, our best show was probably Paris – there was a massive buzz , I feel like they really enjoy the type of music we make out there.

What should people expect from your music?
What we do has its roots in garage punk, but there's also a very strong psych influence. But we consider ourselves closer in a lot of ways to the American psych scene, certainly in terms of what we listen to regularly. We have a lot of admiration for the current crop of American bands and what's coming out of there. You can really hear that in our music.

Psych's an interesting word... do you see the British equivalent as falling short of the US standard?
A lot of the bands calling themselves "psych" over here in Britain... well, they're good bands, and I don't want to take that away from them, but sometimes it feels a bit like a marketing scheme. Psych is seen as quite cool at the moment, but really some of these guys are no different from nineties grunge bands or eighties bands. They sound more like Nirvana than they do July. For me, psych is about the sixties and bands doing something strange, something different. Psych is cool at the moment, so bands are going to call themselves psych, you know.

Anyone in particular you'd like to call out, Harrison?
[Laughs] Yeah, but I don't want to come across as that kind of guy. I think there's definitely bands in the public eye being billed as the face of British rock n roll, but they're just as manufactured as One Direction. It can be a little spineless. We listen to a hell of a lot of American bands. We’ve just been on tour with the Growlers, we saw Tijuana Panthers last night. It’s amazing when people like that say, “Oh, we really like your band.” You feel like a fan boy. It’s a real compliment.

I think it's interesting that Spit Shake straddles two sides of the fence - there's your stripped down Stooges, garage rock side, and your sixties, more prog side. To some people these must seem like total opposites, different ends of the spectrum.
Absolutely. But to me, Psych is very much a sound. Bands might have different influences, but really it's that sound – drenched in reverb, lots of echoes, quick repeats on the vocals. It’s not a polished sound. A lot of it is really about the way we record our music. That’s where you can find what we mean when we say psych, it’s really all about the sound.

You've got Tame Impala listed as one of your influences. They've sort of become the face of the modern psych resurgence, albeit from a different angle to yours.
We love all kinds of music - we sound nothing like Tame Impala, but our bass player digs their Paul McCartney bass sound, the groove they bring. I'm brought up on much more of a punk diet. That's much more my thing.

Am I right in thinking you did a Stooges cover set? And a Black Sabbath one?
Hah yes. Those were both fantastic nights. The Sabbath one was one of the best nights of my life. They’re both bands for which we have nothing but respect, and we found that their sound really translates well into our instrumentation and approach to performance. I mean, we grew up listening to this stuff on repeat, it's amazing to channel that live.

Your new single is 'Jesus Was a Homewrecker' and it’s a really fun song. It’s quite straightforward until the time signature change, which is a cool moment and something a bit different. What were you guys going for there?
That song's going to be on a 7" we have coming out soon. When we started out we were very riff focused, and now we're trying to mature, do stuff a bit differently. So many songs these days you just know where it's going, we wanted to prove we could experiment, drop the time signature right down with no count in and just rely on our own sense of timing. It's about feel, it's about being musicians. We want to show the world that we're musicians.

We experimented a bit with that sort of time signature change on our first EP, Postmodern Puppet Show. We don’t always want people to know where we’re going, we want to be the sort of band who can do stuff like this. In my eyes, we’re playing punk rock, but we’re doing it cleverly.

That's awesome.  And you guys are all representing Brighton?
None of us are actually from Brighton originally, but we all moved there to find likeminded people, and it worked out. To be clear, I'm Brighton through and through. We've sort of become a flagship band for a night called Late Night Lingerie in Brighton, which is coming up to its 27th monthly performance. There's going to be a London version at the Old Blue Last. People ask us if we're going to move up to London at some point - and I tell them that we love London, we get a great reception, but nah, we would never move to London.

Ouch. What’s next for you guys?
We’re playing with Black Lips in August at Concord. That’s going to be amazing. We’re planning to go record some more and just keep on gigging. We’d love to make it out to America. Plenty more to come.

Spit Shake Sisters are definitely in the ascendant at the moment, and now is the time to catch them. Fans of choppy guitar, tape echo, hair, and Big Muffs could do far, far worse than the Sister’s stripped down efforts.