Raw Meat favourites, The Burning Hell, have released this monster of a video for ‘Amateur Rappers’ directed by Heavyweather Productions. 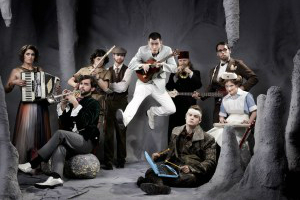 Raw Meat favourites, The Burning Hell, have released this monster of a video for ‘Amateur Rappers’ directed by Heavyweather Productions.

It’s not very often that a band really is able to bring something new to the table but The Burning Hell manages just that. Songwriter and singer, Mathias Kom, successfully combines great music with sardonic and humorous lyrics that actually make you laugh – instead of so many lyricists that try (and fail) to be funny. The video adds to the comedic value of the song as the band spend most of the time in the back of a limo looking like they’ve just walked off set for Macklemore’s ‘Thrift Shop’ video. In other words, fresh.

You can catch the coolest, craziest and hippest Burning Hell almost anywhere in the UK throughout the rest of the year – before they hit big or die of exhaustion, either due to becoming super famous or through excessive touring respectively, (the band played 10 shows in 24 hours between the Netherlands and Slovenia).