At Raw Meat we like to celebrate an important records’ birthday by reviewing it. Happy 45th birthday Closing Time, originally released 06/03/1973 on Asylum Records. 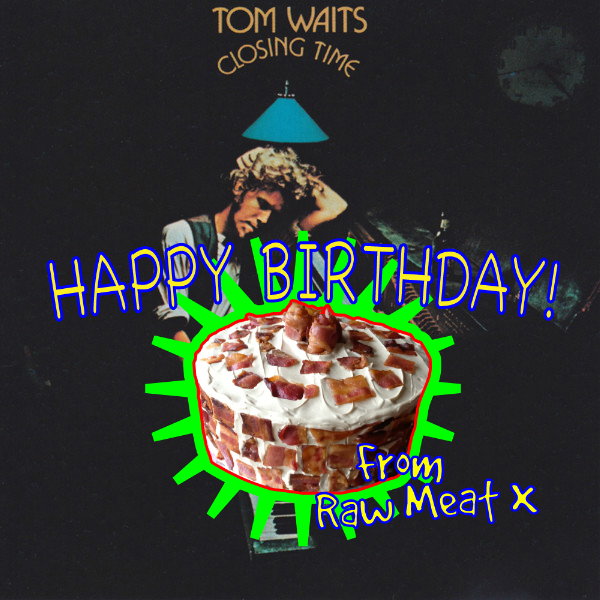 At Raw Meat we like to celebrate an important records’ birthday by reviewing it. Happy 45th birthday Closing Time, originally released 06/03/1973 on Asylum Records.

Long before he became the gravelly voiced, glitter throwing, earth shattering eccentric that confessed to “stirring brandy with a rusty nail”, Tom Waits was a vulnerable, shy twenty-something, attempting to find his place in Southern California. Refusing to be associated with any club that would welcome him as a member, he headed north from San Diego to LA. Bizarrely, in the same distance as from London to Nottingham, Waits created a persona that left behind his folk-singer, Dylan-wannabe days and arrived somewhere between Charlie Chaplin and Charles Bukowski. And the beatnik era of Tom Waits' ever evolving career was born.

Still without a record deal, Waits frequented LA’s Troubadour. In early 1972, at 23, Waits was performing the yet to be recorded (for Closing Time) ‘Grapefruit Moon’ when a young David Geffen was “floored” by the song... as he was queuing for the toilet. Waits signed with Geffen’s newly created Asylum Records, with whom he stayed with until 1980’s Heartattack and Vine (another essential record).

Prior to Geffen’s involvement, Waits had never performed onstage with other musicians, let alone been inside a recording studio. But his material had been honed onstage for a long time (along with his patter) and with the strict order to hire an upright bass player for the sessions, Closing Time was recorded at Sunset Sound Studios, following in the footsteps of Buffalo Springfield and The Doors.

Some cite the following years’ The Heart of Saturday Night as Closing Time’s bastard twin in the Waits family album of albums, but even by 1974 he’d already shed his skin to a far jazzier, assertive, seedy and sexually alluring scale. Borrowing the title from his hero Jack Kerouac, he’d be lingering in all night diners and dive bars, jotting down fragments of eavesdropped conversations in the twilight hours that'd trickle into his own writing, in an attempt to capture the underbelly of LA nightlife.

The most endearing aspect of Closing Time is that it is, in hindsight, an anomaly in Waits’ now illustrious back catalogue; ranging from soundtrack to communist propaganda video (see ‘Russian Dance’ from 1993’s The Black Rider), to the love song of all love songs (see ‘Picture in a Frame’ from 1999’s Mule Variations). A vocal admirer of Dylan and Randy Newman (the latter surely in mind when writing ‘Lonely’ and ‘Rosie’) around this time, it’s the deepest into the ‘singer-songwriter’ format that Waits ever delved.

Everything about Closing Time is right on the nickel in terms of the production and arrangement for these down-hearted tales of love, heartbreak, late nights-cum-early mornings and smoke filled pool halls. Similarly apt is the image of Waits, dimly lit, cornered in some smoky watering hole, surrounded by booze, cigarettes, a piano and the promise of a hangover.

Closing Time suggests that when Frank Sinatra walked in the bar in ‘One For My Baby’ at “quarter to three” saying, “set ‘em up Joe, I’ve got a little story I think you should know”, that he was mistaken thinking there was “no one in the place”. Tom Waits was slouched in a nearby booth, scribbling notes.

‘Ol’ 55’s’ gentle piano chords glide along and set the tone of the record. It’s soft yet fierce, regretful but hopeful and tells the tale of driving home in the "wee small hours" from his girl's place, disregarding the fact he’s holding up the “freeway, cars and trucks” and “just wishing I’d stayed a little longer”. Arguably the song is a suggestion of escapism and a clear sign of his ability to create characters as a vessel to tell semi-biographical stories, akin to his counterpart Bruce Springsteen who released his debut Greetings from Asbury Park the same year, to a similarly muted reception both critically and publicly.

The obvious indication that Tom Waits was in a league of his own already, is his ability to set a scene and convincingly convey a story. On ‘I Hope That I Don’t Fall In Love With You’ he puts a voice to anyone who’s ever instantly fallen for someone (whilst drunk in a bar) and played over possible scenarios for an introduction, only to stick rather than twist and just “have another round”. In a similar vein to the opening two cuts is the country-waltz of ‘Old Shoes (& Picture Postcards)’ where it’s “goodbye, so long” to another love affair.

Arguably the highlight is the devastatingly candid ‘Martha’. A tale of a man reminiscing forty years later about ‘the one that got away’ and attempting to reach out to her to “meet him out for coffee and we’ll talk about it all”. Such a mature song, sung by someone who wasn’t yet 25. Testament to this, the enigmatic Tim Buckley actually included a version of ‘Martha’ on his penultimate album Sefronia, as did the cult icon Lee Hazlewood. The conviction in Waits’ quivering voice as he concludes “I remember quiet evenings, trembling close to you” would only fail to bring a tear to eye of a heartless bastard.

The appropriately named eponymous track, whilst instrumental, signs off amidst a last orders murmur of trumpet, strings and lovelorn piano; at home in Francis Ford Coppola’s Once Upon a Time in America (in any of the scenes that show us how good-a-bunch-of-bloody-mates De Niro and company are). Whilst Waits would never fully return to the country-esque ballad form of song writing, Closing Time is a remarkable example of a young man tentatively flexing his newly required creative muscles – an exceptional debut from modern music's, arguably most illusive and revered troubadour.