Gender equality and awesome bands. See you there. 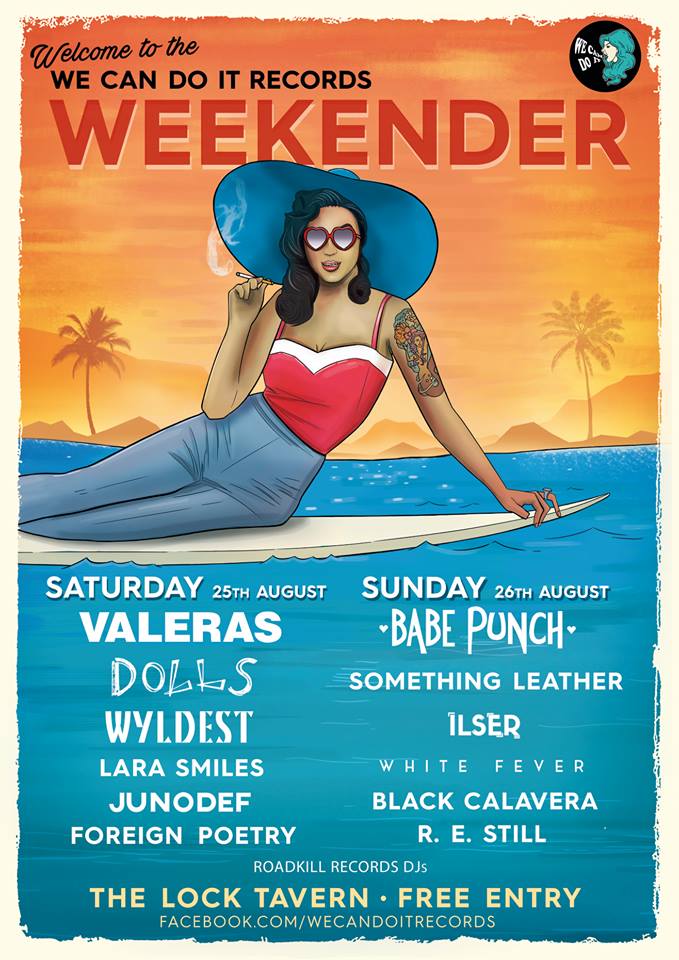 Gender equality and awesome bands. See you there.

Losing the Lock Tavern will be a huge blow to the Camden (and London) music scene. There's no arguing that. But what better way to send off a dying legend than to celebrate with the new school of riffs and hits.

We Can Do It Records live up to their name in female-skewing equal representation (is that an oxymoron?) Proving time and time again that the days of all white, all male lineups are dead and buried at poorly attended, stereotype-riddled ceremonies. At Raw Meat we hold their values (and impeccable taste) near and dear to our hearts, which is why we're beyond excited about their XXL Summer Weekender.

So let's get down to it. Set across both Saturday and Sunday this weekend will be full of highlights. Whether that's the honey-dulcet, ethereal tones of Foreign Poetry, as they weave together zydeco and indie; or the harrowing post-rock of Junodef's skulking riffs and looming vocals.

As we move through the line-up, the riffs leap further to the forefront, especially in the form of Lara Smiles. A guitar-driven dance band living somewhere between The Gossip and Franz Ferdinand, if her performance at The Great Escape is anything to go on this show will be an absolute joy.

And as the day flips into melody-driven pop territory, Wyldest will churn Cyndi Lauper vibes through Space Echoes and early Madonna shuffles into lilting feather-light riffs. Before the distortion kicks in, and DOLLS tear through the air. Their new EP looms in the distance, and wrangles their gothic tendencies into Cramps-esque rock n roll. The duo are addictive to watch and totally additive-(read as 'bull shit')-free.

When it comes to Saturday's headliners, we're a little lost for words. Valeras' wall of guitars and snaking melodies stole our hearts the first moment we heard them. While a huge amount of that dumbfounded admiration is down to the lead vocalist/bassist Rose and her completely relentless groove and unnerving stare; the songwriting beneath the band's staggering performance is timeless. Watch out for this lot, they won't be silenced.

Sunday will open with the un-Google-able R. E. Still, of whom we only have a photo to pique your curiosity, before we descend into the lilting, damned carousel of Black Calavera. Their Shadows guitar lines wind around Grace Slick-ian vocals, conjuring thunder in the distance.

Keeping it creepy, White Fever are masters of the spaces in between the notes and the power of a whispered melody. Almost on the opposite end of the scale, ISLER slither around a well of rattling overdrive and spaced out reverb, feeling like they're ready to explode at any second. And when they do erupt into Pearl Jam choruses, it's powerful stuff.

As we draw well into the depths of Sunday evening, Something Leather will bring melodrama and stomping riffs to the stage, combining the inherent darkness of their songwriting with the kind of bass grooves you'll feel in the pit of your stomach for days.

That is of course, until Babe Punch wrap the whole occasion up into a nice little package. The most unpleasant thing about this band is choosing which track to share with you to get the point across. They're a jagged bolt of energy, with riot grrl riffs, Ramones bpms and an angrier PJ Harvey upfront. There's nothing we don't like.

It's hard to believe that, if you're reading this, there isn't at least one artist that tickles your fancy on this incredible bill. And once again, we've got to extend our support to We Can Do It (now also a record label). They even released their first zine recently, full of all the stuff we're pretty confident you like.

See you at the bar.