Y Not Festival turned ten this year and we, Snoop Dogg and Basement Jaxx were invited along to the party. 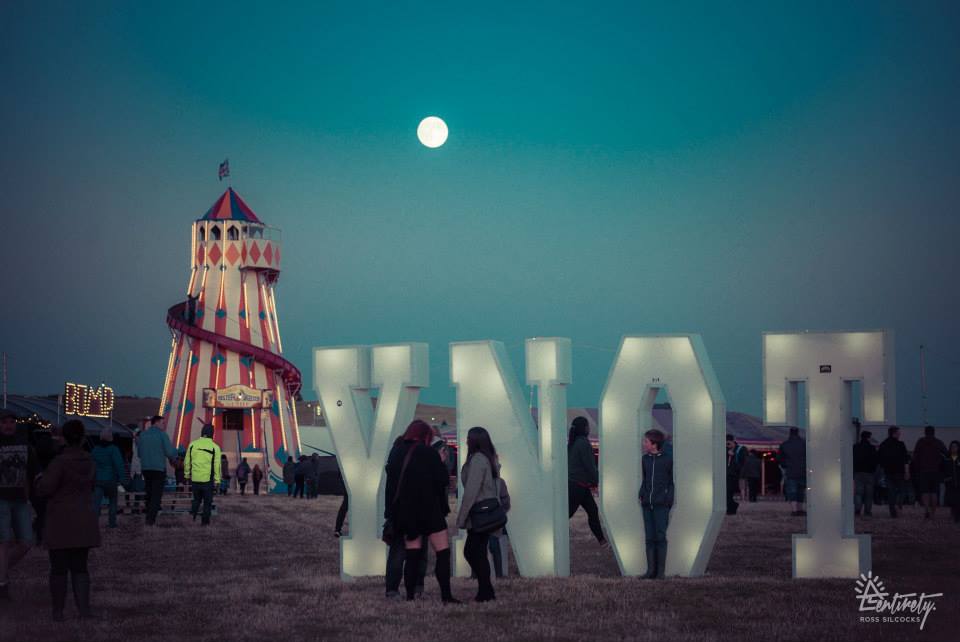 Y Not Festival turned ten this year and we, Snoop Dogg and Basement Jaxx were invited along to the party.

On paper, Y Not Festival’s line up looks ridiculous. What festival would dare to put Snoop Dogg, Pulled Apart By Horses and Less Than Jake on the same line up, on the same day, at the exact same time? Y Not would. Because well, why not? (sorry). So, for such an intriguing line up, we put on our muddy boots and packed lots of whiskey for a fun-filled weekend in the hills of Derbyshire.

Since we set our eyes on JOHN last September at Southsea, we’ve been hooked. Their gnarly riffs and ferocious vocals are as addictive as the band are loveable and we couldn’t wait to see them at Y Not. First up at half 12 at the Giant Squid, the duo from London are a slightly rude awakening for the campsite, but that doesn’t stop them from unleashing their animalistic noise. The unrelenting drumming combined with dirty riffs makes for a very powerful combo on record, and an even better one live. When physically watching this band, the appreciation of the attention to detail that goes into every riff increases tenfold as Johnny Healey’s interesting guitar techniques engross. Regardless of the glitches, unfortunately, as a result of being the first band on, JOHN pull in a crowd that remain captivated and convinced that this band were more than worthy of their attention.

“We’re called The Spills and we’re from Wakefield” announced the next band on at the Giant Squid. Following JOHN, The Spills are faced with no glitches, but nowhere near a big enough crowd. Their instrumental math-rock breakdowns alongside the singer’s fluctuating vocals sound heavenly even when reduced to single notes. Flowing through their half hour slot, The Spills showcase the best of nostalgic and compassionate rock music.

‘Interesting’, ‘unique’ and ‘exciting’ are adjectives you see a lot when describing breaking bands, but these words don’t come close enough to describe the wonders of Axes. Just watching two songs is enough to satisfy an insatiable appetite for good music. Axes prowl around stage as if they own the place, playing their intelligent alternative rock to a crowd that all seem to be aware of the genius of the band. Their intensity and complex rhythms make up for the total lack of vocals and leave you questioning why you feel the need to know the words to a band’s song to enjoy a live show.

Slaves are that band that have been all over the festival circuit, putting on show-stopping performances that people would be mad to miss. Y Not Festival seem to be the only festival that has predicted their glorious rise to fame this year, being the only small festival to put them on a stage that can actually cope with the number of people that want to see them. Slaves more than deserve this main stage slot, but the sound and the lad culture that seems to come with their performances is making their sets a disappointment. Following Slaves at a lot of their gigs this year, the sound has always been a problem – the drums have either drowned out the guitars or vice versa. In smaller venues where the atmosphere is toxic, it’s forgivable – outside in a big field amidst the hills, however, it is not. The only way to battle bad sound is by throwing yourself around in a pit, but even that was swarmed with people who had no idea what they were doing. Luckily for Slaves, their charm and crowd interaction is a saviour for a set that could’ve been the most disappointing set at Y Not this year.

Sheffield four-piece, Best Friends, are the next surprise at the festival – but for good reason. The Giant Squid Stage is best known for hosting the rock/ punk/ metal bands of the festival, but at half five, a surf rock band take over the stage. Dressed like surfers, their music emulates everything they are on stage; fresh, groovy and on-trend.

Reluctantly moving away from the Giant Squid, it was time for a swift walk back to the tent for whiskey o’clock before heading back to catch the wonderful Scottish lads, The Xcerts. After seeing these boys play a very heartfelt and humbling show at the main stage at 2000 Trees, it’s a shame to see such a poor turnout for them at Y Not. That doesn’t stop them from belting out their infectious pop-rock melodies with big smiles on their faces though.

Now comes the ultimate decision; Pulled Apart By Horses or Snoop Dogg. With the whole idea of Snoop Dogg being in a field in Derby, it’s a pretty quick decision to make, but after waiting an extra ten minutes (not long, we know) for the rapper to appear on stage and watching several people get drugged up on MD in order to enjoy the legend himself, it’s time to head to catch the riff-lords, Pulled Apart By Horses. It’s a well-known fact by now that Pulled Apart By Horses are an insane live band, and there’s no doubt that if Snoop Dogg was not playing the main stage, the Giant Squid would be rammed. But despite the smaller crowd, the Leeds rockers manage to instill the same crazy reaction had there been hundreds more people present. Bumbling around in the pit for old favourite, ‘Moonlit Talons’, were the lovely JOHN, Tom Hudson’s (vox and guitars) dad and brother, and the lead singer of Max Raptor. Pulled Apart By Horses always put on a blinding performance and play every show as if it was there last. This performance marks no exception. From their exciting records and unforgettable live performances; Pulled Apart By Horses have got everything.

Time to re-fuel on alcohol and almonds and head to the after-party at the Quarry. The Quarry Stage was turned into a house DJ’s dream, pummelling out music that sounds like the same song stuck on repeat. After twenty minutes, it begins to get tedious so a venture to anywhere else seems like a good idea… until there’s a realisation that every other tent sounds the same and the only one remotely different is the silent disco where there’s a big-ass queue in the freezing cold. But saying that, the festival afterlife was much more exciting than some of the other festivals on the similar-sized circuit and the silent disco, from the shouts of those involved, seems like it would’ve been a bundle of laughs. We decided to hit the hay and prepare ourselves for the next day at Y Not Festival.