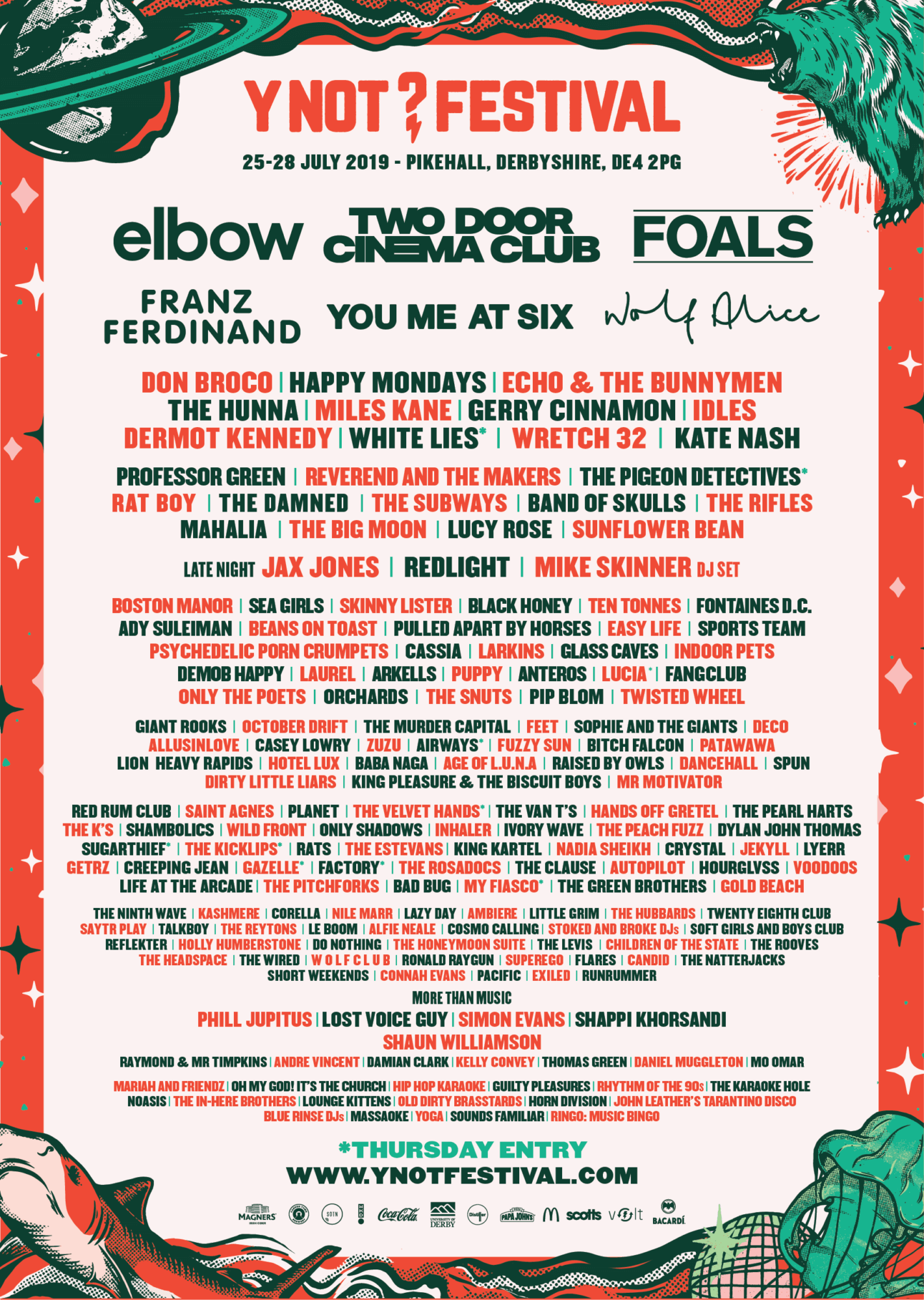 Y-Not Festival is set in the usually beautiful Derbyshire Dales. This relatively small festival holds around 20,000 and is the younger sibling to Truck Festival, which is held over the same weekend with a similar alternating line up. Y Not is packing a punch this year with a guitar-heavy line up and some big names headlining.

We rocked up fashionably late on Saturday morning, opened a can, put the tent up in record time and got straight down to the front to see Mr Motivator opening the main stage, obviously. If 10,000 people dancing and exercising in the rain isn’t the perfect start to a Saturday then what is? A bunch of lads on a stag stole the show, dressed in matching Mr-M lycra, they were quickly spotted by the eagle-eyed stage crew and were beckoned on to the main stage to stretch their hamstrings with the man himself to rapturous cheers. 10/10 so far.

Not going to lie, it was absolutely pissing it down and it pretty much didn't stop until we left (more on that later). Across the site there was a sea of cagoules and McDonald franchise ponchos (yes there was a McDonalds on site - capitalism at its peak). There were plenty of places to stay warm and dry, including the Giant Squid stage, where we rocked up to catch early risers, FLARES. They literally bounced onto the stage as if they were headlining, and performed an array of pop songs that, while a little raw, had everyone equally bouncy.

The BBC Introducing stage is always a good place to find some new music and The Honeymoon Suite are definitely making a statement of intent, filling their early slot with racy, post-punk, pop. Frontman William Rhodes has that thing you need to be a frontman; his piercing stare captivates the slightly damp audience. Bass player, George Wright, is proudly showing his local colours wearing a Derby shirt and gets the award for moustache of the weekend as the Nottingham/ Derby-based band fly through a very entertaining and energetic set. Definitely ones to watch.

Idles. What’s to say? The crowd are chanting their songs while they sound check their own instruments, no privilege here. This band are a movement. That much is clear by the throngs of people who turn up to their early set (this will be the third of four festivals the group play in two days). “Long live immigration and long live the EU,” snarls Joe Talbot before the band tear into 'Danny Nedelko', and it’s all this crowd needs to go absolutely crazy. Fresh from their Mercury Prize nomination, not that you’d know it, in ponchos like the rest of us the band smash through a set of festival-ready anthems, 'Heal/Heel', 'Never Fight a Man With a Perm', 'Samaritans' and '1049 Gotho' are all just perfect. It feels like a real privilege to be watching them. Absolutely brilliant.

The Big Moon look very comfortable on the main stage, despite the smaller crowd due mainly to the absolute non-stop sideways rain. The four piece are back after a decent hiatus as they recorded the follow up to their excellent debut Love in the 4th Dimension, and the question is – will there be bangers? Of course there will. They debut a couple of tracks, (including new single, 'It’s Easy Then'), that are promising indications that their next record could see them propelled to full-blown stardom. They even have time to announce a marriage proposal from someone in the crowd before they play 'Cupid'. Congratulations Chris, whoever you are.

Pip Blom draw a sizeable crowd to their set in The Quarry. The four piece, signed to Heavenly Recordings, bring a certain swagger to the day and their lo-fi slacker pop even brings the sun out for a few minutes. Their recent single 'Tired' gets a warm welcome, no doubt thanks to the blanket radio coverage it’s received over the last month.

We happen across Feet on the Giant Squid stage who are what Fat White Family would be like if they weren’t on crack. A psychedelic mishmash of pop and jangly guitars with lyrics like, “It’s the English weather / you better pack an umbrella” feeling spot on for this weekend. They have a Happy Monday’s baggy vibe and we like them. A lot.

We head over the Allotment stage, sponsored by This Feeling, where it seems that every Soccer AM anthem band are playing this weekend. Rats (what a horrible name) are doing the best impression of The Enemy, singing about football and knife crime in one song. We quickly move on.

Nottingham’s Babe Punch are playing around the back of the bike sheds of the festival, off the beaten track, which is exactly where you’d expect this mischievous four piece to be. They play the rrriot girl punk that gives absolutely no f*cks for your music taste. They are in your face, anti-establishment punk. They even cover ABBA’s 'SOS' and it’s the noisiest version of this song that you’ll ever hear. Ramshackle and ace.

Last minute additions to the line-up are Slow Readers Club who set the night off with their atmospheric rock. They’ve grown their fan base slowly but surely, and judging by the numbers of arms in the air there’s plenty of “readers” here delighted to see them. A band that is destined for bigger slots than this for sure, the Manchester gang have got that Stone Roses adoration from their fans who love an anthem.

Two Door Cinema Club are headlining the main stage so we do the right thing and watch The Damned. Will the punk veterans deliver? By this point, we’re wet, cold and tired so they'd better. They’re antagonistically 15 minutes late, “We’re The Damned, better late than never!” proclaims lead vocalist Dave Vanian before smashing through classic after classic. 'Love Songs', 'Machine Gun Etiquette' and 'I Just Can’t Be Happy Today' are the perfect antidote to Two Bore. The Damned are loud, proud and in your face. They even get a little political, dedicating 'Ignite' to Boris Johnson.

As we return to our tent, the treacherous weather wins. Turns out that if you do not put the roof on your tent properly, it floods. The next morning, it looks like most of the festival goers are departing after a night of non-stop rain that's turned the place into a mudslide. There are some hard-core people that stay to see another cracking day including Foals, Wolf Alice and The Murder Capital but, unfortunately for us, it’s a quick drive back to Nottingham to get dry. For the brief moment we were with you Y-Not, it was a real blast.