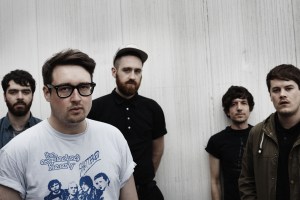 It's the first taste of their red hot second album The Hum (out 10.11.14 on Weird World) and it tastes good.

Hookworms' debut record, Pearl Mystic hit the top of several of 2013's Album of The Year lists (or near enough), so it's no surprise that 'On Leaving' has drawn its fair share of attention. With a powerful and more formulated sound, the band have hit a stride. They sound like ideas are getting fully developed (like six minutes developed), while remaining un-restricted. If Pearl Mystic was a learning curve, or a confidence boost, 'On Leaving' feels like the evidence of a lesson learnt.

Guitarist, SS says, “We were writing Pearl Mystic to an audience in the same way your diary has an audience. It’s written to one but if no one ever reads it that’s not a big deal. This time round though we knew we had a really clear audience, so The Hum is really about different freedoms and constraints – with Pearl Mystic the possibilities were almost too vast, this time around we had a much clearer idea of what the record should be like and that became freeing because we didn’t need to worry about its direction so much.”

I'll bet you'll hear material from Pearl Mystic and The Hum at any of the below UK tour dates: