A Laughing Death in Meatspace could be the soundtrack to your anxiety – mangled nursery rhymes for the year 2018. 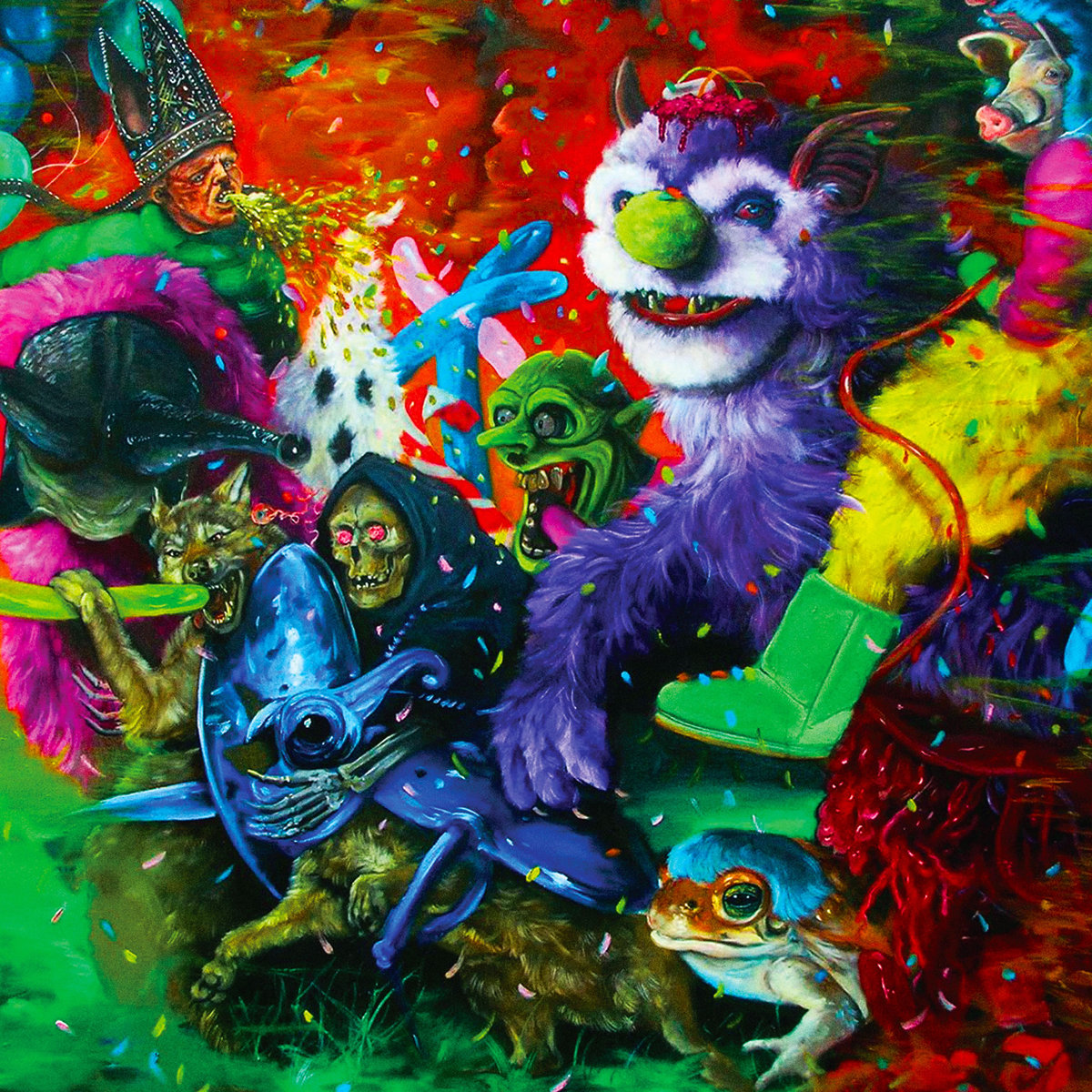 A Laughing Death in Meatspace could be the soundtrack to your anxiety – mangled nursery rhymes for the year 2018.

For months, Tropical Fuck Storm have teased fans with an acerbic drip-feed of 7” singles, cover tracks and unhinged music videos, culminating in their recently released debut album A Laughing Death in Meatspace. TFS is a phoenix of sorts; rising from the ashes of The Drones to form a supergroup consisting of Gareth Liddiard (The Drones), Fiona Kitschin (The Drones), Erica Dunn (Mod Con, Harmony) and Lauren Hammel (High Tension).

A Laughing Death in Meatspace works as a palimpsest of the discordant hellscapes carved out by successive Drones albums, but TFS is hardly The Drones 2.0; more a suitably waspish spin-off, a grisly and groovy evolution that will surely upset right-wing bottom feeders like Andrew Bolt, again.

'You Let My Tyres Down'

A Laughing Death in Meatspace opens with a crackling and miasmic excursion into the haunted spaces between palatial shopping centres and the palatial residence of the rich. 'You Let My Tyres Down' releases the dogs with bees in their mouth and when they bark they shoot bees at you in a Mr Burns-esque whipping of economic inequality. The song punches out of the wasteland as Liddiard yelps and spits irreverent lyrics capturing the violence all along the edge of the class divide.

This track is a nursery rhyme, hacked. 'Antimatter Animals' draws on nursery rhyme sensibilities: nihilism, the slow gruesome peaks and troughs of civilisation thinly veiled by dead-eyed cuteness/deranged pop melodies, misanthropy. It reads like the spiritual disfigurement of 'A Ring around the Rosie', appropriated and cosmically aberrated to echo in the year 2018. An all-consuming bass replete with distant droopy honks of dischord collapses into shreds and shrieks of backward notes. Antimatter Animals carries sparse singing across a glitchy soundscape before exiting in a beautifully foul-mouthed choir of, “Your politics ain’t nothing but a fond fuck you”. A-tishoo, a-tishoo, we all fall down (winky-face emoji).

I like to think of 'Chameleon Paint' as the song sequel to The Drone’s track, 'The Minotaur', which appeared on the 2008 album Havilah. This track even features The Drones and is a spectacular astral projection of Havilah-era guitar tones and themes. Where Liddiard left 'The Minotaur' ten years ago at the lyric, “intermission comes …  along with all our faults and memes and it says / Veni Vidi Vici”, Tropical Fuck Storm answers back in 2018 with, “these are only my impressions / all of which are false”. Ooft. The spine shivers.

'The Future Of History'

'Two Afternoons' gallops across the centre of the album like the ghost of a headless horsemen taking a selfie while riding in the direction of a beach party at the edge of another dimension. In a way, 'Two Afternoons' is a modern reimagining of 'Zorba The Greek'. Tropical Fuck Storm (it is way too much fun typing that band name) reincarnates Zorba’s musings on religion, life, and being working class in a masterful sonic koan; boiling images of hope and escape.

Whomst’d thought the apocalypse could sound so groovy. 'Soft Power' could easily be the soundtrack to someone’s climate anxiety or fear of impending nuclear war. TFS don’t shy away from cataclysmic nihilism, whispering, “we’re all about to get royally fucked”. The title of the track echoes the tune’s catchcry; 'Soft Power' being a name for the insidious ways in which countries like the USA flex their economic and cultural muscle to “softly” float their imperialistic goals around the world. Whew, heavy stuff. 'Soft Power' blurs the line between present and post-apocalyptic states. The song finishes with a quiet goodbye to the characters of Happy Days and the scarecrow from The Wizard of Oz. This disturbing flash of jovial pop culture references while the world burns is reminisce of, “the fluid nature of violence and media” depicted in Childish Gambino’s 'This Is America'.

Kenneth Cook’s ‘Wake in Fright’ opens with the lyrics from an old Irish jig, “may you dream of the devil and wake in fright”. 'Shellfish Toxin' could easily be the instrumental detailing of such an awakening. The track opens with seagulls and a fun fair in the distance before bubbling through an atmospheric dreamscape of lilting synth sounds and hungover guitar notes. There’s a hymnal quality to this track; think Twin Peaks theme meets St Kilda.

'A Laughing Death In Meatspace'

Lyrically, there is a hell of a lot going on in this song. As is the trademark of other tracks on the album, A Laughing Death in Meatspace is a potluck of (pop) cultural references sewn into a pastiche embodying annihilation. A Laughing Death in Meatspace coalesces the portmanteau ‘meatspace’ (the world outside of the internet/computers) and ‘laughing death’ (a neurodegenerative disease transmitted by funerary cannibalism) to take aim at the technocracy - Elon Musk watch out, Tropical Fuck Storm is out for blood. This linking of concepts could also be read as a play on internet meme culture - the replication, appropriation, aberration, and dissemination of imagery across the cultural vortex of cyberspace works precisely like an untreated circulatory infection; a laughing virus. But there’s light at the end of this doom tunnel(/track). 'Meatspace' concludes with an optimistic key change, sanguine chants pouring from a silo of twisted riffs and night terrors.

The Meatspace grand finale is an eviscerating execution of late capitalism and the state’s attempts to quieten resistance. The title appears to be a play on the so-called ‘rubber bullets’ used to disperse riots and protests. 'Rubber Bullies' starts in a supermarket aisle - where the air conditioned air is too cold - before continuing the theme of ‘conditioning’ by riffing through a list-like barrage of consumeristic deathpits; alluding to the housing crisis in Australia as well as the morally vacuous vortex that is the relationship between landlords/developers/politics: truly a fuck storm if there ever was one. A Laughing Death in Meatspace ends not with a bang but with Liddiard quietly whimpering, “where we going now?”

I don’t know, Gareth. I don’t know. But we’re looking forward to another Tropical Fuck Storm in the offing.

Tropical Fuck Storm drip-fed singles in the form of 7” singles in the months preceding the release of A Laughing Death in Meatspace. A cool thing to do with each 7” containing a B-side cover of “songs we love and wish we had written”. The Rubber Bullies 7” is accompanied by a Fuck Storm-style cover of the Bee Gees' 'Stayin’ Alive'. With tongues firmly in cheeks, 'Stayin’ Alive' works as a cheeky reflection of the internet’s world wide wreckage depicted in 'Rubber Bullies' as the embattled narrator of 'Stayin’ Alive' struggles to find purpose in a world constantly tasered by a digital stream of moral pollution. So hectic.