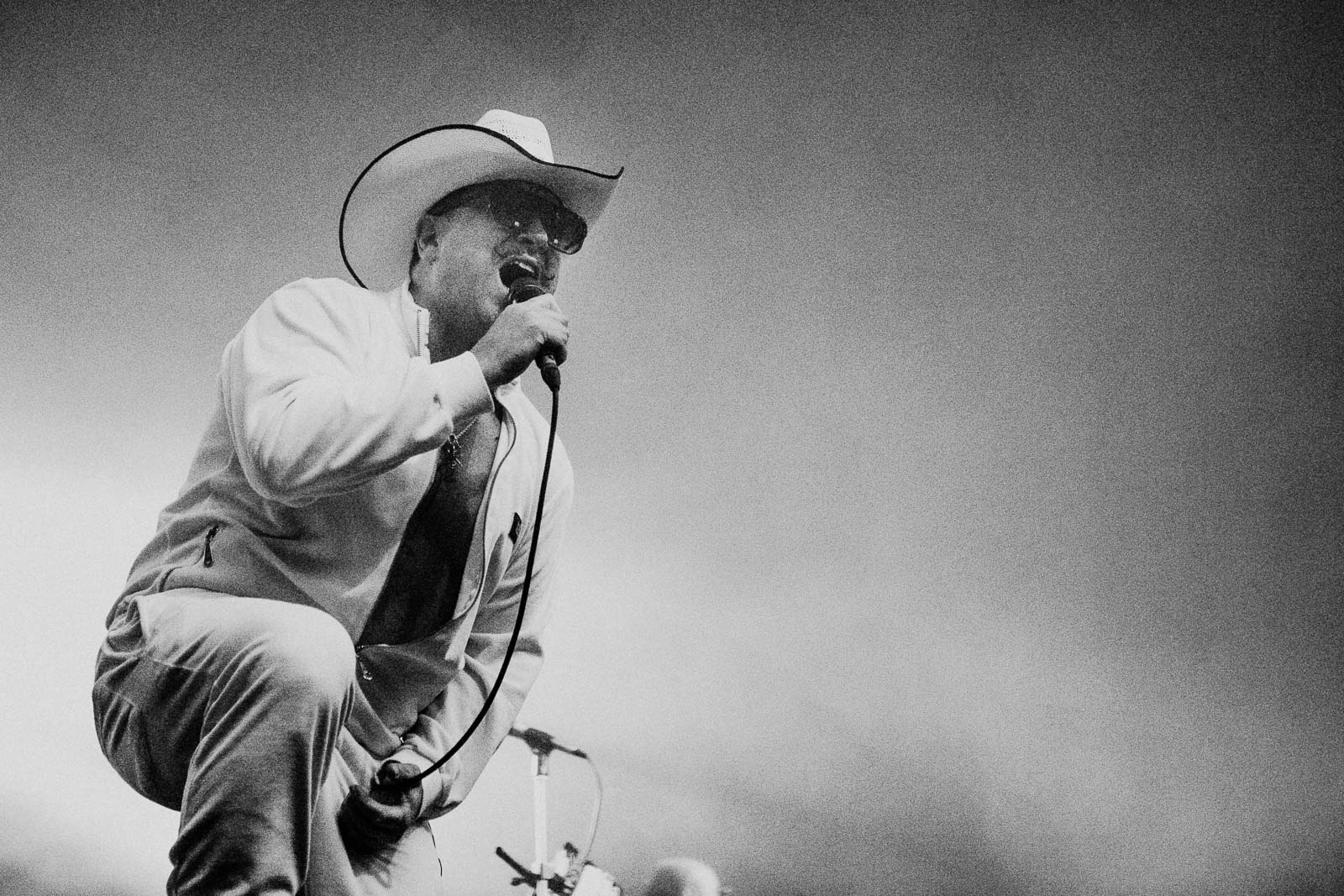 It’s Saturday afternoon and I’m eagerly awaiting our glorious leader to announce the newest chapter of the saga, the birth of tier four. For now all I can do is sit and lose myself in nostalgia. A full seven days ago the world was a different place, Londoners were living it up in tier two, enjoying beer soaked scotch eggs and attending all the car-key parties they could stomach. In those heady days live music was rife, it was nearly impossible to navigate the week with the bounty on offer. So many choices. On Saturday the 12th December I chose to make my way to Warmduscher’s first set of the evening at EartH (Evolutionary Arts Hackney).

The evening began in the most standard of ways, out on the street necking the last few cans of Polish lager as the set time inevitably creeps up on you, then the mad rush to get into the venue before it starts. The shows I have attended before at EartH have always been in the main venue, so I’m a little surprised to be directed around a small assault course of barriers and super friendly staff, with a welcome halfway rest point at the downstairs bar, upstairs to the theatre. There’s a good reason everyone is so friendly. This is the first show here since all this stuff happened and everyone is clearly excited to be back. The upstairs is just as big as downstairs and surprisingly beautiful. A massive Art Deco theatre with huge wooden steps for the audience to sit on, taped off into small sections for people to sit in their groups, with a great view of the stage even when seated. There’s a school assembly feel to it. We are told to wave for bar service and someone would bring us drinks. So far so good.

Warmduscher take to the stage and the game of ‘identify the members’ begins. One notable absentee is drummer, Lightnin’ Jack Everett. We had heard rumours ahead of the show, talk of arrests, debauchery and the black market. No official announcement was made, but word in the crowd was that he had become involved with a large-scale gambling syndicate in Vienna. Debts had been left unpaid and Jack was currently in hiding somewhere outside the city.

They are fronted as always by the track-suited, tashed and be-stetsoned figure of Clams Baker, fresh from overseeing the classiest of Vegas weddings. Beside him throughout is the stony figure of The Witherer aka Little Whiskers, dressed in a three-piece grey suit with dark glasses, some kind of electrical wizardry hidden in his clasped hands. It feels very much as if a sermon is about to begin. If I were to take a guess it would be that Baker would be the one instructing us to drink the Kool Aid and Whiskers would be the one enforcing it.

The band open with ‘Big Wilma’, which can only be described as a sludgy wall of noise. It’s been nearly a year since a live show here, perhaps the engineers are slightly rusty. "All right Ladies and Gentlemen, there’s a first time for everything. It’s going to be noisy, it’s going to be loud and it’s going to be messy. It is what it is," Baker tells us. In almost perfect response to the muddy sound conditions the band push forward with ‘The Salamander’, about as sleazy and sloppy a track as they can muster and perfectly fitting. The song gives the engineers time to make the tweaks needed to get things nicely on track.

By the time we get into ‘Midnight Dipper’ everyone is warmed up nicely, things are sounding good and the crowd are doing their best to get to their feet. Mr Saltfingers Lovecraft’s bassline is unavoidably infectious. All the disgusting tone of JJ Burnel and octaves straight from the Horace Panter book of basslines. Pockets of the audience pop up here and there to dance, the fun is well policed by the Earth staff. It’s easy to forget the bigger picture and get caught up in the madness, but everyone here is responsive to the venue’s efforts to keep the peace and more importantly, keep putting on shows.

For a band with only three albums to date the set is back to back bangers. We are treated to some new music along the way. The promise from Baker is "That’s another new one coming strong in 2021." A couple of catchy disco numbers, set to appear on the band’s upcoming fourth studio album.

The biggest hitter of the night comes in the form of their galloping rave number, ‘Disco Peanuts’. The band are joined on stage by Nuha Ruby Ra who lends her vocals to proceedings. By this point the crowd are fully on board and loving life. I’m full of admiration for the band’s energy in what must be a surreal experience for them. Gaining energy back from a seated audience is a task for such a visceral band, but they certainly manage it.

All images are by the incredible Anna Louise Yorke.