So, Arcade Fire have done a U2… but to say they pull it off is the biggest understatement of 2018. 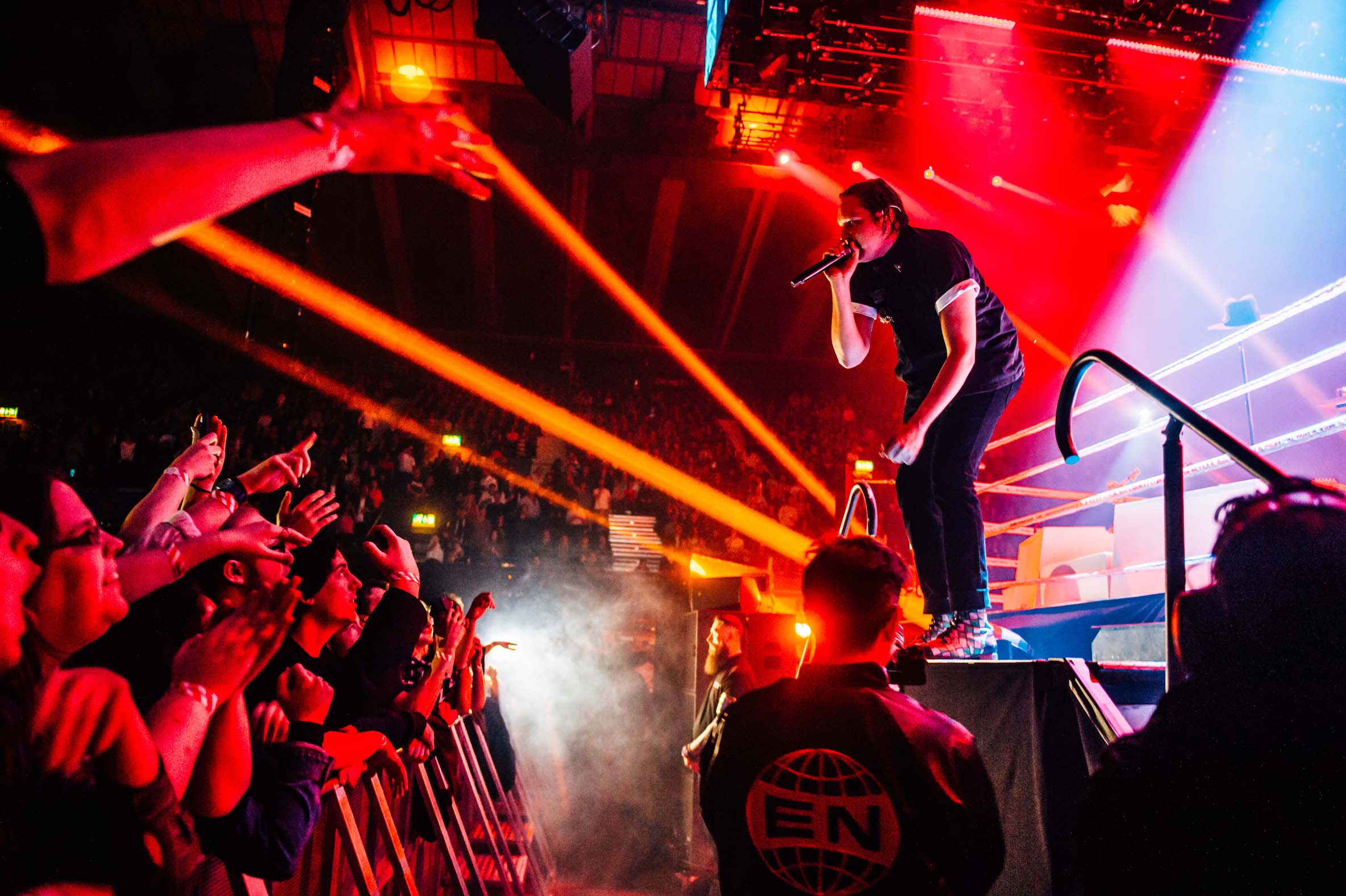 So, Arcade Fire have done a U2… but to say they pull it off is the biggest understatement of 2018.

Don’t worry, they haven’t released their own i-Pod, the tour isn't sponsored by Blackberry, etc. Last night in an at-capacity Wembley Arena, the Montrealians confidently snatched the rock show rule book, tore it up and re-wrote it in front of 12,000 people. Re-affirming themselves as one of music’s supreme live acts and confidently laying down the benchmark to which their peers are to aspire.

The comparisons to the Irish quartet is in reference to their grandiose live shows that’ve become their trademark since making relevant music is no longer in their repertoire. In particular, their 1992/3 Zoo TV Tour and 1997/8 Popmart Tour, notorious for illustrious set designs, ridiculously large screens, costume changes and a mechanical lemon that they’d emerge from (it was prone to breaking down, painfully similar to Derek Smalls in Spinal Tap as he gets trapped in his alien pod).

Arcade Fire’s approach to the Infinite Content Tour, and the recurring theme of their latest record Everything Now is modern day consumerism and a constant need for, well, everything… now. When interviewed by The Guardian last month, they responded to the criticism of the themes of the album being obvious by saying “Look at the moment we’re in. We’ve got a reality star in charge of the United States, and everything we love and care about is being filtered through this incredible corporate structure”. Even the merch stand tells the story (everything is littered with the EN logo), not to be mistaken for them having completely lost the plot. Personally, I find not trying to be overly cryptic with their message conveyed perfectly as it doesn’t overshadow the essential thing – the music.

As you enter the arena you’d be forgiven for thinking you’d come on the wrong night, as you’re greeted by (literally) a boxing ring in the middle of Wembley Arena, with four jumbo-trons hanging high above each side of the squared circle and flanked either side are huge mirror balls illuminating the faces of Londoners, not quite sure what they’re about to witness.

As Merry Clayton’s 1970 rendition of Canadian-native Neil Young’s ‘Southern Man’ fades out, the screens advertising products that, “can be yours for payments of $19.99 a month…” cut to the band, poised, backstage, Win Butler fists aloft and head bopping. A voice bellows throughout a la Mike “let’s get ready to rummmmble” Buffer, introducing Arcade Fire (with a combined weight of over 2000 lbs) as they are led through the crowd towards the ring. The overture to ‘Everything Now’ rings out and the atmosphere, before a note of music is played, is insane. Having never been to boxing match I can only imagine this is how events unfold at such gatherings.

Round one sees the band transition into the title track of their latest offering and rather than a left hook to the face, it’s closer to two welcoming hands caressing your cheeks and giving you a sloppy wet kiss of pure pop joy. Sonically, it is faultless, and remains this way through the two-hour performance (and it’s a performance in every sense of the word). No water or pep talk needed, round two erupts into the Funeral favourite ‘Rebellion (Lies)’. It’s obvious that this is a band at the top of their game right now, having reinvented themselves in this late seventies inspired stage show. The energy from the stage (everywhere you look there’s something happening) is inspiringly infectious.

Neon Bible’s ‘No Cars Go’ is dedicated to everyone who’s followed the band since their inception, acknowledging a show they played at the London ULU in 2005. The first surprise (in the set at least) of the evening, comes when Chrissie Hynde steps into the ring and the party really begins, performing a cover of Pretenders classic ‘Don’t Get Me Wrong’, with a giddy Butler and Hynde trading vocal duties.

‘My Body is a Cage’, the emphatic Ennio Morricone-like dirge brings some welcome respite to the danced-out legs, before they enter a trio of cuts from The Suburbs. This prompts a mass singalong during the title track, and is concluded with Regine Chassagne taking over lead vocal duties emphatically on ‘Sprawl II’ and disappearing into the crowd to dance with the locals. Audience interaction was a recurrence throughout, the band displaying a mentality of the fans being the key ingredient to what they’re attempting here, with the escapism of a gig just as much for the band as for the fans.

Ignoring the trio in front updating their Instagram story and even maintaining a text conversation throughout the show, the music, the band, the performance, the spectacle – is perfection.

The knock-out punch arrives with the encore, ‘Wake Up’, sickeningly, fourteen years old now. Support band the Preservation Hall Jazz Band, Chrissie Hynde and Bryce Dessner of The National all join the band onstage for the finale before forming their own conga line as they slowly play their way out of the arena through the mesmerised standing area. It’s a beautiful touch, the unification, and doesn’t go unnoticed as thousands pour out of Wembley still screaming the refrain at the top of their lungs.

Simply put, it’s the most fun I’ve had in North London with my clothes on.