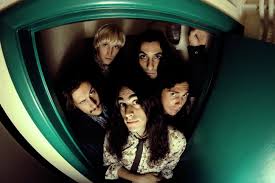 I read this week that Kasabian are worried that rock n roll is dying. Well it's been raining so hard for the last few hours that it might be drowning, but despite the resultant small crowd tonight's trio of next generation bands aren't letting it go down quietly.

Next up, Pearl Harts channel Sabbath and Zeppelin in different ways, with some earlier blues and other seventies influences also apparent. Kirsty's bluesy vocals have a raw edge and she rocks an old Gibson SG for authentic tone, but live use of a loop pedal, additional vocals and drum loops from Sarah keep the music from being a total retro blues-fest.

Check out the video for current single 'Black Blood' for a taster of their live sound:

Now I'm thinking the future of rock n roll has been slimmed down to power duos with loop machines, but the endearingly chaotic Bad for Lazarus stride on stage to remind me that even today 5 people with a common musical goal can still find each other and form a rock n roll band. Well in Brighton they can at least.

Rich Fownes' guitar sports holes and gaffa tape galore, as testament to the energy they put into every performance. Tonight the small stage and exuberant presentation combine to ensure a lead is pulled out, providing a deafening silence at an inopportune moment, but BFL are no strangers to the odd technical hitch and are back into the flow in seconds; energy and enthusiasm undiminished.

They have always been eclectic in their influences and somewhere in the mix tonight The Mighty Boosh meld with stadium rock and The Kinks, while Tom Waits invades on vocals.. It's the Bad for Lazarus sound, and it's one of a kind. Guitar and keyboard hooks, and shouted/ chanted choruses come thick and fast, interspersed with minor collisions on stage. The set comes to a close all too soon.

Someone (maybe a superstar band that worries rock n roll is dying?) should give this band some Marshall stacks and put them on a stage big enough to run around on without the risk of concussing each other.

Did I get soaked on the way to the venue? Yes.

Was it worth it? Yes.

Would I make an effort to see all the bands again? Yes.