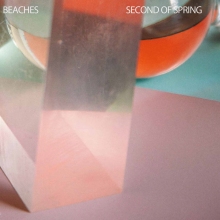 rating
Get Second of Spring

The Aussie four-piece prove themselves to still be a force to be reckoned with on this mega seventeen track double LP. Riddled with spectacular hooks, elegant harmonies and wavy distortion, Second Of Spring is a showcase for Beaches’ array of talents.

Deceivingly steady opener ‘Turning’ is swiftly followed by an extravaganza of vibrance. With an accompanying video released in July this year, multi-dimensional track ‘Void’ comes second. Its rippling texture and substantial bass foundations are an instant reminder of just what Beaches are capable of. Next up comes ‘September’, fast-paced and shoegaze-tinged, complete with a brilliantly sharp finale.

Much later in the record comes ‘Golden’, an enchanting mixture between Beaches’ angelic vocals and menacing string work. ‘Be’ is also notable for its stunning guitars, which take it in turns to come to the forefront of the track with the girls’ powerful voices.

‘Arrow’ and ‘When You’re Gone’ exhibit the bouncier, more easy-listening side to the usual psych powerhouse, balancing upbeat riffs and gentle vocals. They could almost be a different band entirely to the prior reverberating instrumental ‘Divers’, no doubt capturing the interest of their avid listeners. Standout track ‘Calendar’ is superbly thoughtful, balancing delicate, echoing harmonies with mature string-based accompaniment.

Second Of Spring is an album for patient listeners; seventeen tracks averaging at around four minutes each is no mean feat, particularly when the nature of Beaches’ style is to begin a track more toned down and then vamp it up towards the end. Nevertheless, this record sees Beaches prove themselves to be deserved of their critical acclamation and longevity. With the record being Chapter Music’s first ever double LP released by a single artist, the ladies have set their own impressive standard.