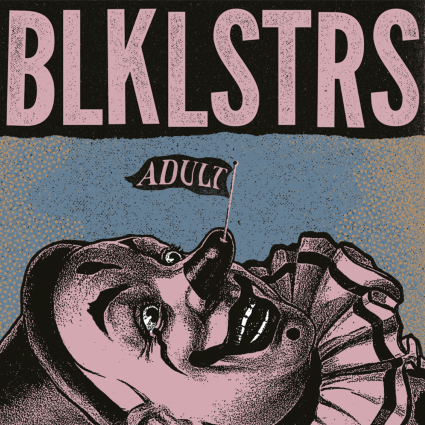 rating
Get The Vinyl

If someone asked what Leeds sounded like, Blacklisters would be the answer. The northern quartet encompass the Leeds noise punk sound perfectly and amplify it into something quite phenomenal. Blacklisters’ second album, Adult, is full of dirty, distorted riffs, animalistic growls and head-banging breakdowns that are enough to get anyone excited about hard-core rock again. With nods of approval from Future of the Left and Biffy Clyro, it becomes clear pretty quick who Blacklisters are for – and they’re not for the faint hearted.

Kicking straight into the sludgy grunge that’s somewhat lacking in the today’s scene, Blacklisters begin a wave of gutsy rock that never repents. The thrashing drums, fuzzy guitars and tormented vocals of ‘Cash Cow’ gives Blacklisters the grit and substance of grunge legends, Nirvana, but with significantly less catchy choruses. Continuing the 90’s hardcore grunge sound; slow-rolling, bass-driven track, ‘Big Ticker’, makes a filthy bed for Billy Mason Wood’s scratching vocals, before unleashing a mind-melting breakdown that’s sure to be a stomper live. Arguably the heaviest track on the album, ‘I Knock Myself Out’ is a perfect example of what Pissed Jeans would sound like if they gave less of a shit than they already did.

Ignoring the predictable riff-to-chorus-to- riff-to-breakdown formula; Blacklisters change the game with fifth track ‘Weasel Bastard’.  Building the tension with a simple ticking on the drums before launching into an almighty riff in the final 30 seconds of the song, shows just how well the guys in Blacklisters can manipulate their sound into something of an art-form. On the surface of this record, it sounds like a whirlwind of violent noise and shouts that seems to have no sense of direction, but digging deeper; the complex riffs combined with the brain-crushing drums are an intelligent work of art, dying to be appreciated. ‘Dreamboat’ sees the band focus entirely on the music as the vocals become something of background noise, allowing the instruments to become centre of attention as Dan Beesley shreds his guitar and Alistair Stobbart pummels his drums.