Leeds band Brawlers release their debut Romantic Errors of Our Youth, and prove that bands can still make creative and innovative punk rock. 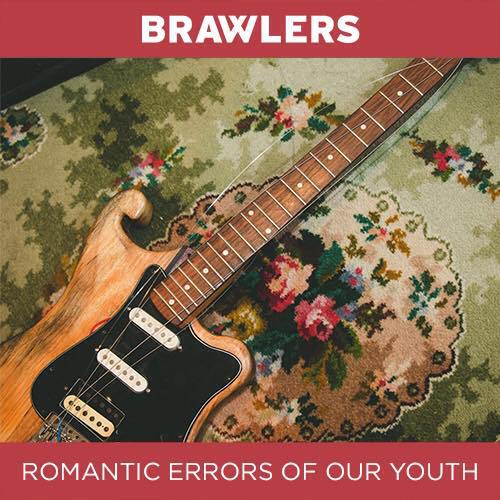 Leeds band Brawlers release their debut Romantic Errors of Our Youth, and prove that bands can still make creative and innovative punk rock.

‍For a band like Brawlers that seemed to play a show every day last year, it’s surprising that they managed to find the time to make such a good first record. Forming from past members of Dinosaur Pile Up, Castrovalva and Leftover Crack; Brawlers are a diverse band to say the least. Their first EP, I’m A Worthless Piece of Shit, demonstrated that the band were able to string together extraordinarily catchy pop-punk songs which subsequently led to them receiving high critical acclaim from the likes of Radio 1, Kerrang and Xfm. Romantic Errors of Our Youth shows Brawlers taking big a leap away from the pop-punk scene in which they were narrowly confined in, and subtly positioning themselves into a much more comfortable and impressive sound.

Arguably, one of the most thrilling aspects of this album is the courageous efforts Brawlers undertook to break down the barriers put up by their first EP – whether it be through embracing punk rock or by drifting into a world of alternative rock. ‘Holding Back’ consists of exhilarating hooks and unconventional drum patterns giving Brawlers a raucous punk attitude that beefs up their typical sound tenfold. Likewise with ‘No Rest’, the pounding drums, and singer Harry George Johns’ snarls amplify the track, giving the record much more of a bite. Alternatively, ‘Windowmisser’ opens up a different door for Brawlers as the tender guitars and melancholic vocals show a sweeter side that some of their previous tracks lacked.

Nevertheless, there is no doubt that these are still the loveable rogues that we were faced with way back when. ‘High Again’ infuses the bouncy and bubbly nature of Brawlers whilst tactfully introducing mellowed and polished riffs. “I’m off from work cos my stomach went berserk but I’m happy to be here with you,” sings frontman Harry George Johns, proving that simple and straightforward lyrics are equally as effective as lyrics injected with extended metaphors and obvious symbolism. Johns’ honest, straight-to-the-point lyrics are also evident in debut single ‘Drink & Dial’ as we're advised, “don’t drink and dial”, good advice we could all use. This level of unpretentiousness allows Brawlers to build connections with the everyday fan on a deeper level than other bands of a similar genre - as nice as it is to escape into the hectic life of a rockstar that snorts lines off hookers on a regular basis, it’s much more refreshing listening to a band that really get it.

Finale, ‘Romantic Errors’ is a combination of all of the aspects that already made the record so enjoyable: infectious hooks, heartening choruses and experimental punk rock. Just as the album is thought to be over, the band congregate to sing acapella to help fade the album out. With the final sentence, Brawlers cleverly leave out Johns’ final words, “it’s true, it’s true”, causing the audience to subconsciously continue the lyrics leaving a taste of Brawlers lingering in their minds.

Romantic Errors of Our Youth is the older brother to EP, I am a Worthless Piece of Shit: it knows more, it has the audacity to do more and the willingness and opportunity to make more of itself. This album marks a huge step forward for Brawlers and will undoubtedly push the band further this year. With the news of 28 shows during April and May, there’s no excuse to miss Brawlers.