What d’you get when you put Horsefight, Tigercub and Dinosaur Pile Up all on the same bill? Utter carnage. Hats off to Club The Mammoth - due to be at The Garage, Islington, Fridays. 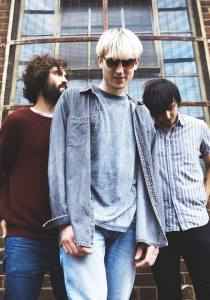 What d’you get when you put Horsefight, Tigercub and Dinosaur Pile Up all on the same bill? Utter carnage. Hats off to Club The Mammoth - due to be at The Garage, Islington, Fridays.

HorseFight opened up the night with their energetic live performance and chaotic riffs. HorseFight are weird, but in the best way possible. Their stage presence is something that can’t be matched and they have the music to match their live performance. The constant chanting of, “HORSE! TIGER! DINOSAUR!” albeit slightly annoying after a while, showed that gigs aren’t just about seeing the headline band – it’s about all the bands on the bill. And when you find bands like HorseFight, you realise how good support bands can be.

After HorseFight, came the impeccable Tigercub. With the amount of Tigercub t-shirts on show, it was clear that there were a lot of people there to see this hotly tipped three-piece. These guys are rapidly building up a fanbase and quite rightly so; the melancholy vocals from Jamie Stephan Hall, combined with the heavy grunge guitar, bass and drums is an excellent concoction that sits perfectly between bands like HorseFight and Dinosaur Pile Up. Playing a set full of new songs that all have the same distinct Tigercub sound, yet still managing to add something new to each track just proves that this band are on their way to something big.

We at Raw Meat are pretty sure Dinosaur Pile Up pick THE best tracks to walk on to – ‘You Think I Ain’t Worth A Dollar (But I Feel Like A Millionaire)’ by Queens of the Stone Age back in February at Scala and then ‘Iron Man’ by the mighty Black Sabbath at the Garage on Friday. Picking these killer tracks is, no doubt, going to get anyone excited for what’s about to proceed. Kicking off with ‘Arizona Waiting’, they got the whole crowd going crazy, which seems to be a recurrent theme at every Dinosaur Pile Up gig – particularly this one. ‘Birds and Planes’ was belted out next and by the third track in, the guys had barely even started playing the next song before the crowd were already singing the start of ‘Mona Lisa’. DPU played a good mix of songs from their heavier debut Growing Pains as well as Nature Nurture; bound to please both old and new fans of the band. They even dusted off ‘All Around The World’ - a phenomenal track that sounds even better and bolder live. The diverse difference between the two albums and therefore the tracks that were played was almost indistinguishable during the set. At most gigs, you’d normally expect the crowd to enjoy one album’s sound over the other, but here it seemed like each is loved as much as the other, proving that this band are capable of taking huge changes in directions with regards to their sound and still be loved for it.

One thing that was apparent throughout the whole set was how happy the band were to be playing a show in London. After playing all over America and Japan, it’d be possible that this would be a walk in the park for these guys and pretty meaningless in comparison to the things they’ve been doing all year. But Matt Bigland (singer) told the crowd that despite these huge things they’ve done, being at home is what really matters.

During the encore, the band began with a risky cover. Anyone covering Nirvana is a bold move because, well, it’s Nirvana, but Dinosaur Pile Up pulled it off SO well. Despite not really being able to distinguish what Kurt Cobain/ Matt Bigland was saying in ‘Drain You’, it’s apparent that everyone at the gig – no matter how old or young – knew what the song was and was enjoying it as much as the next person. It just goes to show that music never really ages or fades, people can still connect with it - it was incredible. The finale to the wonderfully chaotic show was ‘Nature Nurture’. This song just speaks volumes when played live. Whether it’s the breakdown in the song at the end that’s prolonged for what seems like eternity or the whole meaning of the song that’s enhanced live – whatever it is, it sounds huge and is the best way to end any gig.

Despite the constant line-up changes, these guys sounded like they’d been playing together for years. With Mikey Sheils’ insane power behind the drums, Jim Cratchley’s ease at playing bass and Matt Bigland’s huge talent at playing guitar and creating the most ludicrously catchy riffs and chorus’ – these guys need to stay together and continue with their chaotic and true rock n roll gigs.