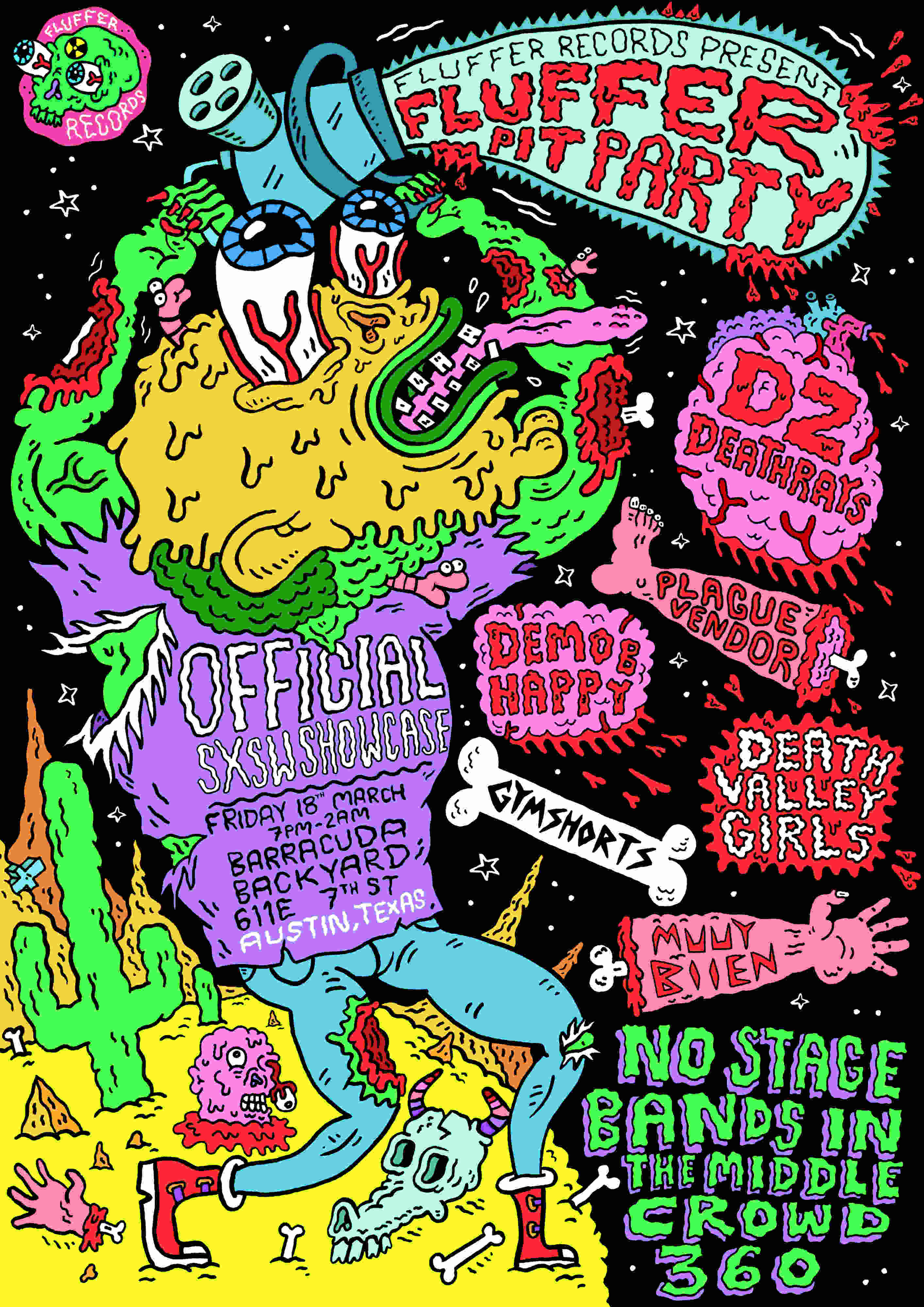 My first ever gig experience was a raucous pit party, and so it's with great pleasure that we announce that our good friends at Fluffer Records will be holding their very own Pit Party at 2016’s South by Southwest festival in Austin, Texas.

Set to take place in the backyard of Barracuda Bar, the Pit Party will play host to six bands that the good team at Fluffer think will make SXSW sit up and take note.

Noisey punks, Muuy Biien from Atlanta, Georgia have hook-laden lyrics and simplistic, high octane riffs that run over you like a speeding train. Their bass lines are from a different era of punk and if they belong anywhere, it's in a pit. We haven't been able to stop listening to their 2014 album D.Y.I., which (where possible) we strongly recommend to be taken with high doses of sunshine.

Stoner punk (stunk?) with elements of sixties surf rock and a natural angry energy; GYMSHORTS are basically the perfect band for how you're feeling right now. Through all the crashing drums and call-and-response guitars there's a creepy intelligence that you won't be able to shake. Press play, thrash, repeat.

No Backsies has everything you could want in terms of an introduction. Listen out for the X-Ray Spex meets Sonic Youth vibes in 'Oh Brother'.

Next band to be announced, Death Valley Girls have that twitchy vocal that sets you on edge and guitars that storm through the fuzz. Their self-described doom boogie is hugely addictive and, hailing from Los Angeles, they have sunshine in their bones and a timelessness in their sound. Listen below, but also track down 'Wait For You'; it features a guitar and an organ solo happening at the same time and it's fantastic.

You may already know that we're fans of Demob Happy here at Raw Meat. We love their spaced out sound, we love the volume of their guitars, we love the strength in the drums, and we really love their cover of 'I like Marijuana' by David Peel. They always bring the noise at a live show and, representing the UK at SXSW will be no different.

We're already celebrating the release of Plague Vendor's new album later this month by listening to 'Jezebel' on repeat (download for free from their website). Drawling desert guitars skirt round punk bass lines; their urgent psych sound and a frontman for the ages make them a full sensory experience to behold. Get involved.

Finally, the disgustingly fuzzy jewel in the crown of this line up, headliners DZ Deathrays will be tearing it up in the desert. There aren't words to describe the feeling of seeing this band live; the crowd tending to be as much of the show as the band themselves. This Australian duo are one of the most exciting and life-affirming rock bands of our generation and we recommend taking a trip down memory lane on their bandcamp to listen to some of their earlier recordings - get riled up.

The good people at Fluffer have kindly wrangled all these bands into one handy playlist as well as on one handy lineup, so listen below to wet your appetite further.