This is it. The final countdown. Flufferfest - you stole our hearts and left us with hangovers, but we love you dearly. Roll on 2016. 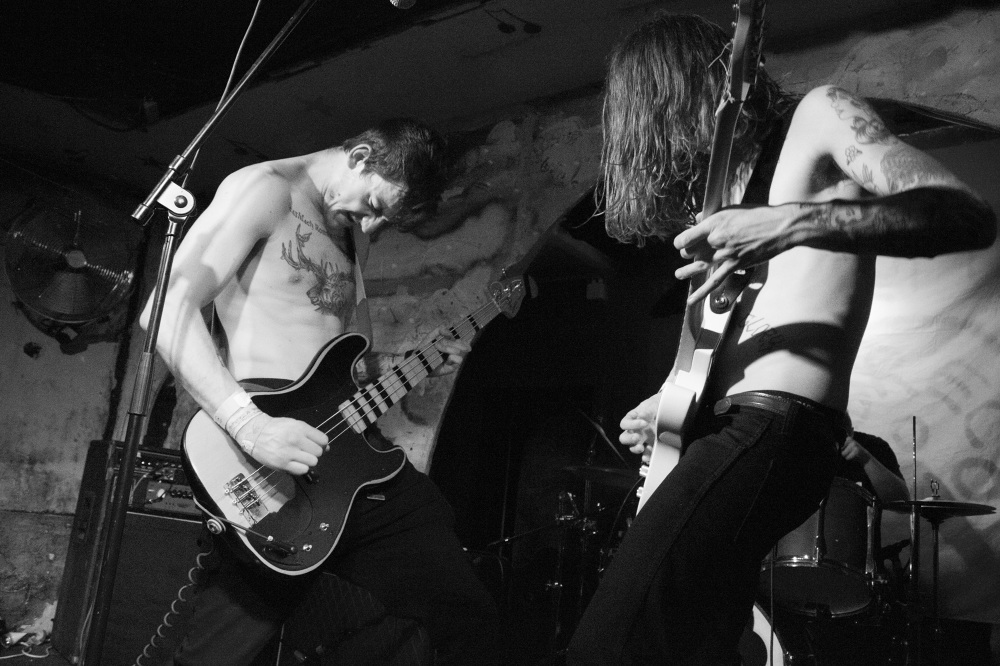 This is it. The final countdown. Flufferfest - you stole our hearts and left us with hangovers, but we love you dearly. Roll on 2016.

Ok. Let's do this. First up were Madonnatron; straight-up and riffy with an off key, slightly swinging in and out of time, garage punk charm. Opening the day as one of the weirder acts, these women stormed through their set with creepy vocals and reckless abandon, kicking things off in cowboy boots.

Next band, Krak Krak absolutely tore through the air. Simultaneously sludgy and screeching guitars grumbled riffs from the depths while vocalist Chris Hollands put everything he had into his guttural cries. Their songs feel fast, but you're headbanging slow as the repeated vocal lines interweave with almost mathematical changing rhythms.

Next up in the line-up were DUDS, but they got stuck in traffic on the Megabus so Bonfire Nights went on early.

Bonfire Nights' spacey garage rock set started mellow but hit big screams and classic rock riffs before it was over. Their sound is huge, and really interesting. Not like how you describe your friend's cooking as interesting, but genuinely of interest. The guitar-lead songs were backed by late sixties organ riffs, second vocals, dynamic drums and the most relaxed bassist on the planet (sat dangling over the edge of the stage). The lead vocals were tonally awesome, and were performed by a chilled, unassuming looking guy. Like I said, really interesting.

In the nick of time, DUDS piled through the door and with minimal line-up shuffling went on afterwards. And the absolutely f*cking smashed it. Playing heavy but melodic garage rock with (among other things) a literal toilet seat guitar (or something like a guitar, but with three strings, but that wasn't a bass or a ukulele) held together with a lot of tape. Also, come to mention it, I'm pretty sure the bassist's bass was child-sized... anyway they played great, rambling garage punk songs with ear-splitting drums. They're currently called DUDS, but occasionally go by "Susan's"; regardless, they had great riffs, great chops and were a great band to watch live. For all the lo-fi-DIY posturing they are actually all incredible musicians, dual vocals tearing through the riffs and lines while rolling sixties drum beats clawed through their distortion. Amazing.

Next up were H. Grimace, who combined great vocals with really cool bass lines to create music that's melodic and shouty all at once. Fresh off a tour of France and somewhat sleep-deprived, they peddled their (kind of) modern grunge with nineties vibes glimmering through in the writing. They let the riffs lead the way with powerful vocals filling in the spaces between. I felt for them as they had a tough set, technical difficulties-wise, but they sounded fantastic. Alt rock awesome; I came away a fan.

Next band, Desert Mountain Tribe, sound pretty much exactly as their name would suggest. The distant vocals were performed by their amazing singer, the drum sound was absolutely huge, and the guitar riffs delayed and rippled. They got a big crowd, created a great vibe in the room and had some brilliant tunes. Shimmering desert rock.

After the howling guitars of the desert subsided another EP was being launched off the back of Flufferfest, this time it was that of The Night Jars. I've not seen them before and the overwhelming impression I was left with was one of searing weight. The guitars were searing across the packed room's eardrums and the music was heavy; seriously heavy. Their energy was thrashingly high throughout the performance, and the dual guitars worked together while remaining individual as strange effects were layered over the vocals. Their set consisted of a lot of sweat, a lot of movement and a lot (I mean a lot) of riffs. Having said that, I felt like the songs were lead by the rhythm section. The whole process was a non-stop onslaught.

Nineties vibed garage rock band Virgin Kids were up next and their lo-fi dual vocals and fuzzy wall of guitars had a hypnotic effect. This London three-piece write carefully pieced together songs and then deliver them with a fierce energy and fuzzy determination.

Purple Heart Parade brought their psychedelic, glistening sounds to the stage next. A combination between spaced out psych and droning shoegaze, made with Eastern influenced guitar parts and distant echoing vocals.

The next band were the superlative Sewer Rats and, although in no way a reflection on LOOM or the legendary Telescopes, for me they were the headliners of Flufferfest. They played the best that I have ever seen them and were absolutely in their element. In their playing, it's clear that they're aware of how impressive and heavy their music is. From the second they started their set they were incredible. The guitarist and singer is a talented and electric performer, the bass lines are flawless; they're just a really good band. Endless riffs, energy and joy, Sewer Rats are infectious to watch. The songs are strong, messy and more instrumental than not. A truly wonderful rock band.

LOOM are a post punk dream with robotic guitars and hollow vocals echoing over snapping drum beats. As they grow in reputation, seeing a band with this kind of command in such an intimate setting will become harder and harder. Their songs feel timeless and stay with you after just one listen. They've also released an EP of covers, which gets a big thumbs up from us.

Finally we come to legendary headliners, The Telescopes. Call it spaced out shoegaze, psychedelic rock, dreamy noise, whatever you like; The Telescopes are a band everyone should listen to. Formed in the late eighties the band played a combination of new and old tunes with drones, rolling guitars, hypnotic melodies and above all, noise.