Punk rock etiquette doesn’t get much better than Frank Carter & The Rattlesnakes and Sailor Jerry Rum. 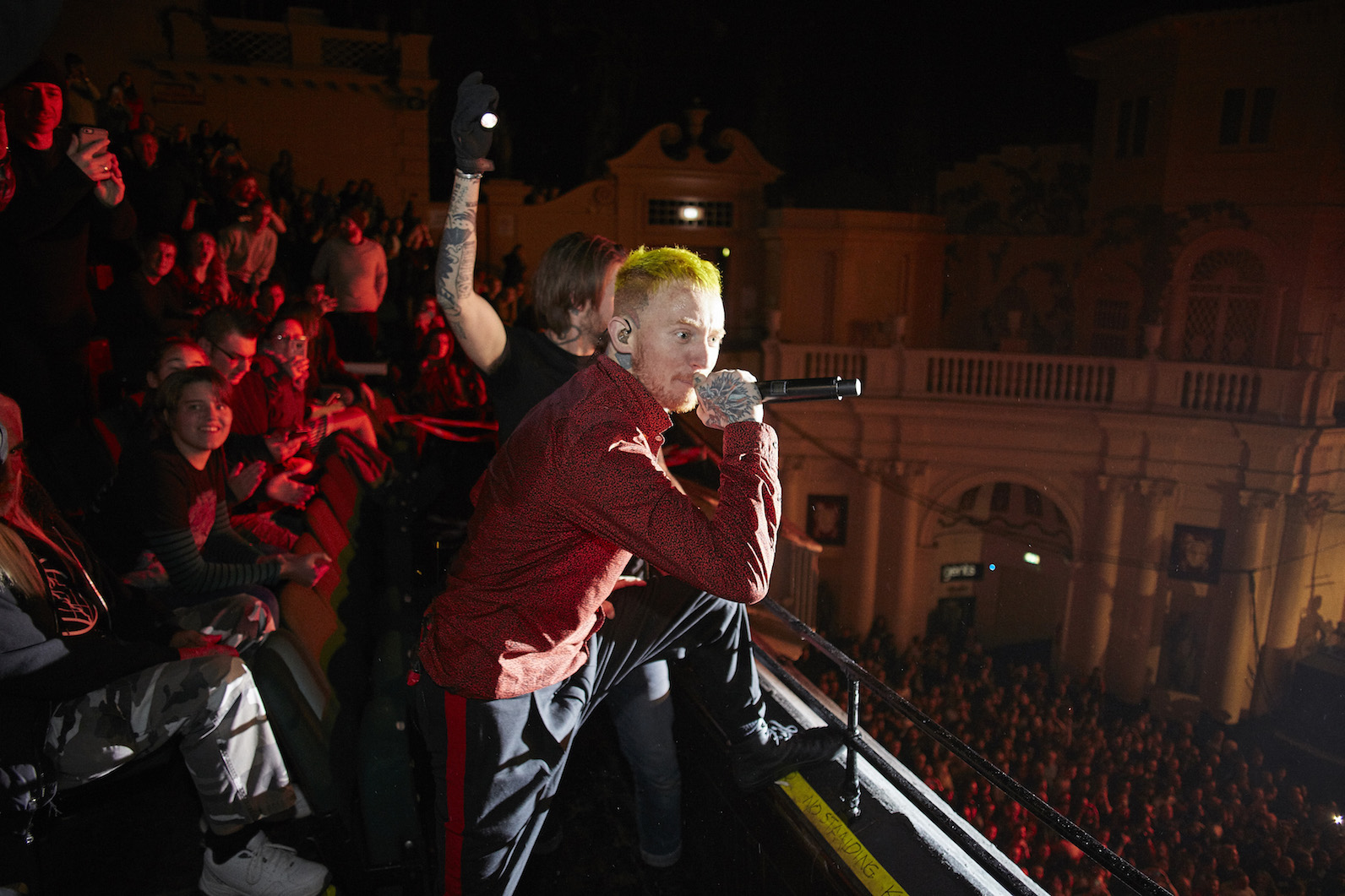 Punk rock etiquette doesn’t get much better than Frank Carter & The Rattlesnakes and Sailor Jerry Rum.

Brixton Academy: 14,000 seats, five bars, litres of Sailor Jerry’s rum, and thousands of fans singing collectively under the searing stage lights. Ladies and gentlemen give it up for Frank Carter & The Rattlesnakes and their astounding accomplishment of selling out one of the UK’s most notorious venues.

Finding the right support act can be difficult: they can either outshine the headliner, or become a background noise while queueing for the cloak room. However, the choice of homegrown supports playing tonight only, prove how supportive Frank Carter & The Rattlesnakes are within the current music scene. Something incredibly honest and hard to come by in this genre. Despite missing the emo pop punk-esque support band, Basement, the praises being sung from the crowd around suggests that it won’t be long until the home grown five piece will be following in the footsteps of their headliners.

Now as the following act exit the stage, the venue’s atmosphere is electric with the anticipation of Frank Carter gracing the stage himself, which is why the moment the lights dim, Brixton comes to life in full force seconds after the final chant of “Ratt-le-snakes-Ratt-le-snakes” fades.

As the Rattlesnakes roll out one by one on stage to the epic backing track, Frank’s entrance causes an eruption of cheers that overpowers the speakers entirely. Often when a band promises to play their (or most of their) entire discography, we naturally assume it’ll be the latest album in full, but Rattlesnakes are not promise breakers. Jumping straight into 'Primary Explosive', 'Fangs', and the anarchy anthem 'Juggernaut' I’m almost surprised at how well the audience are holding up crowd-surfers and the vocalist alike, considering how much Sailor Jerry has flowed through the room tonight.

With songs about anger, love, and loss, it’s Frank’s words that make the biggest impact tonight. Just before the pitter patter of the drums for 'Wild Flowers', Frank & Co announce that only female crowd-surfers may participate in this track, while emphasising that, “Gigs should be a safe fucking place for women”. That earns a cheer from the crowd, but also demonstrates punk rock as a stronghold for genuine feminism. And this is not only applies to the women, we hear another powerful speech about men struggling with their emotions and the inability to speak out, making tonight’s show beyond memorable.

Catapulting himself across the crowd, Frank spends the entirety of the next few songs on either side of the front barriers, and in true Rattlesnake tradition even manages to ride the crowd to the sound desk before continuing up onto the seated balcony. Of course Frank carter is not the only performer tonight, as the rest of the band match their tempo with Frank’s fury.

No show at Brixton would be complete without an encore, and as the powerhouse five piece make their return with the rowdy 'Lullaby' and 'I Hate You' (cue epic crowd sing alongs and a shower of silver sparks raining down on the stage), the anticipation for the band’s 2018 return is stronger than ever. And, in an unexpected gentlemanly style, Frank wishes Brixton a good evening, before dropping the mic.