After three years in the making, Hawk Eyes have finally released follow up to their debut, Modern Bodies, with the mind-melting Everything Is Fine. 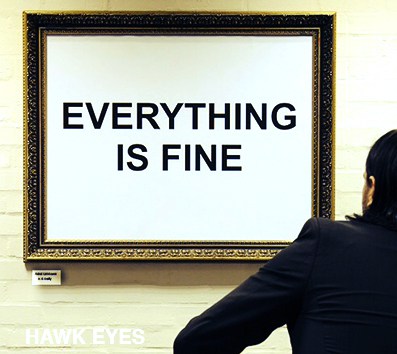 After three years in the making, Hawk Eyes have finally released follow up to their debut, Modern Bodies, with the mind-melting Everything Is Fine.

‍Everything Is Fine is one of those albums that makes you want to throw yourself around and punch everything in sight. In a totally good and healthy manner. It’s pandemonium at its finest. Interestingly, naming it Everything Is Fine makes you presume that the album is just “fine” - a word often associated with something that’s neither good nor bad, just “fine”. Listening to this album though, makes you realise that this presumption is false and Everything Is Fine is fucking good. If you haven’t got it in your ears yet, then do it now.

If the debut single ‘Die Trying’ didn’t get you excited about the album then the first two tracks certainly will. Despite having the same Hawk Eyes sound, ‘The Trap’ and ‘The Ambassador’ reflect two very different styles of Hawk Eyes: ‘The Trap’ consists of a more melodic and likeable sound for a more mainstream audience, whereas ‘The Ambassador’ is intense, vigorous and true hit-you-in-the-face rock. “I’m the ambassador, they piss and they cry, and they cry and they moan” exclaims Paul Astwick (guitar and vocals) whilst stupendous riffs and flailing drums reinforce the right for Hawk Eyes to sound so confident. ‘Permission’ is another track that demonstrates this sort of punk sound and attitude. It’s fucking phenomenal. You have no idea where this track is going to go; it moves from one extreme to another with complete ease and displays an obscene amount of talent. The quaky guitars and constant changes put the listener on edge, trying to anticipate where the song is going to go next. Its fast paced nature and hard-hitting heavy rock creates an incredible amount of noise - you to enter a world where anything and everything is rock. Rock is your life now.

As easily as they make you enter this world, they can easily lead you out of it. I wouldn’t particularly say ‘The Ballad of Michael McGlue’ is a ballad, but it is certainly one of the softer tracks on the album, portraying their versatile sound that continues into ‘More Than A Million’. With riff after riff after riff, it’s pleasing to hear a change from the hammering rock to something more profound and relaxed. This state of composure quickly changes as Astwick’s vocals become sultry and seductive in ‘More Than A Million’ whilst slithering through the noise and sludge of guitars, bass and drums. One thing makes this album so defining is the way each of the band members manage to engage their own personal flair adding to the already remarkable Hawk Eyes sound.

I could go on and name all of the 'stand-out' tracks on the album, but it would just end being a track listing. All of the songs on Everything Is Fine have been executed with so much precision that it makes the album incredibly difficult to fault. It contains a true essence of rock and is bursting at the seams with incredible riffs, hooks and breakdowns. Hawk Eyes have stayed true to what makes rock music so good instead of bowing down to corporate wankers and making their music sound suitable for daytime national radio. Hawk Eyes have produced a proper, dirty rock album, and it is impeccable.

See Hawk Eyes live at the below dates: