In medical terms, hookworms are parasitic nematodes that live in the small intestines of its host, that could be anything from you and I, to your pet dog. 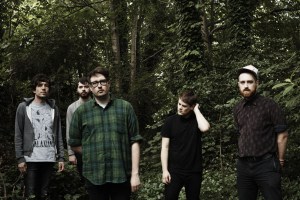 In medical terms, hookworms are parasitic nematodes that live in the small intestines of its host, that could be anything from you and I, to your pet dog.

Music-wise, Hookworms are a five piece band that fall into a host of genres ranging from alternative rock to just noise. However, judge for yourself as we bring you their latest video release for ‘Radio Tokyo’.

The music video itself is the visual embodiment of the bands abstract sound. Directed by Sam Wiehl, projectors and lucrative light shows take centre stage and lures the viewers’ attention away from the band's members that are hardly visible. This ultimately makes the listener appreciate the single, 'Radio Tokyo' (out 16.02.15) much more. The song certainly grabs your attention.

Wiehl describes the thinking behind the video, “The idea was to use multiple projectors to hit a series of transparent screens to create an installation that the band played within, and visually capture the energy of the track”. It’s the first time that Hookworms have ever appeared in one of their own music videos; “making it made me feel kind of ill” jokes vocalist MJ, “but I’m really happy how it turned out. Sam’s projections are beautiful.”

If you love the unpredictable nature of ‘Radio Tokyo’s futuristic rock n roll as much as we do then check out the band’s latest album The Hum or go one further and see them on tour. We're in no doubt that 2015 will prove that Hookworms have it in them to get better, bigger, and of course bolder in every direction.

See Hookworms live in the UK at the following dates (click venue for tickets):