Artist Russell Taysom has briefly opened the Pandora's box of his mind to answer a few questions for us on his work. 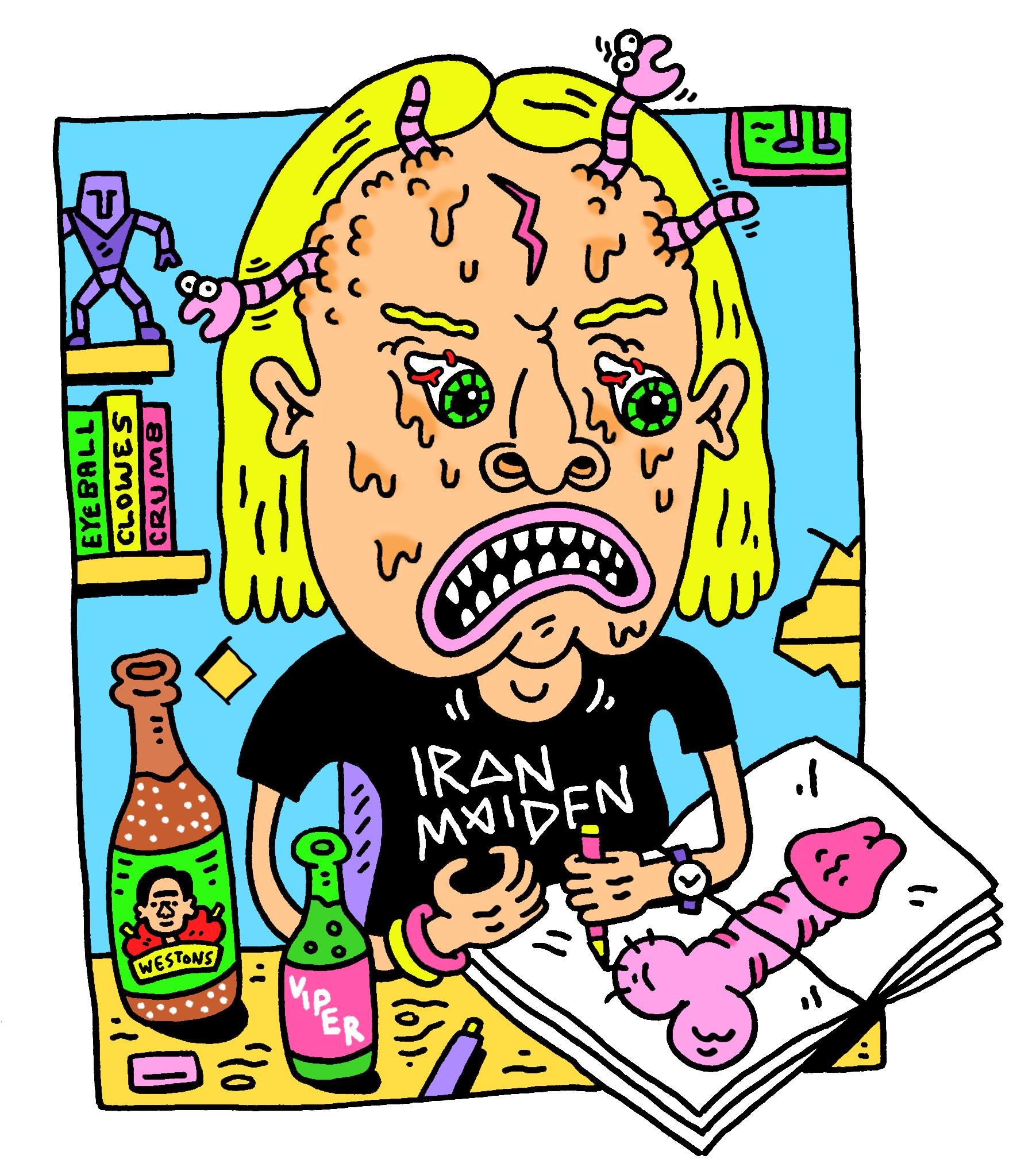 Artist Russell Taysom has briefly opened the Pandora's box of his mind to answer a few questions for us on his work.

We first came into contact with Russell Taysom's work through his association with Fluffer Records, and were completely charmed by his neon nostalgia. This month, Russell was kind enough to take our logo and did us the honour of dragging it through toxic waste. So, to mark the occasion, we thought it appropriate we asked him for a little bit of background on his unique, hyper-gross vibes.

RAW MEAT: Let’s talk about your trip drippy style, where did it come from?
RT: The drippiness comes from Green Jelly and Ugly Kid Joe.
What influenced you to get it to where it is now?
I'm also inspired by Boglins, The Toxic Crusader, Street Sharks, Garfield, Aaahh!!! Real Monsters, Beavis and Butthead, Ren and Stimpy, Rocko's Modern Life and Robert Crumb.

What would you say are some of your favourite designs / pieces that you’ve done? And why?
I've got three favourite things. My Hulk drawing which I usually use as my business card and has been made into stickers, t-shirts and was the first thing I got properly paid for. A picture called Get Tanked which I did a few years ago for Pick Me Up [a previously annual graphic arts festival]. It's me driving a tank and drinking k-cider. I got 50 made and sold none and it still makes me laugh that I thought anyone who goes to Pick Me Up would be into it. And my poster for Deap Vally. I like that because their management hated it and it nearly didn't get used but that band loved it and saved it!

You’ve been working with Fluffer Records for a while - which is how we met! How did that come about?
Yes! I met Al Brown at The Old Blue Last when his old band Love Buzzard band was playing there and I'd done the the poster for the night. They asked me to do their first single and from there I ended up doing a whole bunch of work for both Love Buzzard and Fluffer Records. I like working with Al 'cause we have a lot of the same ideas creatively and are both really up for pushing the limits. By working together for a while over a whole series of projects I feel like we've created a whole visual world inspired by the bands they put on and the attitude of the label.

Is there anything you prefer listening to while you’re drawing?
I listen to all kinds of stuff. Today I listened to Allah-Las, Green Jelly, Big Black, a wrestling podcast called The Old School Wrestling Podcast, a documentary on George Clinton and some old Howard Stern shows.

We always ask people for a band they love from the past, one they’re loving right now, and one we should keep an eye out for from the future - what would yours be?
From the past...check out Gowanus Mutant Komandos, weird Luke from Mutopia Toys' punk band.

From the present, Gym Shorts and Scully.

For the future, it's Sigue Sigue Sputnik, history will prove them right.

The featured image is a self-portrait. And I've met him, it's not far off.