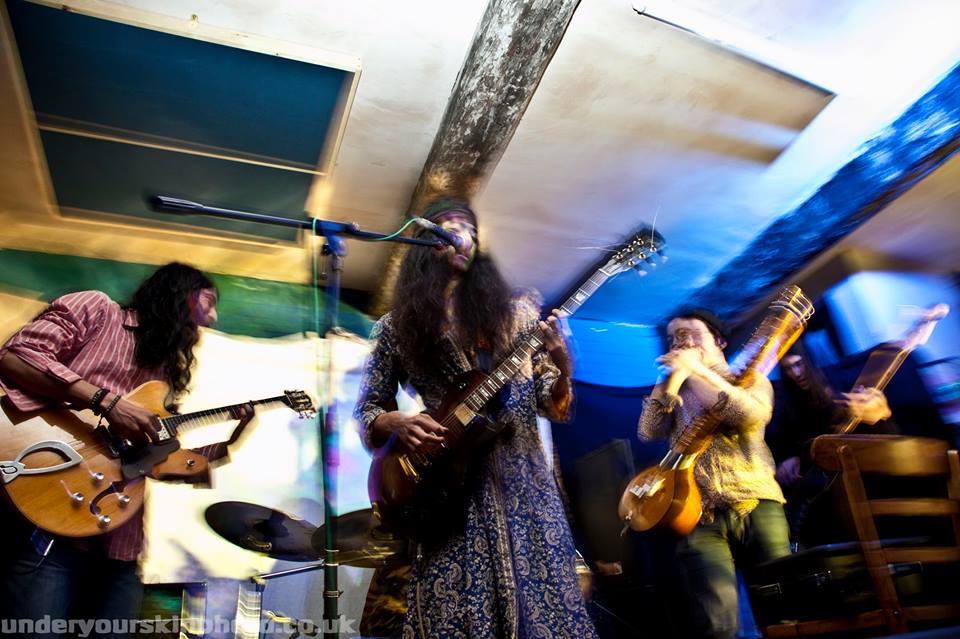 Kikagaku Moyo make no bones about their psych identity, with a gloriously hallucinatory new vinyl sleeve design, wah-drenched jam outs and a fondness for playing in the rural Japanese countryside. Their challenge is to translate their space-rock prog recordings into a set that holds the interest of an audience that has already seen a wave or two of psych bands – they also admit the absence of a scene in their native Japan.

Kikagaku’s music wants to take its listener on a journey, and has the room to fall flat if it doesn’t take hold. Their self-titled EP comes into its own in the space-rock sections between its heavy riffs, the ambling percussion underpinning gentle stabs of reverb soaked sitar. The band’s UK tour is neatly contextualized by the band’s clear fondness for seventies British space-rock – Hawkwind and Floyd loom large.

Kikagaku Moyo never play live without improvised sections, a conceit which is to be celebrated only because of the band’s evident passion and technical aplomb. It would have been all too easy for the band’s music to backfire, getting lost in self-indulgence. Instead, Kikagaku keep their set short, and do an amazing job of linking each section, and each song, together into an unbroken chain.

Special mention must go to sitar player Ryu, who brings an otherworldly tension to any moment where the band might drift towards the musical equivalent of genre fiction. The band plays well with the unsettling – there’s plenty of threat lurking like the eponymous geometric patterns behind the surface of their music. They know when to build tension, and when to throw their cards on the table, and their riff driven jams turn the energy of the room on a penny. Also worthy of note is intensely present drummer GO, but too much individual praise diminishes the ability of every member of the band to push the music in unexpected but thematically consistent directions. Operating as a unit, there’s real certainty to each step band makes, and that’s what makes their live set such a deliberate and skillful production. Those seven-hour jam sessions have paid off.

Kikagaku Mayo came across as dedicated, skilled and humble, and while they’ve flown back now, they deserve to be better known. Do your part for psych, check out their music, (which they’ve made available for free) and perhaps we’ll get them back one day. Their 2014 EP Forest of Lost Children is out now via Beyond Beyond is Beyond.