Manchester based Leather Party have got a story to tell. This is part three. Words are by Leather Party, written to be read while listening to latest track 'Mean Like A Snake'. 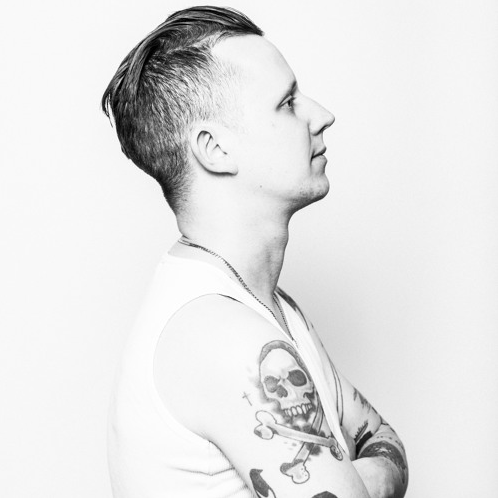 Manchester based Leather Party have got a story to tell. This is part three. Words are by Leather Party, written to be read while listening to latest track 'Mean Like A Snake'.

Cautiously Mark turned his head ’COUSIN DANNY! FUCKING HELL!? When did you get out? Its good to see you man’

‘About a week ago, started working here just after this shitbag on the floor. Part of my probation is to work a shitty job.’

‘Fuck, I’m so happy to see yo…’ Danny cut him short

‘Seriously, you best leave and be quick about it’

As he got on his bike he looked back over his shoulder and saw Danny spit at Charlie Boy followed by a sly kick to the gut.

*Good lad, have I missed you*

Instead of working the night shift he made his way back to Kay’s Karaoke to get cleaned up.

Did I go too far? felt good…great even, but might’ve fucked up……what about Danny, fucking love cousin Danny as stand up he is fucking stand up

He sipped a brown drink and tried to think straight.

How did Danny know where I was?  Where is he now……..He’s in fucking trouble I know it…I fucking know it.

He washed all the mud and blood from his hands and deep beneath his fingernails. After cleaning his hands retained a pink hue.

Just wait…wait. He will ring

An hour seemed to pass and the phone rang

As he tried to catch his breath ‘ Not sure, I heard sirens and ‘opped it right after you left’

‘Was he moving? Talking or owt?’

‘Not really, he wer groanin a fair bit though’

‘Well, at least he’s not dead, just wanted to hurt him I got carried away….’

‘I think you made your point.. Listen I’ve gotta go I'm still a mile from home I’ll call you in the morning but you’ve fucking done it here!’

‘I’d heard from Jon Jon, I didn’t think it was true but I kept my eye on that little shit Charlie just in case’

As the phone fell silent he saw back down.

Without a further thought he left Kay’s jumped on his bike and sped across town to confront Jon Jon. The rain had stopped but there wasn't a soul to be seen, he figured it was really late or early, either way it was still icy cold and he felt it.

As he reached Jon Jon’s building he stopped the bike at the corner and quietly pushed it under the canopy of an adjacent building. Smug with the stealth of this action he smiled to himself and hid his helmet behind the bike. He made his way in through the car park and walked slow and in the hope that someone would enter or leave the building so he could enter unnoticed. *YES!* As he reached the door some townie mush left the building.

I’m in and there’s no night security ha!……Security! Security! Fuck! The security guard at Lyn’s! Fuck, fuck there’s only him and Cousin Danny that saw me.

With the security guard now in mind he raced up the stairs two at a time and reached Jon Jon’s door. All caution had left him and he rapped hard on the door, the TV on too loud inside the flat stopped and slight shadow passed the gap at the bottom of the door.

‘I know you’re in there! Open the door!’

‘OPEN THE FUCKING DOOR YOU SNAKE!’

He could hear the sound of clothing brushing against the inside of the door. He put his mouth to the peep hole and began to hiss.

A door swung open behind him

‘Are you done?! People are trying to sleep’

‘Oi! I can’t be arsed with this, you best fuck off’

He turned and stared at the middle aged man standing there and said nothing. The man frowned heavily as he stepped back and closed his door. He turned back to Jon Jon’s door and knocked quieter than before and whispered.. ‘Jon Jon, open up…Jon Jon open up’. The door behind him opened again except this time the middle aged man was holding a phone to his ear.

‘Hello…Police please? Yeah there’s some idiot making all kinds of noise threatening one of the neighbours’

Panicked but trying to hide it he glared at the cowardly man whilst he spoke to the police and walked back down the stairs slowly banging on the wall of Jon Jon’s flat….’I’LL BE SEEING YOU JON JON’ ‘I’LL BE SEEING YOU’

Out of sight of the cowardly man he ran down the stairs and darted across the street to his bike. He had completely lost track of time. It was pitch black still but it was winter so that was no clue. He rode the whole way home as fast as he could in the conditions and hastily put the bike back in the garage.

This couldn't have gone more wrong…could it could it. Fucks sake. Fucksake That fat old man saw me and that mush security.

As quiet as he could padded up the stairs to his flat and unlocked the door, washed any further remnants of the evening off his skin, hid his clothes deep in the laundry basket and slipped into bed beside his wife. Half asleep she whispered…

‘Where have you been?’

‘Just out on my bike, will tell you more in the morning, try to sleep’

shit, what do I tell her?