A mere twenty-four hours ahead of their headline gig in Newcastle, Losers announced a surprise set at Sunderland's Pop Recs. 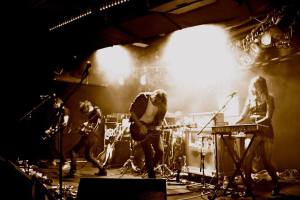 A mere twenty-four hours ahead of their headline gig in Newcastle, Losers announced a surprise set at Sunderland's Pop Recs.

Five piece Losers noted the record store and bassist Eddy Temple Morris felt inclined to say, “I wish there was a Pop Recs in every city”. Never before had I heard truer words spoken, if only Losers could play every night at Pop Recs.

Consisting of five members and every single musical and electrical equipment a van could carry, Losers give an abiding impression; from the delicate harmonies colliding with the out lashes of screams, to the progressive interchanges and interludes. Losers are five bands in one for the price of nothing. So, that begs the question did I get my money's worth?

The answer is undoubtedly, yes; the free event will leave me forever in debt. Although, I never got sucked in to the Muse hype or listened to anything beyond their catalogue other than ‘Plug in Baby’ (yes, I know, "I haven't lived"), Losers remind me of what a heavy Muse might have been. However, does this therefore pose another question, are they unique? For a band that can make a keyboard rock and with a laptop in their band, they have all the traits to be original. From my perspective I saw a band enjoying doing what they love, and with that concept in mind they gave a stunning performance. The over use of pedals, the electronics miss-matched with intense guitar breakdowns, it all comes together. Almost like fitting into a size ten jeans when you're a size fourteen, on paper it shouldn't have worked. But as the old football cliché goes, nothing is ever won on paper.

Losers are inadvertently concise, tormenting with double vocals that guarantee energy as shown through the song, ‘Azan’. It toys with the ideology of progression. The difference between slow and fast becomes a structural theme throughout their material as well as the repetitive nature of their lyrics, such as in, ‘The Chain’, but Losers become much more adventurous and effective when approached with a guitar and electronic focused listen.

Their set may have been short, but Losers made the most of the moment insisting on knowing which bars they should hit whilst their frontman, Tom Bellemy, was back in his home city. Whilst they make huge strides in America for having their music featured in Game Of Thrones and CSI, make sure to catch them whilst they're touring Europe. I for one cannot wait to buy their record So We Shall Never Part.

Pop Recs
Facebook
Buy And So Shall Never Part