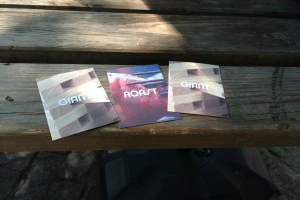 Your intrepid Raw Meat reporters descended upon the sun-kissed environs of Brick Lane’s Vibe bar on Saturday for a firsthand look at the Magners Original Sessions, a series of summery gigs showcasing new music against a backdrop of festival spirit and cold Irish Cider.

The charming hosts greeted us with a wristband and some cryptic tokens, labeled Hog and Ice. We were told the rules of the game; use your cards to make friends until you make a pair. I had to look for the Cube to my Ice, my partner sought a Roast to his Hog, and upon completion of our task we could claim free Magners as our prize. We set about our quest with a hearty passion and soon made friends with an innocent bystander that we shall call Laura.

Laura was enjoying herself.  We took a seat at her table and admired the impressive talents of the Hula-Hoopers, a group of gymnasts thrusting and gyrating for our delectation as we waited for the musicians to finish sound-checking in the background. Scattered around the tables were recipe cards illustrating how to make your own Magners cider sauce. We asked Laura her opinion on cider sauce, “I was not paying attention” was her timeless reply. Then electric anticipation hushed the growing crowd as Swayze and Dana took to the stage.

Dana provided the soulful choruses, Swayze the rapid-fire lyrics, over a sparkling guitar line to get the afternoon started. The set really picked up as they launched into a cover of Don’t Worry, Be Happy. The crowd loved it, and between the glorious sunshine and the free Magners we found a happy warm glow. Laura’s verdict? “I quite liked the last one. I don’t remember how it went.” The music finished to a round of warm applause and we found time for a momentous photoshoot involving a stuffed dog and some longing stares.

We then decided it was time for a quick lunch break, venturing into the market opposite. I partook of a Chinese medley, Joe preferring the “vag dumplings” (we prayed they were merely mislabeled, but dared not ask) and returned to our seats to the encouraging refrain of Bowie’s ‘Let’s Dance’. A drumkit had been erected bearing the logo ‘LONGY’, and a curious looking fellow with a mohawk, vest and aviators was wandering around waving a trumpet with intent.

I confess, I was suspicious of Longy. The Union Flag draped over the microphone stand was betrayed by a suspiciously Americanised accent, and the lyrical references to telephone operators had me asking myself when, if ever, I had spoken to an actual operator. I was cynical. The vests made me nervous. But when that trumpet kicked in, and our friend with the mohawk made his way theatrically from the bar to the stage whilst pouring his soul into every last note, all of my negativity dissolved. Longy, you won me over, and I salute you. Laura seemed to be a fan too – “Rad”, she exclaimed vaguely, before heading off for a fresh drink.

The message of the #originalsessions seemed to be that music and Magners are a combination that creates new friends and memories. Truth be told, we had a lot of fun and look forward to next years' sessions, which are sure to attract bigger names and bigger crowds. See you down the front.