2-4-1 cocktails at a devilish £6.66 offer some explanation as to the merry mood at The Fighting Cocks... 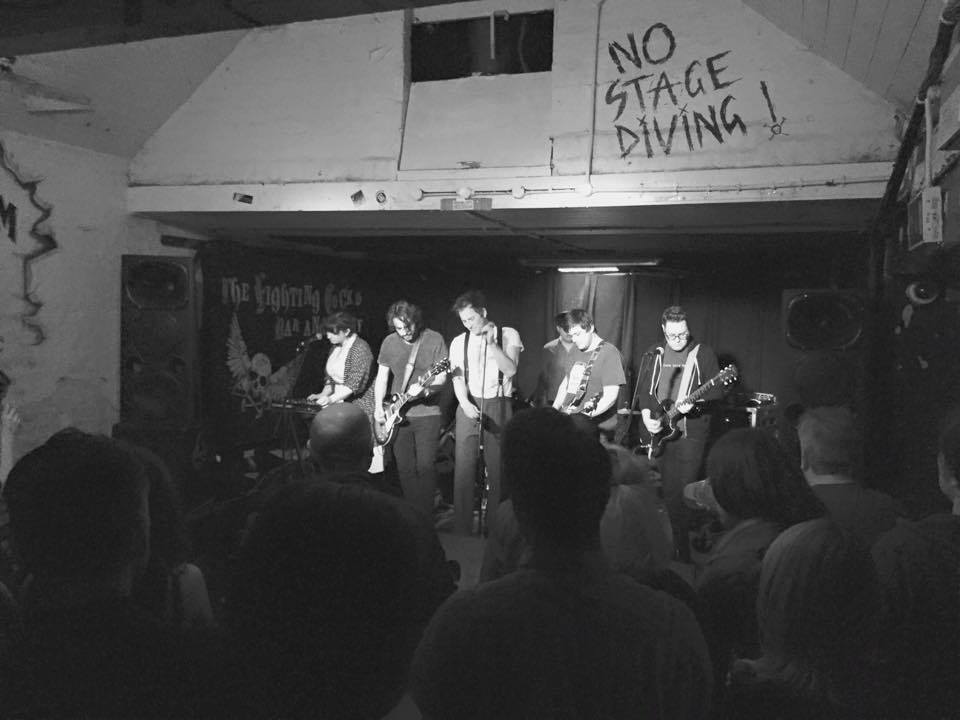 2-4-1 cocktails at a devilish £6.66 offer some explanation as to the merry mood at The Fighting Cocks...

With grown men dancing like gleeful toddlers under the ultraviolet lights well before a note was struck, there was more than a touch of nostalgia at play but who really cares where the smiles are coming from when a gig feels this good?

Marksmen kick us off, part Pulp, part Thin Lizzy riffing with a frontman stealing style and shapes from Withnail. At times he sneers like Liam Gallagher before he lost his voice, at others he looks like Strummer, in his long coat and braces. Their best tune has all the members shouting 'Call Me Sapphire (Her real name’s Grace)', and by the last chorus everybody is shouting back.

Rat the Magnificent, starring Ian Catskilkin of Art Brut fame, bring the blues rock. The happy vibes take a bit of a kicking  as they pound out their ballsy riffs, shifting from BRMC driving tunes to QOTSA desert-rock beats, before finishing with a noisy boomer with shades of The Doors’ 'L.A.Woman' drowned in distortion.

The Marksmen’s Jim Rhesus, musician, promoter and Thoroughly Nice Bloke™ came over for a chat while we waited for Abdoujaparov to set up. He seemed as excited as the rest of us to hear Les “Fruitbat” Carter (Carter USM) and his band, spinning us a few tales of the platinum discs Les keeps in his loo. “Les spent nights in dressing rooms with Thurston Moore and Cobain back in ’91, and had no idea which was which”. For all the success of Carter’s most famous band, he seemed remarkably down to earth, joking around with the crowd from the off.

Abdoujaparov start out with a strangely infectious power punk pop tune with a shouty chorus that felt like classic Beastie Boys. The bassist was on form – my pint nearly flew off the table, the bottom end was so heavy. I mean it as a compliment when I say that it felt like a singalong between mates rather than a gig by a former Glastonbury headliner. “I’ll tell you something that’ll make you laugh/ I wear a scarf/ In the bath” he sings - nobody has a clue what he is on about, nobody minds. It is all bloody good fun, and by the time they finish with the Ramonesy hook of “Hey/ Ho/ Let yourself go” everybody is sweating.

There were no headliners tonight, just friends and fun and a heartwarming lack of egos and bullshit, but The Fades take to the stage last. Their reliable indie rock drags me back to the heady days of 2005, and I can see with my mind’s eye Pull Tiger Tail, The Others, The Cribs, and all the other forgotten bands of MTV2. We were spoiled for a while there, weren’t we? The Fades are Twickenham boys, and the local lads do well, with their drums from The Walkmen and guitars from Bloc Party. They play us out, and everyone leaves with a grin and a bellyful of Raspberry & Apple Mojito. Magical.

The Fades
Abdoujaparov
Rat The Magnificent