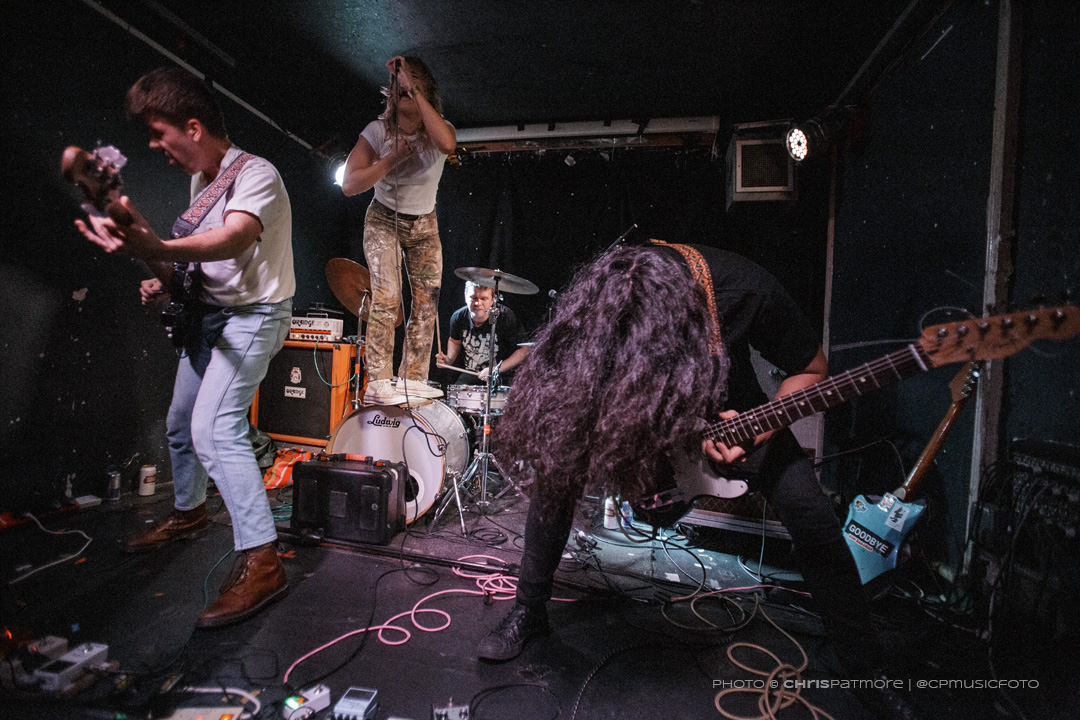 Fresh off of the back of an exciting double single release, ‘Best Girl / Twitch’, Miss June returned to the UK to reassert their powerful feminist message in dramatic style. Supporting the New Zealand band were two impressive British groups: The Caress, and Haze. Excitingly, both supports sported mature and distinct sounds, really warming up the ears of the audience and giving Miss June a tough act to follow.

The first supporting group, The Caress struck a perfect balance in the room; while they were more than capable of moving the crowd with anthemnic (yet melancholic) tunes like ‘Breakfast with Leather Apron’, they frequently stunned us rather into near silence with truly meditative songs such as ‘In Technicolour’ and ’Stephanie (Can I Apply Your Sun Cream?)’. An amalgamation of haunting harmonies, washes of The Smiths-esque guitar and earworm-worthy song writing, The Caress came across as a band that are well worth keeping an eye on.

Following such a pensive performance, Haze's entrance was all the more impactful; their tenacious bass riffs and strikingly rhythmic lead guitar were refreshingly powerful, and were symptomatic of the punk sound Miss June listeners expected. Deeply swung and dissonant guitar melodies in songs like ‘Piochitas’ underpinned the defiant vocals in what became a perfect storm. Haze’s performance was simultaneously precise and blithe, impressing all audience members and ultimately leaving us wanting more releases like their recent EP, ’St. John/ Piochitas’.

Despite the astounding quality of the support acts, it was clear from the first obnoxiously loud crash cymbal why this was Miss June’s headline gig. Each thumping bass note, screeching guitar stab and ground-shaking drum thud had The Windmill fixated (if not a little scared).

Tracks such as ‘Matriarchy’ and ‘I Don’t Wanna Be Your Dog’ were the well-brandished cornerstone of Miss June’s older sound, and were clear favourites amongst the crowd, who were now intoxicated not only on account of the bar. There’s no doubt that by this stage in the evening the audience were firmly confident of the four-piece’s punk proficiency, but it was the new, more carefully cultivated singles that really explained the attention Miss June have attracted from rock’s top dogs.

’Best Girl’ and 'Twitch’ were a true testament to the brilliant songwriting of the band, and an excellent example of how Miss June can so matchlessly command such a sonic ruckus. With notably pinpoint guitar and Ellie Rowsell-reminiscent vocals to ice the feminist-punk cake, Miss June cemented their place as one of the most exciting Kiwi exports.

The band are playing Reeperbahn Festival, Hamburg on 18/09/19, hopefully playing stuff from the album that’s meant to come out around then.

All images are by Chris Patmore