Very similar to, and completely unlike, anything you've ever heard before. 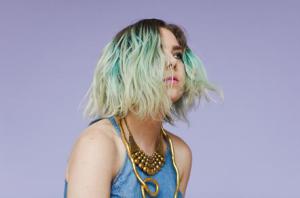 Very similar to, and completely unlike, anything you've ever heard before.

Mozart's Sister has released 'Good Thing Bad Thing', from her debut full-length album Being. Out now via Asthmatic Kitty.

Uncategorise-able, Mozart's Sister (otherwise known as Caila Thompson-Hannant) uses erratic ideas and her own unique musical style to cut through the crap at the over crowded synth-pop table. 'Good Thing Bad Thing' is the sort of track that begs to be repeated -  as though you're not quite sure what you just witnessed. The weirdly hypnotic and unexpectedly simple video (made by filmmakers Eva and Martin) accompanies the entirely-her-own song perfectly - in that it's hard to tell how seriously you should take it.

Her sound has completely bamboozled me; as though the inspiration is taken from studying R&B and synth-pop, drawing out the characteristics of each, and then twisting them to fit her purpose - whatever monster it might create.

Mozart's Sister's charm is rooted in the fact that you're forced to take it exactly as it is; catchy, eerily beautiful and wholly confusing. This is addictive pop for people that hate pop, and it's really fucking good.