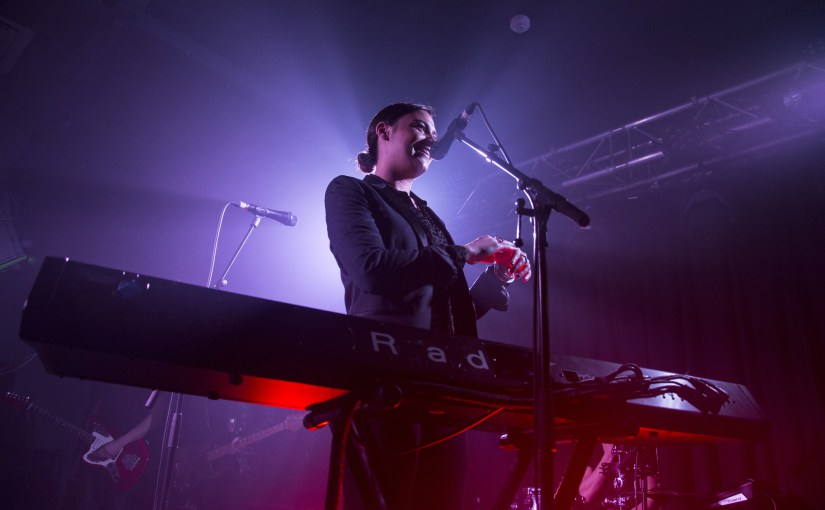 The Black Site kicked off proceedings and although it could be difficult for just two people to look eclectic, they managed and they had a sound to match. Guitars reminiscent of Nick Cave and vocals not far from PJ Harvey were accompanied by drums that punctuated rather than percuss-ed each song. The warmly engaging vocals of Emma ‘Bam Bam’ Dennis were complimented well by C.M.'s backing, which was the only part of their performance that meshed. The vocal, guitar and drum lines appeared to have been written separately and then played together, hoping for the best. Fortunately, unlike some experimental jazz bands, this was not unpleasant to listen to, just strange and alluring. In fact, it was almost disappointing as the set drew on and began to actually gel into a dark and melodic finale. Powerful yet offbeat (in every sense of the word).

Half an hour later Nadine Shah and her backing line up took to the spartan stage, across which Shah proceeded to create a tonally rich scene of sombre and impassioned emotions. ‘Living’, to initiate the set; next, ‘Fast Food’ as the energy quickly increased with brooding rhythmic backing and dark energetic vocals.

Shah conversed with her audience and where her stage presence, whilst singing, was enigmatic, between songs she brought the atmosphere back to the ground with a bump. As she joked and ribbed the crowd with refreshing veracity, both Amy Winehouse and Anna Calvi were drawn on for humoured, off the cuff, swipes. This marked contrast served to create an unusually personal rapport with the room, who enjoyed her quick witted charm.

The low and thunderous ‘Matador’, a paradigm of her antithesis to pop with truly expressed themes of emotional depth, refused to adhere to the expected shape of a song; climbing then falling, never overwrought nor manipulative, but providing an underlying anger rather than pleading anguish. Of the four strong backing musicians the drummer’s lo-fi, consistently driving, beats provided stand out moments. In particular as the band revisited Shah’s first album, with its more eighties keyboard based theme, updated by virtue of contemporary emo vocals​.

The melody may have been stripped back, as they began to play ‘Remember’, but the energy and emotion certainly weren't, as the lead guitarist switched to accompany with haunting cornet. Next, ‘Floating’ featured the rhythm guitarist using Wah and other effects pedals to create an amazing synth sound, accompanied by shuddering base.

Shah continued her easy chat, confessing to a need to fill due to a lack of material... Before a return to the new album with ‘Stealing Cars’, an example of the sophisticated development of her sound with its desolate, sweeping beauty. Concluding the main set was ‘Fool’, with it’s Cure-esque guitars and keyboard, kinetic Joy Division drums, topped off magnificently by Shah’s Jeff Buckley like vocal, effortlessly swooping with control.​

The fervent applause never had time to dim into the traditional shouts of, "more" before Shah was back for the encore and thanking the truly appreciative crowd. At first alone with just the lead guitarist for ‘Divided’, staged with the semblance of performance poet, before a glimpse of Tina Turner ahead of the very last track of the night ‘Runaway’ - neatly ending an emotionally visceral set.

All images by Jerome Tillekeratne