Peace embark on the first of two sold out shows at Epic Studios in Norwich and give an absolute belter of a performance. Their new album Happy People is out now via Columbia. 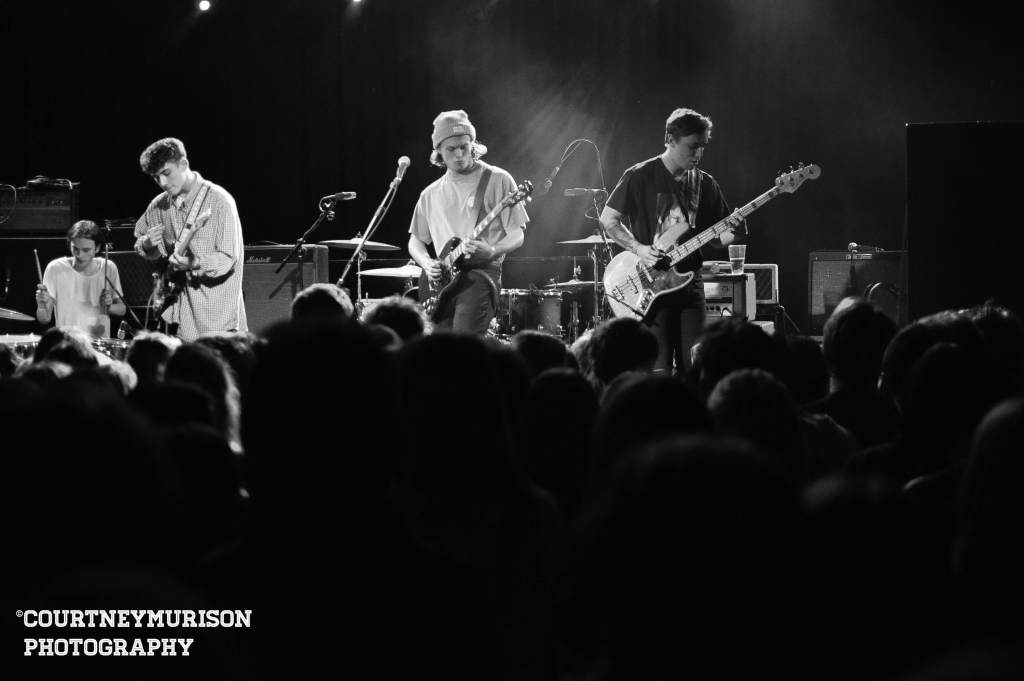 Peace embark on the first of two sold out shows at Epic Studios in Norwich and give an absolute belter of a performance. Their new album Happy People is out now via Columbia.

Epic Studios seem to be getting all the bands at the minute; last year they had the likes of Pulled Apart By Horses and Gnarwolves grace the old ITV building and this year they’ve managed to bag the glorious Peace for two sold out shows. Since the release of In Love in 2012, Peace have been consistently on the brink of success and their live performances only echo their growing brilliance.

Support for Peace came from local band Teen Brains. Peace decided not to have the same support for every show on the tour, whether that’s because they wanted to showcase local talent or not is irrelevant; it meant another artist had the opportunity of playing a sold out show. As soon as Teen Brains took to the stage, they looked like the typical indie band – not that that’s a bad thing – and had similar indie, surf riffs that Peace have become so renowned for. Before the gig, a friend described Teen Brains as a QD FIDLAR (a poor man's version), and initially, it was difficult to disagree with him. But, after about three songs in, Teen Brains came into their own as their indie rock transitioned into heavier surf, psychedelic rock and the fuzz took-over. Unfortunately, there seemed to be a problem with the sound as it became difficult to hear the, already nervous, front man singing which really took away from what would have been a great performance. But, nonetheless, the awkwardness of the band combined with the quirky riffs and hooks made for a superb opener for Peace.

For a band with the recognition they've had, Peace could have easily done an 02 Academy tour of the UK again and sold out the venues three or four times, but that just doesn't seem to fit the Peace prerogative. Despite the quickly collected critical acclaim, they still have a sort of DIY element and don’t tend to fold towards the mainstream, regardless of what devout In Love fans say about their new album. Peace have got something so unique about them, and this gets catapulted to the forefront of their live performances.

Gracing the stage in their black skinny jeans, Doc Martens and tie dye t-shirts, Peace were hailed by an excitable Norwich crowd – one I haven’t seen in a very long time. ‘Higher Than The Sun’ opened up the 17-song set, rousing the crowd before leaping into the wonderful ‘Follow Baby’. Harrison Koisser (vocals and guitar) greeted the crowd after the second song and spoke of the new album, which he said was at number four in the charts… something only he seemed to be shocked about. New tracks ‘Happy People’ and ‘Generation Strange’ were up next. Although their two records still have the same Peace sound, the differences between the two live was extraordinary. Their newer tracks were much more polished, refined, tight and showed a real focus on making everything better than anything they've done before. And it was. It sounded much more skillful, and the intent in Sam Koisser’s (bass) face when focused on timings and cues showed how much more complex and profound these new tracks are.

‘Perfect Skin’ gave Harrison the opportunity to push his normally fluffy vocals intosomewhere with raw power and pent up teenage angst. Singing this to a room full of teenagers that are most likely going through the same insecurity issues, the lyrics to the song seem to have really hit home, likewise with ‘Money’. The breakdown in ‘Money’ alongside the audience singing, “find me something new to chew on”, brought a subtle but distinct smile from Harrison Koisser, showing quite how much this guy fucking loves what he does. His chatting with the audience and sweet and innocent smiles really broke down any barriers between the audience and the band.

One thing that I learnt from Peace’s gig in Norwich is that there is nothing better than ‘1998’. Listening to it live is a totally different experience to listening to it through your shitty headphones that have to be held together with tape. The chaos that ran through the whole performance was nothing in comparison to the true carnage during '1998’; a song that is built on build-ups of riffs, impeccable drumming from Dom and general captivating noise, proving why Peace deserved such high acclaim for their LP.

Peace “finished” on ‘Wraith’ and left the stage just as Harrison’s beautifully multi-coloured guitar was brought on stage for the exquisitely subdued ‘Someday’. Latest single, ‘I’m A Girl’, likewise with the rest of the tracks, sounded ten times heavier than on record and encouraged more and more pandemonium from the audience, just in time for final track ‘World Pleasure’. Arguably the most pop-style Peace track, ‘World Pleasure’ was a strange one to end on, but the sublime bass that weaves through the track created a bold statement and didn’t prevent the stage invasion that Harrison adored - doting fans ruffled his hair and attempted to shake his hand while he was still playing. During the carnage, Sam climbed onto the 8ft speakers and played his seductive bass whilst the audience stood fixated on the sheer awesomeness of Peace. ‘World Pleasure’ seemed to mark not only an end to their set, but the beginning of something bigger and, dare I say better.

Bands like Peace don’t come around often: they make incredible, inventive music, they have chaotic performances instilled with moments of tranquility, and they seem to actually give a shit. Peace played a phenomenal set in Norwich and I for one, am jealous of anyone seeing them on the rest of the tour.