According to Raw Meat’s Emily Pilbeam, the world has not been the same since Pulled Apart By Horses decided to take a year out to work on their hotly anticipated third album, due for release later this year. 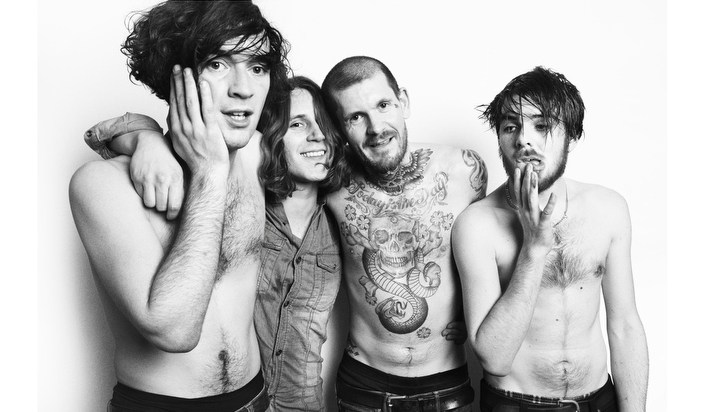 According to Raw Meat’s Emily Pilbeam, the world has not been the same since Pulled Apart By Horses decided to take a year out to work on their hotly anticipated third album, due for release later this year.

The band are best known for their incredible live shows, where they never fail to leave a lasting impression on the, once innocent, audience members, never before exposed to so much power. After a year of waiting for PABH to finally go on tour, the band released a series of dates for venues that can only be described as small, grotty and sweaty – the best kind of venues – and The Portland Arms was no exception.

Although PABH have never been the kind of band to attract adoring ‘fangirls’, waiting for hours before the venue opens to get right to the barrier (me being the exception), it was evident that everyone was excited to see them headline. The Wytches were the support, and they pulled off a belter of a performance, despite a few technical difficulties. It’s fair to say that this band are in for an incredible next couple of years as they’ve already supported Metz, Drenge and Blood Red Shoes. The sheer weight of their performance and their psychedelic sounds are hard to come across these days so it’s best to take advantage of gems like these, as and when they appear.

On to Pulled Apart By Horses, and the band opened with ‘PWR’ from their B-sides album Tough Love Sessions, before proceeding with the mighty ‘Meat Balloon’, creating all kinds of madness as the room exploded into one giant moshpit. Anthem songs, such as ‘I Punched A Lion In The Throat’, ‘High Five, Swan Dive, Nose Dive’ and ‘V.E.N.O.M’ all served their purpose in getting the crowd to lose their minds (and all sense of self-respect) as the sweat seeped from them. PABH also treated us to a couple of tracks from their new album, and by the sounds of ‘Hot Squash’; it’s going to be one hell of a record. Finishing with ‘Den Horn’ really proved what this band are all about – riffs, riffs and more riffs. In particular Tom Hudson (vocals and guitar) makes them a must-see live band; at this show he delved into the audience and rocked out with the fans, before escaping out the fire exit to play in the back garden.

Pulled Apart By Horses are one of those bands that give off pure power and energy in all of their performances; so much so that the audience can’t help but feel it too.

The Wytches image by Keira Cullinane