when?
Where?
Raw Meat All-Dayer
Various

We were so excited by Vulgarians' set at the Raw Meat All-Dayer that we dragged them off to chat to our editor, Finn, almost before they were off the stage. 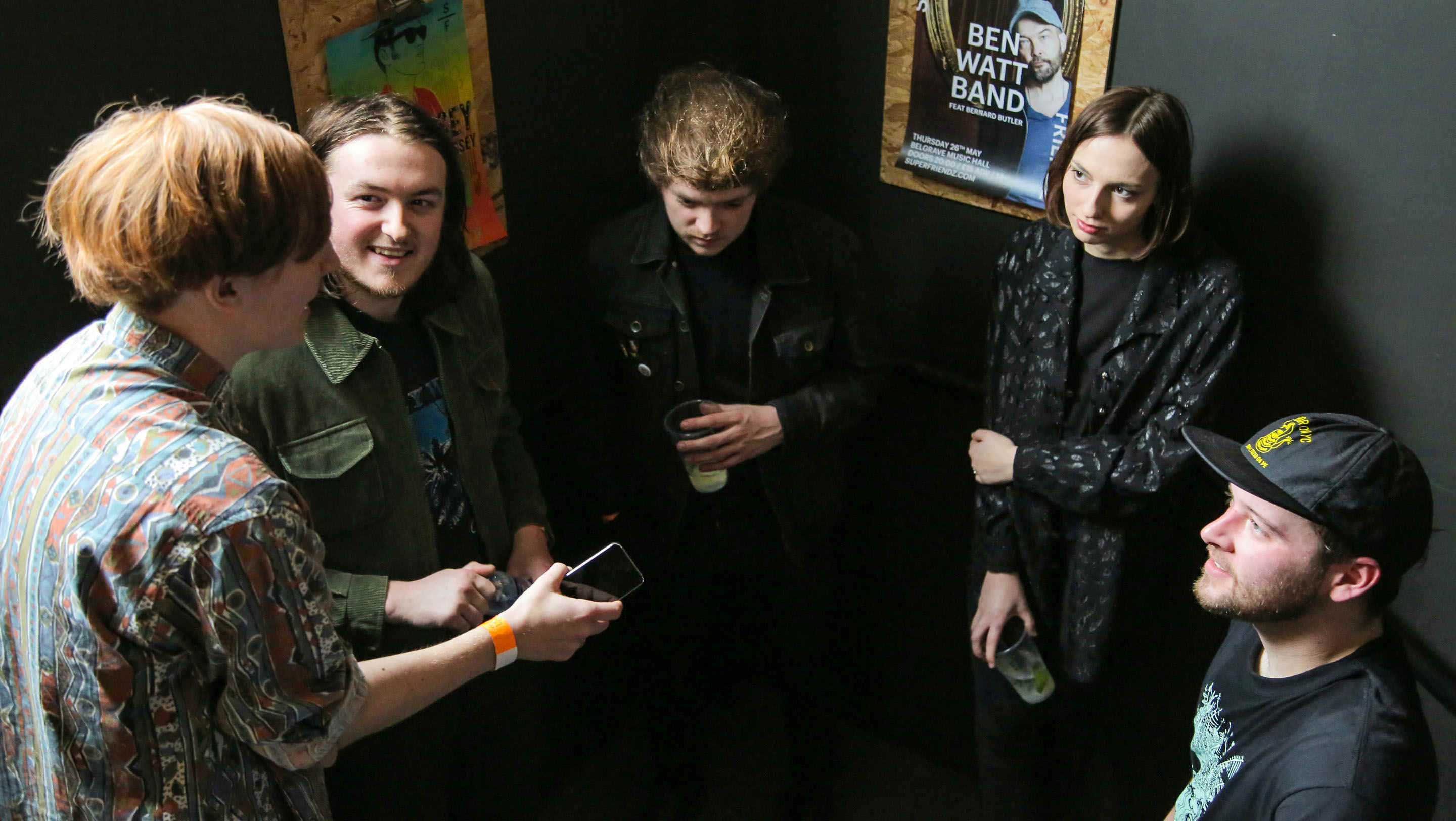 We were so excited by Vulgarians' set at the Raw Meat All-Dayer that we dragged them off to chat to our editor, Finn, almost before they were off the stage.

As Vulgarians' storming new single 'Lost Sanity Smiles' is out today, we thought there was no better time to share some of their innermost secrets with you, that they foolishly shared with us after a few beers in Leeds.

RAW MEAT: So you guys have just written some new material, did we hear any of that today?
Connor Cheesman (drums): Yeah, just a couple. Two new ones tonight. This is our first show in like, six weeks...
Ryan Wilson-Preen (vocals): We've been recording an EP and a single and stuff, so we've been concentrating on that.

Did you guys have a good gig?
Ryan: Really great, yeah. We had a couple of technical difficulties, but we got through it.
You really didn't notice it though. Apart from that one moment when the bass just didn't make any noise. That one, terrifying second.
Ryan: Said 'technical difficulty', yeah.
Connor: It tends to be quite noticeable as a drummer. I was like, "Aw come on, please? Is it coming back?"
Ryan: You've just got to crack on. It happens. It shouldn't, but it does.

You guys are supporting The Wytches at the Fluffer Pit Party. That's going to be sick.
Ryan: Yeah, 30th April. Fluffer Records Pit Parties... it's like, great that we're on it.
Connor: Yeah, we toured with those guys [The Wytches] last year in November. So it's going to be good to see them again.

We know the Fluffer team quite well. We've done a few bits with them and they're all such nice people.
Connor: Yeah Al was the first person to actually give us a big out of town show, so we go way back with Fluffer as well. It's kind of like a big friendsy kind of thing.
Ryan: I think the whole concept of the gig, the playing in the middle, it's interesting, we've never done that before. It's been done before, but they've really branded it I think. If someone says 'pit party' now, you think of Fluffer, which is credit to them I think.
Connor: And they've got so many good bands playing as well. You can't help but notice them.

So with the new material, what's the plan?
Connor: We're gonna continue writing, our second single is coming out on April 15th. 'Lost Sanity Smiles'. And then we have an EP coming out on June 3rd.
Mini album or EP?
Connor: EP, it's four tracks. But we're so excited about it, we've worked so hard on it. And we think it's great, so.
Ryan: What's good as well is, a couple of songs on it we wrote so long ago... credit to the guy, Pat Pretorius who's recorded the full EP. He's just made them sound great.
Connor: Yeah, the production is great. We actually had a lot of fun with it as well. There's some weird bits in there. Nothing over the top, but we just kind of experimented with one of the songs, preduction-wise, which just gives it a bit of listener variation. So we're just really excited to get that out. It's been ready for ages.
Well it must seem like ages for you guys, especially if you've been sitting on some of the tracks for a while.
Ryan: The single as well...
Connor: The single that's coming out April 15th should have been coming out in like...
Jodie Smith (bass): November.
Ryan: We wanted to be sort of picky about things like the video...
Connor: We had a load of set backs because we wanted it to be right.
Luke Ellerington (guitar): It's not down to laziness or anything like that.
Connor: We're not lazy pigs.
Luke: We've not just been eating digestives for six months.

So at Raw Meat we ask about your past, present and future. A band you love from the past, someone you're listening to a lot right now, and someone you think we should be listening out for in the future. Let's start with the past, because I feel like that should be the easiest one.
All: Oooh!
Ryan: What would we say as a group would be our... This is the thing, we all listen to wildly different stuff.
Connor: We do all meet in the middle on some stuff.
Luke: It's a difficult question because there's so much.
Ryan: It depends if it's more of an influence on us, or what we listen to...
Connor: We're gonna make this real difficult for you... and it's not on purpose, we're just terrible at this kind of thing.
Ryan: I don't think one stands out for the four of us. A lot of post punk bands. All the obvious ones I guess.
All those good ones...
Ryan: Ah yeh. All the good ones, yeh.
Connor: Post punk is a massive thing for us.
Ryan: Jesus and Mary Chain...
Connor: PiL
Ryan: And then going back, MC5.
Luke: Velvet Underground.

Ok. Present. Who are you listening to right now?
Connor: I've been hammering The Growlers, but I have been for a while. They're one of my favourite bands ever.
Ryan: I really like Younghusband's new album. That's really good. And Tom Cohen, formerly of S.C.U.M. That's really interesting to be fair.
Luke: To be honest, presently I've still been listening to a lot of stuff from the past.
Connor: A lot of Elliot Smith.
Aw poor Elliot Smith. He had so many feelings.
Connor: So many feelings! I don't have that many feels, but I feel his feels.

And what about the future? Who have you guys been playing with recently?
Connor: Who was real sick that we've been playing with...
I mean you're wearing a Weirds t-shirt... but maybe I won't say anything.
Connor: They're real good friends of ours. They're a great band.
Ryan: We played with a band for Fluffer Fest last year, it was the first time we'd played with them. A band called Dressmaker.
Oh man Dressmaker are so fucking good.
Luke: Dressmaker are wicked, yeah.
Last time I saw them I think I came out a different person. I felt like I'd shed skin.
Connor: They're great as well. They really wear their character and stuff. Strut around. It's just brilliant, the whole thing.
Did they do their cover of 'Be My Baby'?
Jodie: Yeah, in your face. Didn't he steal your [Luke's] hat?
Ryan: We played two sets before them, we'd never seen them before. A lot of people were like, "Ah that was really good." or whatever, and we really enjoyed it and then we watched them and we just like... "Oh my god."
Luke: "Oh my god we're shit."
Connor: The last time I saw them, they stormed off stage because the sound man wouldn't let them have a smokemachine on.
Jodie: They just said "Fuck this".
Connor: They were smashing glasses and shit!
Luke: Not a lot of bands concentrate on the... the vision. The atmosphere. It's great to see.
Ryan: There's a few really good Hull bands as well. A band called LUMER who practice at our practice warehouse as well.
Jodie: They literally just started. Had their first show a few weeks ago.
Ryan: There are so many good bands in Hull to be fair. It's good. It's really good for us to see these bands that have just got together.

So is there anything else you'd like to say?
Luke: We've done all our plugging.
Ryan: Like our band!
Connor: We're playing 9th April, our first proper headline show. And we're planning some really cool shit that we can't announce yet.
Jodie: Ooooh!
Awesome. Well, thanks so much for your time.

All photos are by the unbelievably talented Matt Connell