We asked two of our writers two give us two different perspectives on Reading Festival 2014, and boy did we get it. Read Alex's first ever festival experience. 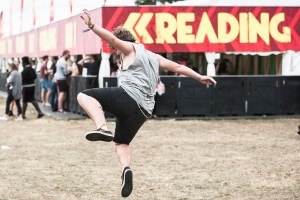 We asked two of our writers two give us two different perspectives on Reading Festival 2014, and boy did we get it. Read Alex's first ever festival experience.

Plagued by bad luck as we were on our journey to Reading, it could have been easy for me to dismiss my first weekend-long music festival as a one-time-only experience, especially as the cold and windy weather made sleeping nigh on impossible. The Jubilee line had decided it didn’t want to move on the Thursday, causing us to miss our coach. Alas, in the name of good rock shows, nothing could keep us from our destination, and we begged for a lift from parents. Of course, by the time we arrived at the campsite (and realised we’d left a whole bag of clothes and all our toiletries behind), the only space for our tent was by the path. This meant we had to deal with drunkards falling into the side of our tent throughout the night. Adopting the mind-set that it was all part of the experience, along with the overwhelming smell of cannabis and dodgy burger vans, we proceeded past dwelling on our poor fortunes and got stuck in to some brilliant live performances.

The weekend was opened by CryBabyCry: a two girls one guy band from Wakefield who seemed very impressed by the crowd they had pulled in. Bearded frontman Jonny Firth is an impressive guitarist, Nici Todd’s drumming is remarkably muscular and Rosie Doonan’s gripping vocals made their bluesy rock n roll tracks one of my highlights from the entire festival. Not bad for the first stage we happened upon when we entered the arena. Unfortunately, an extreme lack of online presence means I can’t go back and revisit their set, nor grab their MP3s. They are currently filming a music video for ‘Go Go’, which will perhaps be the break they need into a less secretive mainstream.

Paramore, who co-headlined with stoner rock veterans Queens of the Stone Age, had their set plagued by equipment issues. The immediate crowd were unaware that the extended sound systems had failed, but during an introduction to the set’s only ballad ‘The Only Exception’, the sound entirely cut out, and so did the stage lighting. An unfortunate event for any band, but unforgivable on the main stage of one of the country's most well-renowned festivals. Luckily, Haley Williams and company kept up their professional air. You can tell that Paramore would never be caught turning up to a gig drunk, or any of the various other typical rock star tropes. They are aware of their luck, and their talent, and do not take it for granted. Williams pulled up a stool, sat with folded arms and crossed legs. She vowed not to leave until the set was complete, and was then handed a separate microphone with which she used to sing their most famous ballad with the crowd, a capella. Despite putting on a happy face and vowing to complete their show, which had previously been enthused with impressive light shows and streamers, one can imagine them heading backstage afterward and exclaiming “someone is getting fired tonight…!”

The weekend’s only disappointment; Vampire Weekend. If there’s one phrase I never thought I’d use to describe Vampire Weekend, it’s “devoid of personality”. Everything from the minutest details of their music to their twitter feeds is spilling with lunacy. Unfortunately their performance at the festival did not reflect this in the slightest. Despite a great setlist, single-focused and Modern Vampires of the City-heavy, Ezra Koenig and Rostam Batmanglij in particular had nothing to say for themselves. Barely a sentence was spoken in recognition of the huge crowd they pulled in (which included King Charles, who accidentally whipped us with a dreadlock on his way past), and they left afterwards without looking back. Luckily, their music is good enough to stand by itself, and Koenig’s vocals did not disappoint. Various members of the audience around me commented on how they didn’t expect him to actually hit the high notes in ‘White Sky’, often likened to the noises you’d make while having your feet tickled.

The most exciting headliner of the weekend was Arctic Monkeys; they provided a hit filled set that would have been perfection, had it finished with ‘Mardy Bum’. Unfortunately, with five albums’ worth of hits and fan favourites to compile a setlist from, it becomes apparent that no-one could ever be entirely satisfied. Ever the showman, Alex Turner donned the symbolic AM style – leather jacket, shirt, trousers and dress shoes. With dramatic pauses and sultry vocals, he owned the show, and the entirety of the audience sat in the palm of his hand, captivated; always hanging on the edge, teetering on every sound emitted from his guitars. As the biggest rock band of the new millennium, theirs is a show every rocker should experience at least once in their lifetime.

New guys on the scene, Royal Blood, delivered the clear stand-out performance of the weekend. The packed-out tent was overflowing with seasoned rock fans - a perfect crowd. When compared with the cautious and sculpted, hair-perfect moshers of higher-charting acts (looking at you, audience of Clean Bandit), Royal Blood’s was a violent, sweaty and passionate show to be a part of. So much noise from just two guys, they join a growing list of furious two-piece bands including Drenge, who were also on the bill. Despite the fact that their album was not released until the day after the festival ended, fan loyalty was notable, and everyone seemed to know the lyrics. Their rise to fame has been meteoric; Matt Helders of Arctic Monkeys wore a Royal Blood t-shirt to one of their own shows, months before the release of their first single. The band are now on track for a #1 album here in the UK, and it is great to see that they’ve got the performance skills to live up to what is sure to be a hit record.

Across the entirety of Reading Festival, we managed to see almost sixty bands.

Seeing some of my favourite acts just long enough to witness a handful of hits and unreleased favourites before heading off to the next hype-machine was a fantastic way to spend a long weekend. Certainly worth the £200 price tag. I can’t wait for the next one! Glastonbury, perhaps?