The guys at Heavy Leather Promotions have read all of our minds and correctly assessed that just an evening of Roadkill is no longer enough. 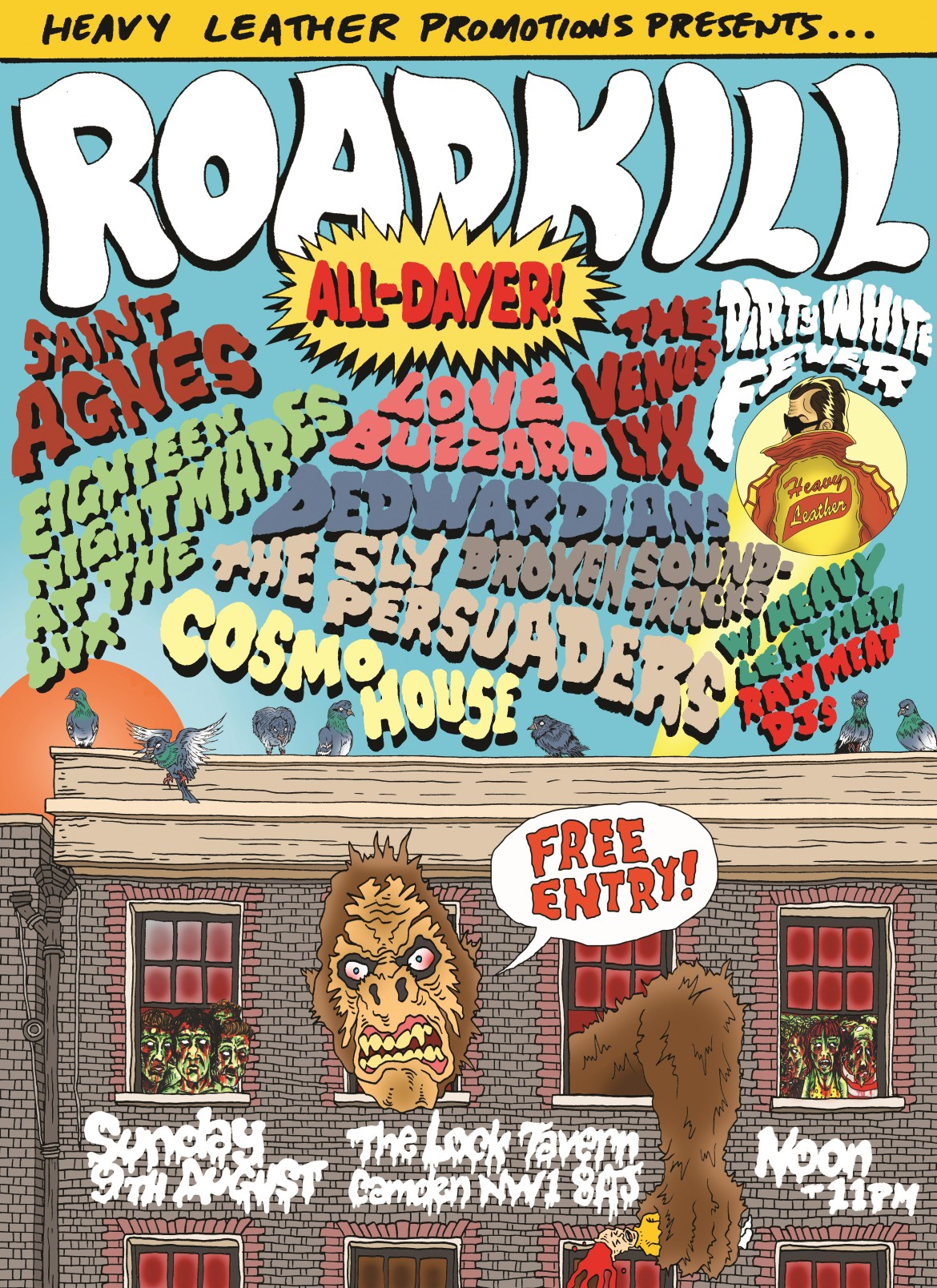 The guys at Heavy Leather Promotions have read all of our minds and correctly assessed that just an evening of Roadkill is no longer enough.

And so, let it be known that on 09.08.15 the Lock Tavern in Camden will be hosting the first ever Roadkill All-Dayer and the icing on the Roadkill cake is that it’s completely free (plus Raw Meat DJs will be there too).

Heavy Leather have pulled out all the stops and are bringing together some of the best bands from their past shows for what promises to be an extremely satisfying eleven hours of music.

The doors open at midday with the bluesy soul of Cosmo House kicking things off at one o’clock; a band that consists of the core guitar and vocals duo from blues rockers The Cracked Belles. Featuring both riffs and vocals that are not to be missed, these guys will definitely start the day by blowing away any of your usual Sunday cobwebs.

The next act, recent Roadkill alumni, Broken Soundtracks, will be bringing their alt-rock Dylan-esque ravings to the stage. When we saw this band play we were expecting a more electronic feel to their show, but don’t let the recordings fool you – it’s a post punk element that comes across the strongest once they get into it. Then by the time 15:00 rolls around The Sly Persuaders will be onstage blaring out their riff driven, distortion-heavy rock n roll. Their gigs run on energy and sweat so we have a feeling that it’s around 15:20 that the day will really get moving.

After The Sly Persuaders, it’s The Venus Lyx’s turn to excite and amaze. Their apocalyptic garage rock rides on energetic vocals and Beatles influenced riffs. They are absolutely incredible live and not a band to be missed.

Dirty White Fever are new to us, but from the sounds of their latest single ‘7.83Hz’ this won’t be the last we hear of them. Their distorted, lyric-driven garage punk is on a par with the reckless abandon of Turbowolf; underlying all the razor beats and overdriven riffs, the songs are catchy and compelling.

As the evening draws in, the wonderful Love Buzzard will drag us with them through into the dusk. If you don’t already know, Love Buzzard write interesting and occasionally intelligent songs hidden under the guise of the noisiest and most chaotic garage punk. Their latest release ‘Cash’ plays non-stop in Raw Meat Towers.

Injecting more of a cowboy blues saunter into the distortion muddied waters of the Roadkill All-Dayer are classic Heavy Leather-ers, Saint Agnes. Their songs feel as though they’ve come through several decades to reach you and they command your attention. There are psychedelic elements, heavy blues influences and a duo lead vocal partnership that brings dirty rock n roll warmth to your heart.

There is no better time in the evening (and after Saint Agnes have got everyone feeling sleazy-good about themselves) for Dedwardians to take their turn. The darkness that underpins their textbook garage rock has elements of the Trashmen and the Sonics thrown in with tight guitar tones, stabbing bass lines and a great live show.

At the very reasonably early hour of 21:30 we come to the headliners of the event, Eighteen Nightmares at the Lux; continuing the foot stomping, dark blues rock theme of the latter parts of the evening this band combine classic rock n roll song structure with squealing (vocals and guitars) and catchy hooks. They’re sure to end the day with a bang, as with the majority of the bands on show (it’s almost as though someone planned it) their live show is as full of energy as their songs are riffs.

This, the first ever Roadkill All-Dayer will also feature a special DJ set from the Heavy Leather team, DJ Scott McMahon and Raw Meat DJs (hey wait, that’s us!) rolling on through until 23:00 for those of you that don’t have homes/ partners/ jobs to get to. Eleven hours, nine bands, three DJs and no money spent – we can’t wait.