Proving that nice guys always win, Roadkill has emerged from its chrysalis as Roadkill Records; London's newest DIY label for all your surf, psych and garage rock needs. 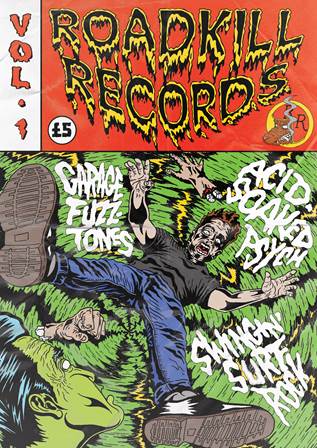 Proving that nice guys always win, Roadkill has emerged from its chrysalis as Roadkill Records; London's newest DIY label for all your surf, psych and garage rock needs.

Roadkill (and Heavy Leather Promotions) have been hosting messy, wonderful, and occasionally career launching, live music and club nights for just over four years - nearly two of which Raw Meat have been in attendance; both DJing and drinking heavily. That's why we're so pleased and excited to see the launch of Roadkill Records, with a debut compilation release acting as a manifesto of their distorted, sweaty intentions. The release of Roadkill Records Vol 1 also means that we get to DJ and drink heavily at the launch party all-dayer in Camden's Lock Tavern.

Roadkill Records Vol 1 is out today on limited edition cassette and features several bands you've already heard us banging on about, as well as plenty that you might be lucky enough to be hearing for the first time. Our personal highlights include the fuzzy and energetic Madrid-based garage-punks The Parrots, the raucous live track from Thee MVPs, the long-haired riffs of Venice Trip, and the foot-dragging, acidic psych from Sunlight Service Group.

Tomorrow's launch party has a line-up so enviable (including Raw Meat's own Darren Parker/ Raw Meat DJs) that Roadkill are having to kick things off at 2pm just to fit it all in.

The previously mentioned Sunlight Service Group will be making any hour of the day feel like 3am, 1973. Their bass lines storm, their lead lines roll straight out of the sitar school of riffs and the beats shatter straight through to your spine.

The dark and fuzzy Muertos bring some much appreciate doom riffs and creeping, cyclical vocals to the party. A band that really embody desert rock for me, you can feel the sand and open dunes in every note.

One of the newest bands on the line up, Mystified prove two things; that post-grunge is really a thing, and that it can be really, really catchy. Screaming, feedback, water-tight harmonics and thrashing break-downs; their recently released EP Lick It is more than just addictive, it'll give you withdrawal symptoms.

Mystified are the band we're most excited to see tomorrow.

The Sly Persuaders are another favourite of the Roadkill alumni. With rockabilly and garage coursing through their veins, there's a cocky swagger in every note. Watch out for the organ player's lines, groaning guitars and foot-shuffling rhythms.

Pulling out the big guns as the day draws on, Saint Agnes will break as many eardrums as they will hearts. Another band with sand in their eyes, their writing will transport you to the Old West - if the Old West was run by mayor David Lynch with Ennio Morricone acting as deputy.

Another band that have just put out a new release, their debut no less, Dead Coast have a darkness deep inside them that they combine with an intrinsic Englishness. If you imagine that the Kinks had never seen a sunny day in their lives, you'll close in on their sizzling organs and distant vocals calling to you through the years. Dead Coast are another live show to look forward to with bated breath.

Those nice guys at Roadkill have also selected their own favourite tracks of the bands playing tomorrow, so that's your Friday listening sorted.