The History Of Apple Pie's psychedelic video for 'Tame' accompanies the first single from the upcoming second album, Feel Something. Out 29.09.14 on Marshall Teller. 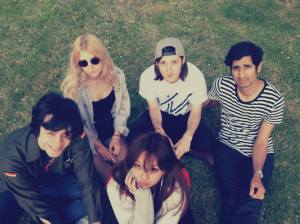 The History Of Apple Pie's psychedelic video for 'Tame' accompanies the first single from the upcoming second album, Feel Something. Out 29.09.14 on Marshall Teller.

The History of Apple Pie have that great blend of nineties blasé vocals and just enough distortion to give them an edge. Their first album had some absolutely brilliant tracks on it (and at the listening party there was free apple pie!) and from the sound of 'Tame' the second will be no different. They've had a slight change of line-up since Out Of View was released last year, with new addition Joanna Curwood on bass.

Feel Something was recorded at Sublime Studios in London and, like it’s predecessor, was produced and engineered by the band’s guitar player Jerome Watson, Joshua Third of The Horrors and Sublime Studios' own Charles Reeves.