The Mountain Goats have released a new album. 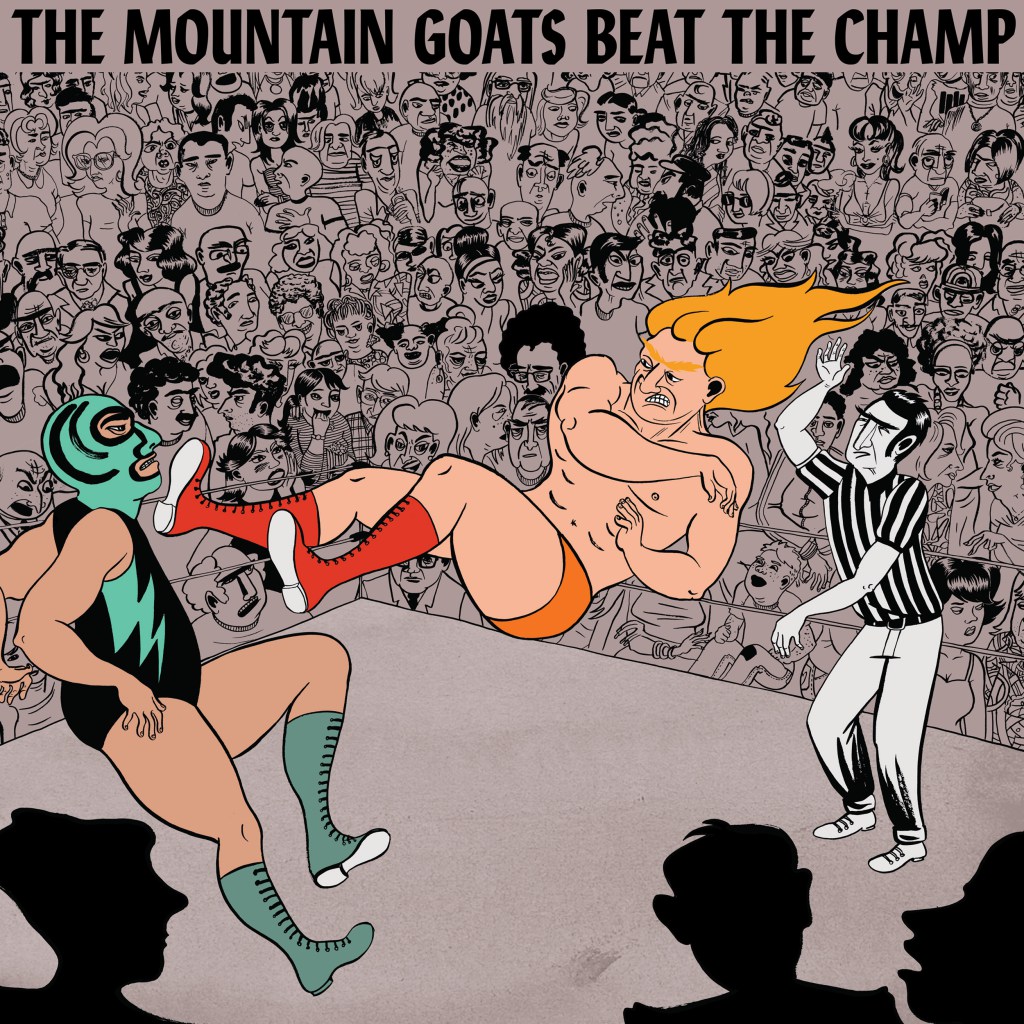 The Mountain Goats have released a new album.

Like just about every release from John Darnielle’s band/ occasional solo project, Beat The Champ is proof that the United States’ greatest living lyricist is a baby-faced former junky who looks like a librarian from a perennially rainy small town.

Darnielle’s music is often soft and poetic, but it never ventures into the flowery territory that can turn other singer-songwriter offerings into eye-rolling affairs. He’s made a career of fitting simple words and phrases together in a way that still manages to evoke emotions that are anything but.

Darnielle has previously used his talents to examine drug use, domestic violence, loveless marriages, childhood, and the equally traumatic states of Texas and Florida. With The Mountain Goats latest, he’s turned his eye toward the semi-professional world of seventies wrestling.

If the album were merely an examination of the work-a-day world of pre-WWE wrestling, it would be quite the accomplishment. What pushes Beat The Champ into near-transcendent territory is the way his slice-of-life songs manage to both do justice to the characters of the “kayfabe above all” era while providing stories that resonate with folks who never cheered along with the spandex-clad exploits of squared circle warriors.

Probably the best example of this is the track 'Heel Turn 2'. Wrestling fans will know that a “heel turn” is when a formerly good or just character (“face” in the lingo) becomes a villain or “heel.” However, that knowledge isn’t necessary to identify with the central character who has given up on playing fair after years of rule-following have left him no better than when he started. Written from the point-of-view of a suddenly evil fan favourite, Darnielle offers an explanation for his actions via a simple refrain of, “I don’t want to die in here” that will stick in the craw of anyone whose unsuccessfully strived for greater things (or anyone familiar with the career of one Hunter Hearst Helmsly).

The yin to ‘Heel’’s yang comes in ‘Choked Out’, a raging ode to a wrestler who is willing to risk his own safety to advance within the system. The heel at the center of the former track delights in the fact that he gets to walk out of a match unscrupulous and unscathed. ‘Choked Out’’s protagonist is a man who has convinced himself that there’s honour (and eventual fame) in pushing his body beyond what’s reasonable.

“Most of the boys won’t ever cross this line / If they all wanna die dead broke that’s fine,” Darnielle shouts from the perspective of a man in a windpipe-crushing headlock. “Everybody’s got their limits / nobody’s found mine.”

That’s not to say The Mountain Goats’ latest is a weepy or grim affair. Wrestling is about entertainment, after all. And it’s clear that Darnielle once gobbled up the gimmicks and showmanship with all the other young marks in the audience. From 'The Legend of Chavo Guerrero' (a song chronicling Darnielle’s real-life favourite wrestler from his childhood) to 'Foreign Object', Beat The Champ finds levity and humour in the actions of blustering gladiators who just so happen to be willing to stab themselves and others in the name of a good show.

Ultimately, Darnielle seems to have found (or crafted) kindred spirits in the lives examined on Champ. Darnielle has spent decades putting every facet of his life on display for adoring fans; he can’t help for feel connected with the glistening pseudo-warriors who would rip their own heart out and throw it from the ring to the announcer’s table if it earned them a loud enough gasp.