London trio Theme Park make a fizzing return to the touring scene (and our lives) with their happy-go-lucky brand of indie pop, only this time with added synth and snare. 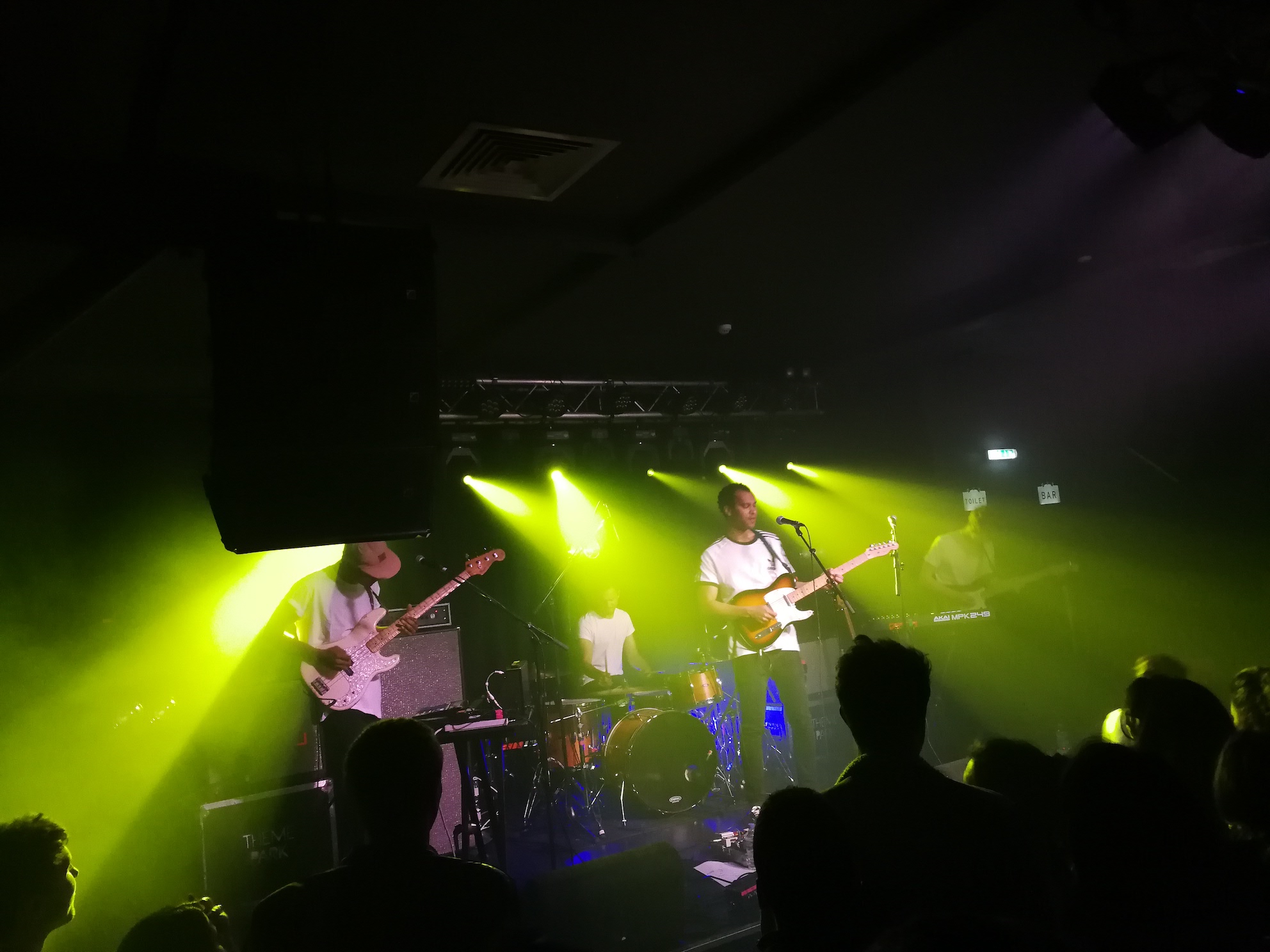 London trio Theme Park make a fizzing return to the touring scene (and our lives) with their happy-go-lucky brand of indie pop, only this time with added synth and snare.

The cool, calm and collected nature of the Nordic countries emanates through the restaurant and bar of Oslo, a venue unsurprisingly inspired by the lives lived by our oft fashionable, bearded friends, that also once upon a time (more surprisingly) served as Hackney’s railway station. Whilst the live music space is upstairs, the gig goers, hungry food orderers and unquenched beer drinkers all have one common feeling - a near-frenzied sense of anticipation.

First on stage, though, is Moondude. The south London six-piece prove that despite the almost angst-encouraging excitement sending waves throughout the filling room, they have "totally got this". Quickly showcasing their love and expertise of shoegaze-tinged strings with Real Estate ease, the opener unexpectedly turns to an edgier guitar-driven chorus with unexpected bite. The vocals are reminiscent of Julian Casablancas not giving a fuck, whilst the cheery keys hark back to a trip to the seaside in an all-round better time. Despite recent single ‘Displaced’ addressing how none of us really know how to feel or where to look, the contrast of the nonchalant hazy guitars and steely baritone vocals allow the audience to mirror the band in bobbing along nicely, thinking we all just might be okay.

Given they’ve been out of our lives for a consequently long, rainy four years, it’s no wonder headliners Theme Park have a little fun with the room. Taking the stage with heaven-like pulsing lights, smoke machine and choir chills, lead vocalist Miles is displaying his highly impressive vocal range and dancing skills from the off, backed by the jungle beats of ‘Tonight’.

The way the band’s style and passions have evolved with the recent release of follow-up album Is This How It Starts? becomes quickly apparent as Marcus ditches his bass in favour of the multiple dance-inducing keys on latest single ‘10AM’. The band are clearly enjoying this turn towards the dancefloor as all three sing along, grooving throughout. The idea that they are a band at ease with themselves comes through during ‘Jamaica’. No band member is outshining another, they're just letting the song they collectively crafted to do its thing. ‘Dancing With The Other Girls’ is a high point as the trio let the tour drummer bring the party. His snare delivers as close to a “drop” as the happy-go-lucky band get.

Next was Miles’ favourite song to perform live, sadly the intricacies and quick-time guitars that make the studio-version of ‘LA (Is Stealing My Friends)’ are converted to a fuzzy, indistinguishable blur in a live setting. ‘Cocoon’ belies the intimacy of tonight’s venue as it provides several moments worthy of drawing far bigger crowds (and their lighters with them, if that was still a thing) to far bigger venues.

One particular moment during ‘Wax’ embodies the spirit of both the band and the evening beautifully: acting as the song’s bridge, the three spend just a few moments riffing off. It feels optimistic, light-hearted, understated and unmistakably Theme Park.