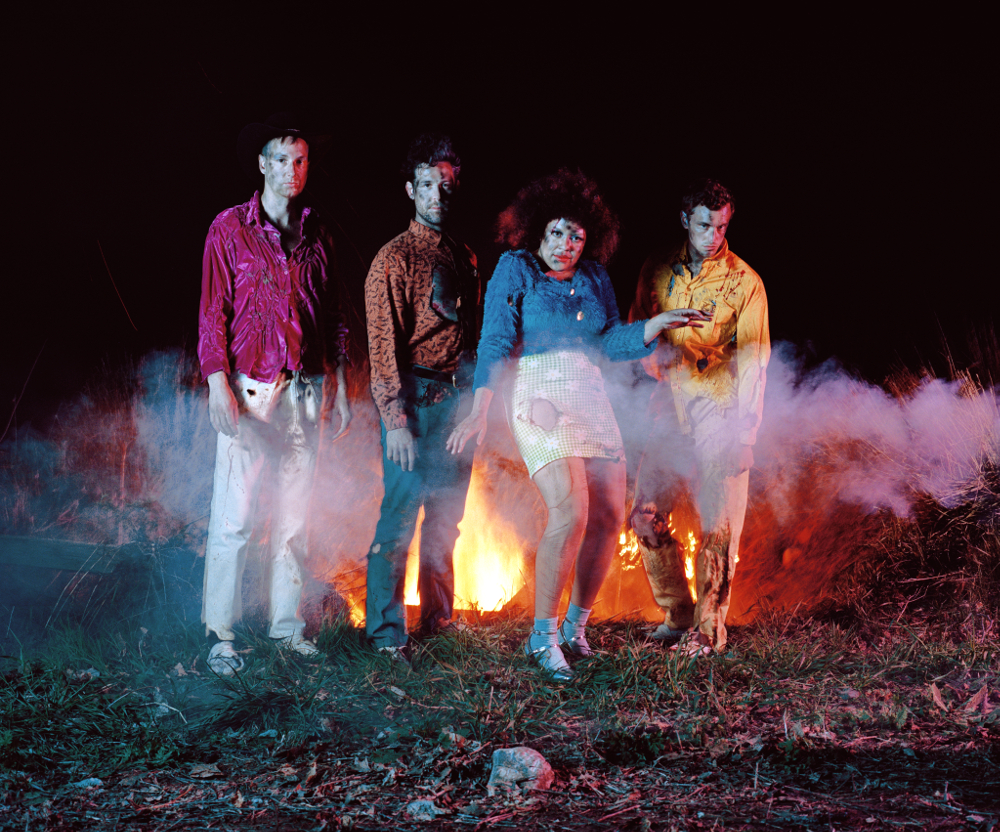 “What’s the world’s shittest wine?” Asks Weaves’ highly charismatic vocalist Jasymn Burke to the capacity crowd that braved the torrential gales Brighton was experiencing – all in the name of receiving a hefty dose of punchy, hook-permeated rock n roll. “Blue nun!” one audience member suggests (other shit wines are available), before Burke settles the dispute, “We tried Buckfast last night for the first time”. The sole Scot in the audience hailed “…love it”, the rest did not. Case closed.

This charming light heartedness is on show throughout the evening as the Canadian outfit play the final night of their UK tour in support of their adventurous second album, Wide Open. For just over an hour they showcased their brand of eccentric pop tunes in a way that was less of a gig and more of a party celebrating a successful trip overseas, and everyone's invited.

Starting the show with an ensemble of orchestrated chaos and feedback akin to Sonic Youth, they lead in ‘#53’; charged with a crazed energy lying somewhere between The Pixies and Pavement. Burke’s trump card is that she delivers lyrics clearly written when she’s fallen on hard times while displaying a grin as wide as her homeland. The songs act as redemption for the troubles that once befell her. The lines, “I know I’m going to cry over you again” and, in the latter stages of the show, “I’m haggard and I’m old and living in a shit-hole” are administered as though she’s just won the lottery, whilst maintaining a controlled fragility in her voice.

For a four-piece they pack a ferocious punch. It’s not all shits and giggles (although there are plenty of giggles), the Torontonians’ sound varies from straight up pop to post punk. Or, from Tom Waits’ circa Rain Dogs (at its most bewildering and Weaves’ most experimental) to early New Order. Tonight all is received with open arms, especially by the handful of ardent fans at the front of the stage (even when they’re tuning up, probably assuming it’s an unreleased abstract number).

As a collective, and on paper, Weaves shouldn’t work. They even style-out mistakes made during songs as though it's all part of the act, which is no mean feat for a band that essentially still needed to win over the majority of the audience tonight. They achieved this by flirting on the perimeter of absolute seriousness and utter chaos, never allowing the balance to shift permanently in either favour. A lesson other bands could learn from them, never stagnate or be content.

The highest compliment I can pay is that they even pulled off a cover of ‘My Generation’ during their encore, without plummeting into cliché. After two months on the road across the Atlantic, if tonight’s anything to go by, they can be safe in the knowledge that it’s a job well done… And that they’re the only band on both sides of the ocean that sell their own brand of lipstick on the merch table.