Welcome to Wester, from 28 Boulevard is charming and honest; it’s a fresh change that celebrates adolescence while never trying too hard. It’s very nearly brilliant. 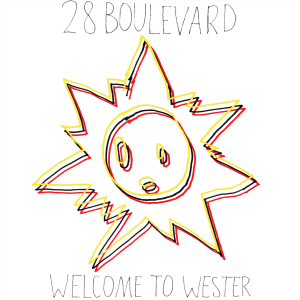 Welcome to Wester, from 28 Boulevard is charming and honest; it’s a fresh change that celebrates adolescence while never trying too hard. It’s very nearly brilliant.

‘Well Hello’ kicks off proceedings as 28 Boulevard master that laid back, sun-kissed, mellow vibe that so many bands strive for and fall short of; it’s both Wavves and Weezer. The drops in pacing are also expert. You might forget you're listening to a new band, swanning that line between polished and rag tag, again, effortlessly. It’s so refreshing. Listening to the vocals as they maintain this unpolished, lo-fi, garage band essence shows them to be humble and honest, and it's appreciated. While at first their unfinished aesthetic felt like a brash and poor decision, it quickly grew to become charming and part of what makes this record breathe personality throughout.

It is clear from the outset that 28 Boulevard ooze this ‘personality’ and, as they wear their influences on their sleeves, they are never trying to embody nor clone them. Even as ‘Cinnamon’ rolls in with an opening that may just be shy of a lawsuit from The Cure, it’s brilliant and yet still undoubtedly 28 Boulevard as the vocals again remain slightly off in the mix and awkwardly fitted. It’s humble and it works. There’s a severe lack of inhibition; they're not trying to sound cool and it pays off beautifully. This same vibe carries right into ‘His Very Own Taste’ and ‘High Five With Knives’, the latter with its in your face chorus that could so easily come off as cheesy if any other band were to kick it around.

Sadly, the quality doesn’t hold out throughout. The EP closes with ‘My Arsonist Friend’ and ‘Sly Days’.  Tim Lloyd-Kinnings vocals drawl in their usual fashion, and by this stage it starts to feel rather grating without the strong melodies of the earlier tracks. No longer effortless, but lazy. The same can be said for ‘Sly Days’, trading in the honest, overtly creative feeling of the earlier tracks for this slowly grinding, wholly tired sound. That said, you should get hold of this EP just for the first four tracks as they’re brilliant. Bands should take note, there is nothing wrong with being shameless: 28 Boulevard douse you in this honest charm and far from being uncool, it makes them fucking exciting.