Send in the clowns, it's that time of year again. 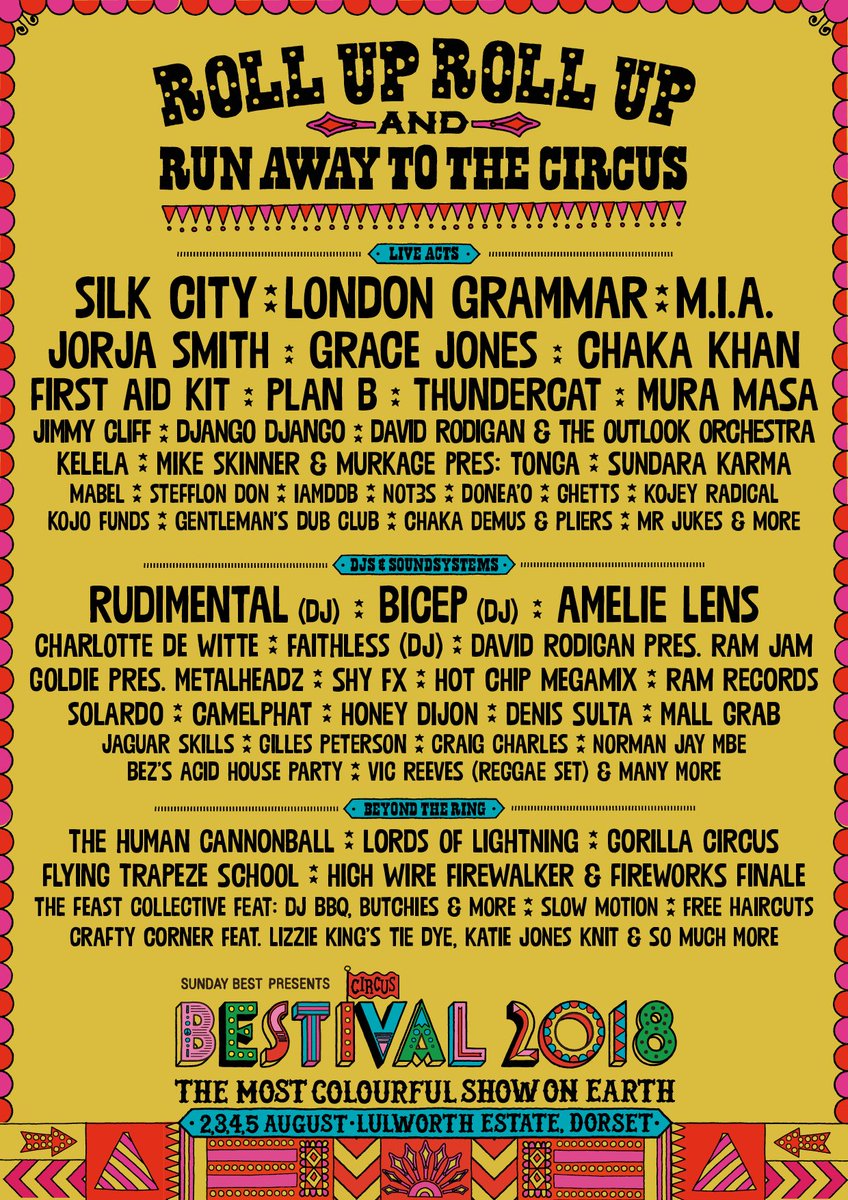 Send in the clowns, it's that time of year again.

There are unbelievably just two weeks to go until we're on the beautiful Lulworth Estate once more. And I thought you might like to know just what the hell Bestival have planned for their 15th(!) birthday.

For starters, I have a mere two words for you; human cannonball.

In what is a pretty big step up from last years' largest confetti cannon in the world, an actual Human Cannonball will be joining us. Known to his mother as Rodrigo Pérez, this handsome nut job will be embodying Bestival's theme this year; the circus.

My new crush Rodrigo says that “Firing yourself out of an enormous cannon takes a man of a high calibre. Luckily, I’m a cannonball kind of guy. Come and be amazed as I shoot through the sky, flying over your crazy, smiling faces.”
What the actual f*ck.

And the line up? There's a huge amount for us to get through as it's an absolute stonker this year, so let's get right down to it.

One never before seen duo are coming together to create the kind of music that can only be made when money is no option; Diplo and Mark Ronson as Silk City. Huh. I'm sure their set will be swimming in the kind of irrepressible hard-hitting bangers that will scar radio playlists for decades to come.

Also hovering at top of the line-up heights, but at the other end of the originality spectrum, is M.I.A. Renowned for high energy hits written with integrity and occasional controversy, she'll be an incredible power house to close Sunday night.

Next on our to-see list are Swedish folk duo, First Aid Kit. Far from the stage opening days of Bestivals past, these two are now right up there with the big fonts. And like most Swedes I've met, they may sound gentle, but they have hearts of pure metal. They're hypnotic to watch, with great fifties melodies, undeniable musicianship and blessed harmonies.

Staying on the gentler side of things, just to ease you in; one of the last true troubadours, Beans on Toast will be at Bestival this year. Still releasing an album on his birthday each year, peddling stories, songs and songs that tell stories in his trademark soft-gravel tones. Beans on Toast is such an engaging performer, you'll feel like you've known him your whole life as you float from his set, enlightened and politically fired.

If you're more into dancing than trying to hide the fact that you're euphorically crying because the man with the acoustic guitar touched your heart, then make sure to see the incredible Songhoy Blues. An accurately described desert blues band from Timbuktu in Mali, the guys got together after being forced to leave their homes by civil war. Sort of puts things in perspective, doesn't it. They take James Brown funk and add scorching, classic guitar riffs to rallying call and response vocals.

Keeping you in your dancing shoes are multi-instrumentalist family band Kitty, Daisy & Lewis. Originally a fifties throwback act, they've journeyed through albums, carving out their own niche. They combine R&B with soul and classic rock n roll while sitting just on the cusp of all the best bits of the seventies (eye shadow included) and their latest single sits somewhere between the Shangri-Las and Suzi Quatro. Recording using only analogue equipment they're a trio of equally incredible songwriters, musicians and frankly, heartthrobs.

I feel like special mention needs to go to House of Vans and their first ever UK festival appearance. What a fantastic line-up they've curated, including, among others, The Big Moon, Fizzy Blood and Superfood.

Superfood craft slightly wonky alt-indie full of summery vibes, dreamy melodies and anthemic choruses. The Big Moon need no introduction these days it seems; they catapult from strength to strength with their harmonics, dulcet tones and roaming bass lines. While Raw Meat favs Fizzy Blood seem to accidentally wander between heavy screaming riffs and dance-grooves. Their singles (and blistering live shows) prove them to be one of the best un-genre-able musical contradictions we've seen. They're already timeless.

If by this point you've found yourself whipped into a frenzy, then follow us to see South London's post-punks, Shame. Feverish guitars and whipcrack beats that only ever drop back to allow for the relentless lyrical lines of Charlie Steen. Their debut album is (more) hit and (less) miss, but their potential looms in the shadows, emboldened by Britain's post-Trump, post-May population, ready and eager to howl a release.

And of course, who else could have embodied the rage of a nation so naturally, but the headliners of my heart, IDLES. Their debut album found me just in time; lyrically, dynamically and musically yanking me back from the brink. Such a promising explosion of intent hasn't been seen in too long. And as their second album does nothing less than the first; succeeding in developing their confidence and risk-taking further, we can all breath a sigh of relief.

Rob da Bank says: “Here come the girls…and a few boys too! Yes, it’s Bestival 2018 and we’re here with the first wave of our all-singing all-dancing line-up. With UK festival exclusive headliners London Grammar and Jorja Smith to legends in the game Chaka Khan, Jimmy Cliff and Grace Jones, and always representing the new blood from Mura Masa and IAMDDB to Mabel and Idles, we’re covering all bases. As any Bestival veteran knows we don't just do music, so come and check our Hot Yoga, Dubstep Dodgem rides, wood-fired hot tubs, AmbientLand craft tent, East 17’s Christmas Party!, and loads of circus-based trickery, including a Human Cannonball, high wire fire walking and a pretty buff strongman popping up on the Main Stage.”

He doesn't even mention their key initiatives likes eradicating single use plastics by introducing recyclable cans of water at all of the bars, with the aim of eliminating plastic bottle sales onsite. And day tickets for the lower-income, just-as-high-vibed partygoers.

The sheer variety of a festival is always worth the ticket, and none moreso than Bestival. There's more than one reason that we just can't keep away.