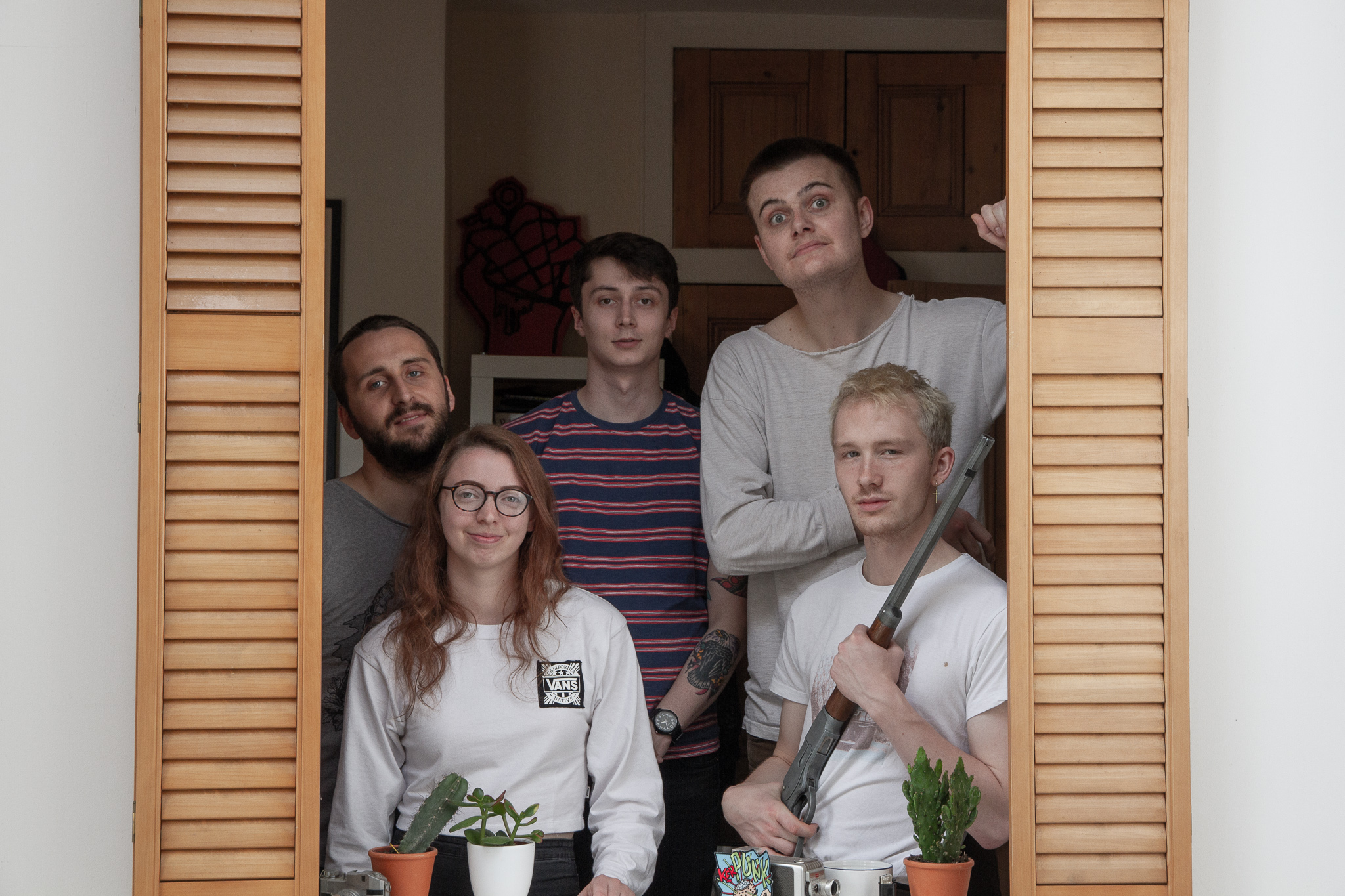 BLOOD-VISIONS are a revolving-member punk collective from Northampton. Sometimes 7-people-strong, including two drummers, a vague number of guitarists and visual artists, their live shows are notorious. Equal parts angry and excited you can hear American alt-punk bristling through them, but their cynical warmth and burning rage are British through and through. Their songs are written with too much breathing space to be trad. mindless punk; they're more post-punk with a throbbing urgency (ew) in riffs and beasts alike.

RAW MEAT: Tell us about your local music scene; what’s your favourite local venue, are there any record labels or stores that we should look up, what’s the scene like where you're from?
Harry: In Northampton there’s quite a tight scene with some incredible bands. When local bands or artists put on local shows there’s a real community that is supporting them. Our label True Friend Tapes are an amazing label to work with so I would 100% recommend them.
‍Joss: Northampton is great! Really varied and all over the place. You get a lot of mixed bills, so most people turn up to shows just expecting “music” and very little else.
‍Lewis: Record-wise you should definitely go to Vinyl Underground on Abington Street. Other businesses I recommend include Londis on the Kettering Road and Shawarma (Kurdish one not the Turkish one) on the Wellingborough road. You can get a falafel wrap and chips for £4.50 and they cook the bread for the wraps right in front of you.

Name one track or band that you love from the past.
Harry: I can’t name one but I really love Joy Division and The Buzzcocks. I love The Smiths too but Morrissey is a fucking twat and keeps ruining it for me.
Joss: I love Talking Heads - watched Stop Making Sense with my family yesterday.
Becca: 'Easier to Run' by Linkin Park.

Name one track or band that you're loving right now.
Becca: 'Lost' - Our Last Night.
‍Lewis: Been playing a lot of The Band's cover of 'Atlantic City' by Bruce Springsteen.
‍Harry: I’m really loving Nick Cave and The Bad Seeds. His new album Ghosteen is so beautiful and incredible and I can listen to it repeatedly. Specifically the song ‘Waiting for You’.
‍Joss: '800db Cloud' by 100 gecs.

Name one track or band that you think we should be listening out for in the future.
Harry: Can’t name one so I’m gonna do like four. At our EP release show we had two bands support; Lift Tower, who are a sort of jazz-chill pop band who are comprised of the most insanely talented musicians in the UK – seriously – and Tragic, who are a loud guitar band playing some rowdy music and are well worth a listen. Our label is run by Katie Malco and she is this incredible singer songwriter who is doing huge things at the moment. She’s really something to look out for next year. Also Big Loss.
‍Becca: Big Loss.
‍Joss -  I second Becca’s choice. Listen to Big Loss.
‍Lewis: 03 Greedo.

‍What are you up to now?
Harry: I’m playing Zelda: Breath of the Wild. I haven’t had time to play much Switch recently but fell in love with the game again. My wife is knitting me a scarf which is cute.
‍Joss: I’m sat on the couch with my girlfriend watching Only Lovers Left Alive, which is very good.
‍Becca: Just chilling, drinking a vodka and lemonade.
‍Lewis: Watching that video of Boris Johnson repeatedly refusing to look at a picture of child sick with pneumonia sleeping on the floor. Which is really really something...

What can we expect from you next?
Joss: We’ll put out more music, I promise.
‍Becca: More shows, more music, and growing the community I already love so much.
‍Harry: Like Becca and Joss said, way more music.
‍Lewis:  I think probably an album….

BLOOD-VISIONS' EP Blood-Visions is out now on True Friend Tapes.